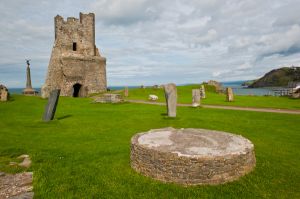 The evocative ruins of Aberystwyth Castle stand on a promontory looking over the harbour. The ruins are the remnants of a late 13th century castle built by Edward I in his push to conquer Wales. There was an earlier castle on the heights of nearby Rhydyfelin, built by the powerful Norman baron, Gilbert de Clare around 1110.
When Edward I needed a new castle to contain Llewlyn ap Gruffudd within his Gwynedd power base, he had his brother Edmund oversee the construction of the current structure, complete with a surrounding borough. Most of the workmen who built the castle were brought to Aberystwyth from Bristol. The workers brought with them the freestone used for most of the doors and windows, while the remainder of the structure was built of hard local gritstone.

The castle was only partly finished when the Welsh rebelled and captured it in 1282, destroying some of the completed work. The following year the construction was resumed under the leadership of the king's master mason, Master James of St George, who was responsible for many of Edward's most impressive Welsh castles. Master James completed Aberystwyth in 1289, at a cost of some Â£4300, a huge sum for the time.

The castle was briefly besieged in 1294 but withstood Welsh attacks. The fortress then went into a period of gradual decay until it was attacked during the early 15th century rebellion under Owain Glyndwr. Glyndwr captured Aberystwyth in 1406 after two sieges, and used it, along with Harlech Castle to the north, as an administrative centre for his brief government of north Wales. The Welsh were finally overcome in 1408, after an English siege that involved the first known use of cannon in Britain (the cannon were not an total sucess; one blew up and killed its gun crew in the process!).

The castle was allowed to disintegrate further over the ensuing centuries, though it briefly saw use as a royal mint. Finally, in 1646 it was garrisoned by royalist troops, who withstood months of Parliamentary attack before finally surrendering. Parliament decided to make sure that the castle could never be used again, and had it slighted. The effect is the ruinous fortress we see today, with partial walls and foundations in a superb setting overlooking the sea.

The layout of the site can clearly be seen; the castle was built to a rough diamond plan, within concentric walls. There were double ringwalls, corner towers, and a pair of gatehouses. The outer ward is in poor condition, but the original, landward gatehouse is still impressive. The interior of the inner ward is dotted with a number of standing stones, as if the castle was built around a prehistoric site, but the truth is less enticing; the stones were erected for the national Eisteddfod of 1915, each one represents a distinct Welsh county.

More self catering near Aberystwyth Castle >> 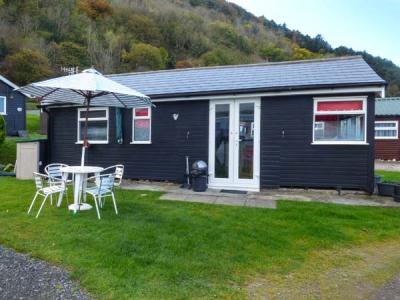 This detached chalet is on a holiday village close to the town of Aberystwyth and can sleep four people in two bedrooms.
Sleeps 4 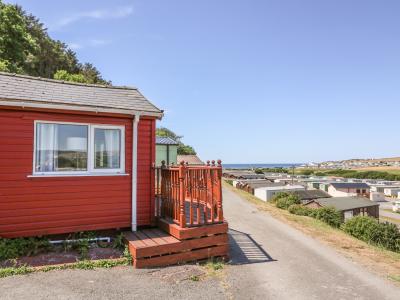 This detached chalet is near the town of Aberystwyth near to Borth and can sleep two people in one bedroom.
Sleeps 2