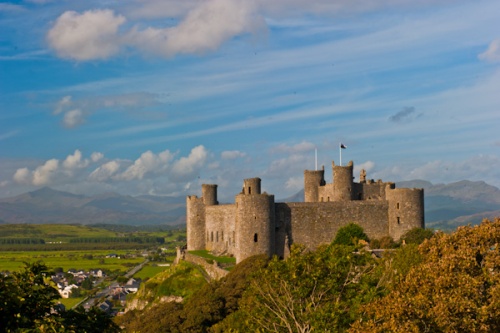 The name Harlech has been translated as 'high rock', an apt description of this striking site atop a high cliff looking west towards Cardigan Bay. Though the site has obvious advantages for dominating the coast, the castle was built by Edward I in 1283, as part of his efforts to subdue the Welsh of Gwynedd. The English lord Sir Otto de Grandison first identified the potential of the site on his march north after sacking the Welsh fortress at Castell-y-Bere.

Edward began three castles in that year, the others being Caernarfon and Conwy. All are undoubtedly impressive, but it is hard not to put Harlech at the top of the list for sheer striking impact. The construction of Harlech was entrusted to Edward's master mason, one James of St George.

James took advantage of the natural defences afforded by the rocky site, building a concentric fortress, and utilising the almost sheer cliff face to the north and west as a natural barrier to attack. He cut dry moats into the solid rock on the other two sides.

One innovation at Harlech was a narrow staircase cut into the rock face, leading down 108 steps to the sea. This so-called Way from the Sea provided Harlech Castle with direct access to the sea, an important feature in a time when ships provided by far the easiest and least expensive mode of transportation. 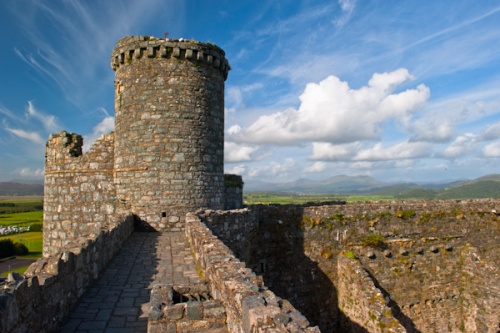 But wait! When you look at the Way from the Sea today you will notice something pretty obvious; the foot of the rock upon which the castle is built is a long way from the sea! How can that be? The answer is simple; when the castle was built, water lapped almost to the edge of the rock, but over the past seven centuries the seaward side of the approach to Harlech has gradually silted up, creating an area of low dunes where once water flowed.

Another innovation at Harlech was the massive gatehouse, into which Master James built living quarters for people of high rank. So the gatehouse served not only as a deterrent to attack but as comfortable living quarters, including a spacious chamber for the castle constable, looking out over the inner ward. Master James himself was appointed constable in 1290 - a fitting reward, one might say, for the man who did so much to advance the art of castle building in the 13th century.

The gatehouse is punctuated with two tall towers with corner turrets built up from the curtain wall, echoing the D-shaped towers of the main gatehouse. The windows of the gatehouse emphasize its dual purpose; to the exterior, the windows are narrow and small, suited to defence.

The interior face of the gatehouse is dotted with three large, traceried window openings on the upper two floors. A wide and stately staircase leads up to the main apartments on the first floor.

Despite these concessions to comfort, the gatehouse was first and foremost a defensive structure. For an attacker to gain entry to the inner ward he would have to cross the dry moat, pass a series of thick doors, two portcullises, arrow slits, and a second thick door. The machinery for raising the portcullises was housed in the chapel, incongruously sited over the gatehouse arch. 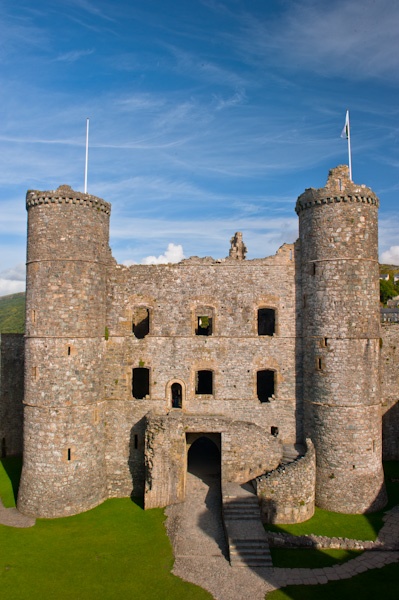 Further domestic buildings were constructed around the walls of the inner ward, including the great hall, where the day-to-day business of living was conducted. There was also a buttery, pantry, screens passage, and kitchen, with a garrison chapel to the north. Beside the kitchen, butting against the south curtain wall, are the 14th-century remains of a hall house, the home of Llewelyn ap Gruffudd, brought here from the nearby village of Ystumgwern.

What more fitting way of emphasizing the power and might of the conquering English king than to transport is enemy's own hall, every stick and stone of it, and place it within the mighty walls of his own fortress?

Building Harlech Castle set back Edward's treasury to the tune of at least 8000 pounds. Over 950 men were involved in the construction process, including 546 labourers and 227 masons. 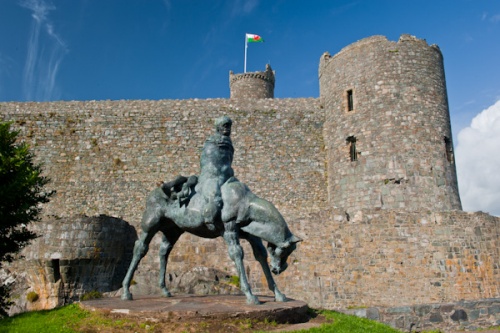 Only five years after it was finished, Harlech was attacked by Madog ap Llewelyn. Madog cut Harlech off on the landward side, but the castle could still be provisioned from the sea. As a result, Harlech withstood the siege. In 1401 another Welsh attack fell on Harlech, under Owain Glyndwr.

The attack failed, but Glyndwr was back in 1404, and this time he succeeded. Glyndwr made his power base at Harlech and established his own family home here. Glyndwr had himself crowned Prince of Wales at Harlech, and here outlined his plans for an independent Wales. But Glyndwr's plans were short-lived; the English recaptured Harlech in 1408-9 under the leadership of Gilbert Talbot.

During the Wars of the Roses, Margaret of Anjou, wife of Henry VI, fled to Harlech, but the castle eventually fell to a siege led by William Herbert, later Earl of Pembroke. This campaign was the inspiration for the marching song called Rhyfelgyrch Gwyr Harlech, which roughly translates as 'The Campaign of the Men of Harlech' (usually shortened to simply, 'The Men of Harlech').

Harlech was held for the king during the Civil War and was the last castle to fall to Parliament. It held out for 9 months under the leadership of the constable, William Owen, and finally surrendered on 16 March 1647.

The 'Men of Harlech' is not the only literary classic associated with Harlech; much earlier is from the Mabinogion, a collection of traditional stories and legends from Welsh history. 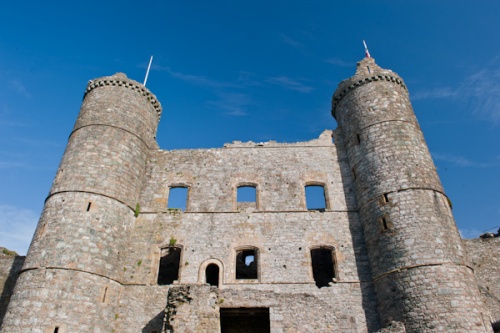 Another view of the castle gatehouse

In one of the Mabinogion tales, entitled Branwen Daughter of Llyr, King Bendigeidfran and his court are gathered at the cliffs of 'Harddlech' when Matholwch, King of Ireland, comes sailing across the Irish sea to ask for the hand of Branwen, the king's sister, in marriage.

A later scene from the tale is portrayed in a sculpture by Ivor Roberts-Jones called The Two Kings, which stands before the castle entrance. The sculpture movingly portrays Bendigeidfran on horseback, carrying the body of his nephew Gwern.

Harlech is one of the most popular castles in north Wales for visitors, and it is easy to see why. The location, atop a rocky outcrop overlooking the Cardigan Bay and the Irish Sea, is simply superb. The town of Harlech itself is not large, and most of its economy seems to revolve around tourism centred on the castle.

Tip: Walk south along the main street from the castle, just past the town car park. Within five minutes you will come to a small park and viewpoint that provides superb views north to the castle and Snowdonia beyond - this makes a great spot for photos of the castle (evening is best). 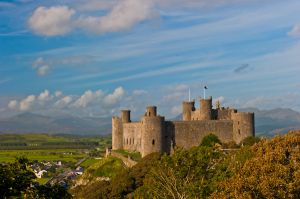 More self catering near Harlech Castle >> 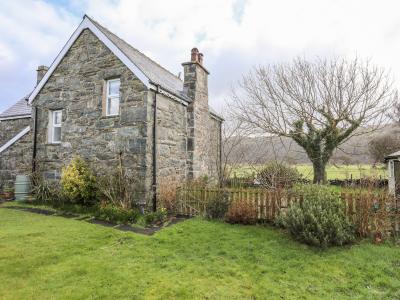 This detached house rests in Harlech, Wales and can sleep eight people in four bedrooms.
Sleeps 8 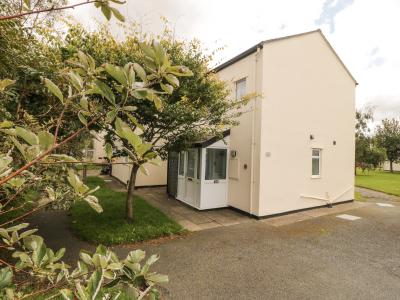 This end-terrace cottage rests in Harlech, Wales and can sleep six people in three bedrooms.
Sleeps 6