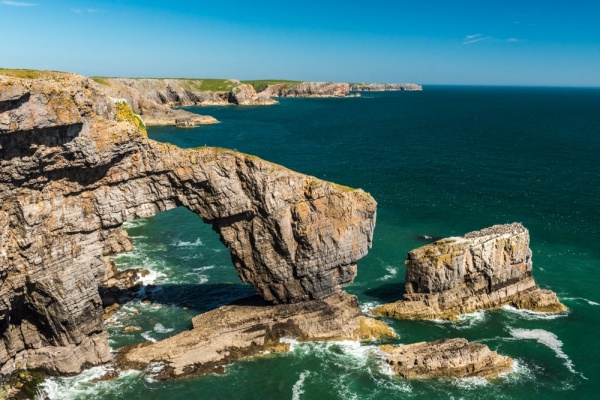 The Green Bridge of Wales

The south coast of Pembrokeshire is known for its dramatic rock formations, and none is more dramatic than the Green Bridge of Wales, a sea arch extending south into The Wash bay. The arch is roughly 80 feet high (24m) high and has a span of 66 feet (20m). The upper surface of the arch is covered with vegetation, giving it the name 'Green Bridge'.

The coastal area is a Site of Special Scientific Interest (SSSI), a Special Protected Area (SPA), and a Special Area of Conservation (SAC) in recognition of its rich geological and fossil heritage. 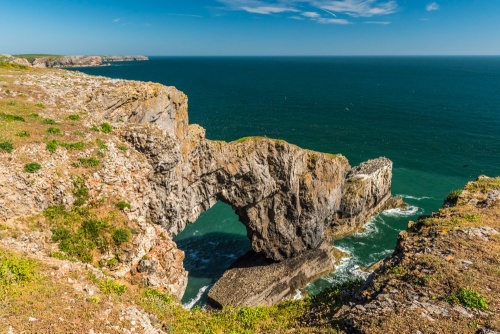 The Green Bridge from the north-west

How was the Green Bridge formed?

The rock along this part of the Pembrokeshire coast is primarily carboniferous limestone. Over time the combination of wind and rain has eroded the stone. The waves crashing against the cliff have driven pebbles into the rock, and the limestone has also been dissolved over time to form deep caves on both sides of a headland.

Over millennia the caves met, creating a passage through the solid rock. Over time the central arch will erode and collapse, leaving the Green Bridge a bridge no more. It will become a sea stack like the neighbouring Stack Rocks.

The obvious question is why the entire rocky headland didn't erode away. The answer is that the far end of the Green Bridge stands on a much harder rock foundation that resists the force of sea and wind more strongly than the limestone.

It should come as no surprise that the area around the Green Bridge is very popular with climbers, however, climbing activity is limited to certain times of the year so it does not interfere with the large population of nesting seabirds. 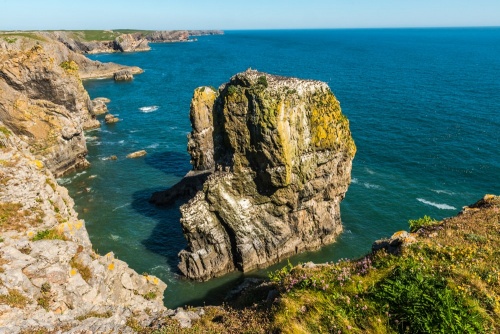 From the viewing platform it is another short, level walk east to Stack Rocks (Elegug Stacks). The name comes from the 'elegug', the Welsh term for the guillemots and razorbills that nest here. Other common species are kittiwakes, fulmars and cormorants and together they make up the largest seabird nesting colony in Pembrokeshire.

The birds nest in ledges on the rock stack and in burrows among the sea-beet and tree mallow that grow on top of the stack. Large numbers of shags nest in holes in the cliff face. So prolific are the birds in this area that when Pembrokeshire National Park was created the elegug was chosen as the new park's logo.

It is fascinating to compare the Green Bridge with Stack Rocks because they form a 'before' and 'after' picture of the effects of coastal erosion. 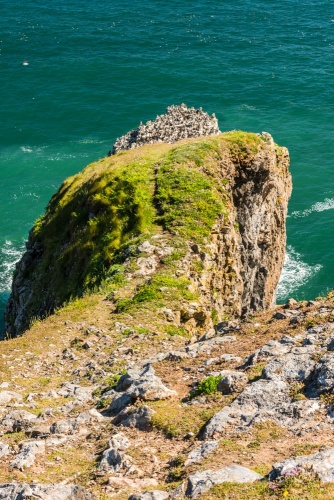 Walking down the Green Bridge

Stack Rocks and the Green Bridge of Wales lie within the Castlemartin army tank range. Though it is usually open to visitors the access road from Merrion can be closed at any time for firing practice. It is worth calling ahead with the Castlemartin Range at 01646 662367 or the Pembroke Visitor Centre at 01437 776499. These phone numbers were correct at time of writing.

The Green Bridge was in the news in 2017 when Hurricane Ophelia caused it to lose a large amount of stone from the outer block of the arch. That loss may well hasten the demise of the arch.

From the Stack Rock parking area at the end of the military road it is a short, level walk to a viewing platform giving good views of the sea arch. You can see the arch even better without using the viewing platform, but do take care as there are no fences and it would be easy to slip over the edge if you aren't careful. If you are feeling very confident you can walk out onto the Green Bridge. Just be aware that there are no fences or any kind of protection and it's a long way to the rocks below if you slip.

If you are feeling energetic you can extend your walk to take in the Iron Age promontory fort known as Flimston Bay Fort to the east, or extend your walk even further to St Govan's Chapel and Holy Well. Beyond the Chapel lies the popular Bosherston Lakes.

The Green Bridge of Wales has been featured in our 'UK Travel Photo of the Day'. 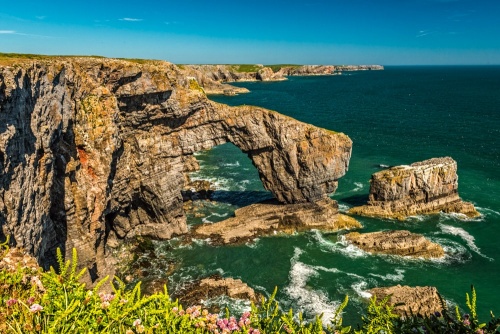 The Green Bridge from the viewing platform

About Green Bridge of Wales
Address: Merrion, Pembrokeshire, Wales, SA71 5EB
Attraction Type: Countryside
Location: At the end of a minor road off the B4319 at Merrion. Access is through the Castlemartin Firing Range and is open only when not in military use.
Website: Green Bridge of Wales
Location map
OS: SR924944
Photo Credit: David Ross and Britain Express

More self catering near Green Bridge of Wales

More bed and breakfasts near Green Bridge of Wales