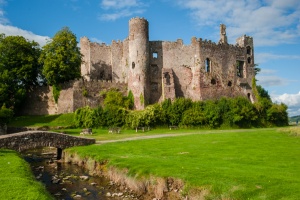 Carmarthenshire has a variety of scenic attractions. In the north and central areas gentle green hills and valleys reign, while the southern part encompasses a coastline of cliffs and sands: the Cefn Sands, the Laugharne Sands and the Pendine Sands of Carmarthen Bay. Two river valleys, the Teifi-part of Brecon Beacons National Park-and the Tywi, provide wooded gorges. Wherever you go there is something of interest.

The Dan-yr-Ogof showcaves is the largest showcave complex in Northern Europe. Two curious men accidentally discovered it. There is much still waiting to be explored in this huge complex. The site, located on the edge of Brecon Beacons National Park, is a "Site of Special Scientific Interest".

Carreg Cennan Castle, near Llandeilo, is situated atop a precipitous limestone crag 300 feet (100 m.) above the valley floor. A climb from the valley is necessary to reach it, but the views over the green hills and countryside are worth it. Originally a Welsh site, it was conquered by Edward I. What we see today survives from the 14th century. Both the English and Welsh held the castle during the medieval period. 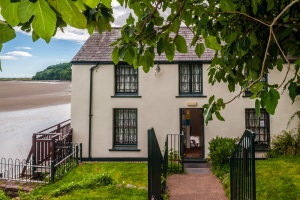 The Dolaucothi Gold Mines, a scheduled ancient monument, is located just outside the village of Pumsaint. The Romans removed over ½ million tons of rock, leaving behind chasms and pits where they mined the gold veins. The Romans left in the 4th century, leaving barracks, bathhouses and other town remnants. There was a short burst of underground mining in the 1930s that didn't last.

Cenarth is a small village of historical buildings, including a medieval mill (non-functioning) and pub (still dispensing). The bridge over the River Teifi allows for great views of the low falls. The National Coracle Centre tells the fascinating history of coracles, a fascinating mode of river transportation. In the past men made a living fishing the river. Today, coracle races and the beauty of the village are the main attractions. 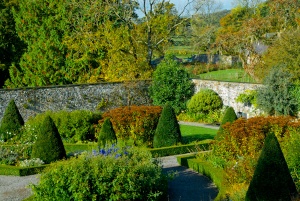 Aberglasney, a garden "lost in time", is a fascinating site in the process of restoration. Set in the beautiful Tywi Valley, the garden and the decaying mansion on the site were abandoned to the elements until re-discovered. The house and property passed through various hands over the centuries until, around 1950, it became vacant. Now owned by a trust, the gardens are being restored, but the mansion is past renewal and mostly roofless.

One of the interesting features is a yew tunnel planted in the 18th century. A cloister garden parapet allows you to walk along the top of the walls for views over the garden below. It's quite an atmospheric spot.

In contrast, the National Botanic Gardens are about as modern as you can get. The main purpose of the garden is not to display fancy blooms but to provide an educational facility for research, sustainability and conservation. Plants were gathered from 10 countries and five continents. The centrepiece of the garden is the Great Glasshouse-the largest single-span glasshouse in the world at 328-ft (100m) long and 164-ft (50m) wide. It's not a tropical paradise but a Mediterranean garden watching over the most endangered species in the world.

Pembrey Country Park, an eight-mile (13km) long sandy beach, the Cefn Sidan Sands, is just down the road from Kidwelly. This is a perfect family holiday spot with train rides, golf and camping. 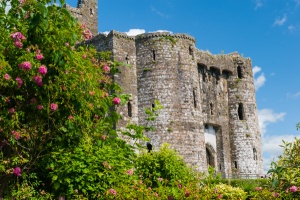 Kidwelly Castle's substantial remains are a rebuilding of an original 12th-century castle on the same site. Overlooking the tidal water of the River Gwendraeth, it kept guard on the coast for the Normans and construction continued off and on through the 16th century. In the 1500's it belonged to the Tudors. A gatehouse constructed in the 1400s still stands in the town.

Its once famous resident, the Welsh poet Dylan Thomas, put the village of Laugharne on the map. He is best known internationally for his play, "Under Milkwood". His most famous poem is "Do Not Go Gentle Into That Good Night." An alcoholic, he died at the early age of 39. He lived in the Boathouse, now a heritage centre, and is buried at St Martin's Church in the town. There is also a superb medieval castle in the village.

The National Wool Museum near Newcastle Emlyn provides an insight into the woollen industry by displaying the techniques and technology of yesterday and providing, at the same time, a working woollen mill. The process from wool to cloth is demonstrated. Visitors also learn about the community that was a vital part of the mills.

This ground floor apartment, formerly a stone barn, has been converted into a spacious studio with enclosed shared rear garden situated near to Llandysul and can sleep two people in …
Sleeps 2 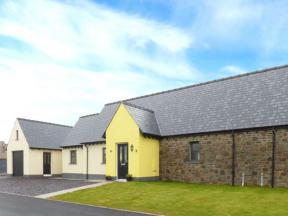