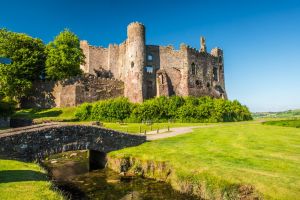 Laugharne is a medieval castle that was later transformed into an Elizabethan mansion. It occupies a clifftop site overlooking the River Taf that was used at least as early as the Romano-British period. The castle was created in the early 12th century as a small earthwork fortification defended by a ringwork enclosure.

That early castle was extended and largely rebuilt in stone in the latter part of the 12th century. It may be the 'Abercorram' castle captured by Lord Rhys in 1189. If so, it was sacked by Llewelyn ap Iorwerth in 1215. It definitely suffered in another Welsh uprising in 1257, at which time it was held by the Norman de Brian family.

The 13th century castle consisted of an inner court enclosed within a wall and ditch, and defended by a pair of sturdy circular stone towers. The inner fortifications were set inside an outer court with a huge gatehouse to the north. The gatehouse looked out towards a new borough, or planned town, which developed on the landward side of the castle.

One of the unusual features at Laugharne Castle is the striking medieval domed roof in the north-west tower. This is one of the largest medieval domes in Wales. It may not come across in these photos, but in person it is really amazing how the medieval masons managed to create the structure. It is a testament to their skill that the dome is still intact. 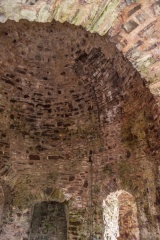 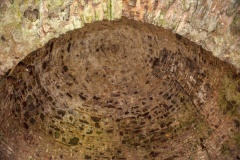 Close-up of the dome

The de Brians held Laugharne Castle until the 14th century, and it was they who replaced the wooden fortifications with the strong stone walls and towers we see today. Henry IV ordered Laugharne Castle refortified to counter the threat of Owain Glyndwr in 1405. Sir John Perrot (see Carew Castle) extended the domestic buildings, but his improvements were brought to an end when he was imprisoned for treason. Perrot was a fascinating character; born in 1528 into one of the most influential families in Pembrokeshire, he was a staunch Protestant.

Despite his religious inclinations he managed to convince Mary I to grant him Carew Castle. He rose even higher under Elizabeth I, who made him Lord Deputy of Ireland in 1584. But his success brought Perrot enemies as well; he was cast into the Tower on a trumped up charge. He was condemned to death, but died before the sentence could be carried out. Ironically, it seems likely that Elizabeth was about to issue a pardon when he died in November, 1592.

Laugharne Castle reverted to the crown on Perrot's death, and an extensive survey of the estate gives us a good picture of the castle at the end of the 16th century. The survey describes a fountain in the inner court, a stately stair and a 'faire hall, at ye upper end whereof is a great dyning chamber'. One gets the impression of a comfortable Elizabethan mansion rising from the medieval castle.

Laugharne Castle was badly damaged in the Civil War period, as were so many other castles in south Wales. In 1644 it was captured by a Royalist force under Sir Charles Gerard, but after King Charles's defeat at Marston Moor in July of that year Gerard withdrew into England, leaving only a token garrison. In October 1644 a Parliamentarian force under Major General Rowland gathered 2000 men and besieged the castle. The castle garrison held out for a week, but after the Parliamentarians launched a night attack the garrison surrendered.

By this time the castle had already begun to be transformed from a military fortress into a comfortable home. The two large round towers in the inner ward were connected by a Tudor hall. In the 18th century a new mansion house was built in the 16th century castle gardens, and finally, part of the castle grounds were altered in the Victorian period to create a picturesque garden. 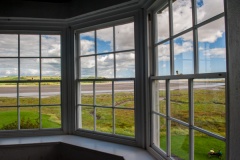 Interior of the Summerhouse

Laugharne Castle has several literary associations. For many years Castle House was occupied by Richard Hughes, author of High Wind in Jamaica and In Hazard.

The town of Laugharne was also the home of poet Dylan Thomas, who captured the beauty of the castle ruins in several of his poems. Both Thomas and Hughes used a small summerhouse built into the castle wall as a writing retreat. A short walk along the shore or following a signposted path along the top of the cliffs brings you to Dylan Thomas's Boat House, where the poet lived for the final four years of his tragically short life.

There is a well-signposted car park below the castle, by the shore, and you can walk below the towering walls and come around the castle from below, or follow an even shorter route to the main gates on the town side of the parking area. The lower route gives you a good look at the summer house used by Hughes and Thomas, which projects out from the medieval wall like some sort of modern castle tower.

Though the exterior of the castle seems like a perfectly preserved medieval fortress, the interior preserves much more the sense of a comfortable Tudor mansion, with the 16th century gatehouse giving an impression of aspiration to grandeur rather than a grimly defensive structure. The castle buildings are largely ruinous, though you can climb a spiral stair to the top of a tower and look down on the site from a wonderful vantage point. The tower gives you an excellent view of the later gardens, with carefully trimmed hedges creating a formal pattern of walkways.

Our family enjoyed Laugharne, though in truth it did not take us terribly long to explore the ruins. The setting is wonderful, with terrific views across the Taf estuary.

This unpronounceable castle sits atop a crumbly, reddish cliff, surrounded by tough shrubbery. At the end of a long day, it was not at first a welcome sight. It seemed more pleasant to look across the salt marshes than climb a steep hill. Along a causeway parallel to the coast, up a concrete path, through some cobbled alleyways, then past the Texan grill, I finally reached the castle the long way around. Once inside, though, I realised it was worth the walk. Laugharne Castle is no longer a castle. It is a garden feature. I would call it a folly, were it not authentic. But it has been treated as a folly for some time. A pleasant formal garden surrounds and assimilates it, turning it into a quiet, relaxing place, perfect for resting at the end of the day.

Richard Hughes, the 20th Century novelist, must have thought so too. He lived in a comfortable town house nearby, and wrote several poems, short stories, and novels in the small summerhouse nested on the curtain wall, overlooking the sea. Presumably he had furniture. The summerhouse is now bare apart from a small fireplace, and the only flat surfaces are the windowsills. It's a stark contrast to Dylan Thomas' shed further along the cliffs, furnished with a desk, electric lights, and a few family photos. I imagine Thomas sitting back, puffing a cigarette pensively, and Hughes trembling from cold as he writes. It must have been more comfortable than it is now, but Hughes did spend some long harrowing days writing constantly, with his family waiting outside expectantly.

Back to the castle. There's not really much to say. The keep is a ruined shell, and part of the curtain wall remains. You can climb a tower and see a few rooms. One is a wine cellar with what looks to be seats for watching the wine shelves. I suppose it could be interesting after a few bottles. In general, there seems to have been little maintenance, apart from the interior plasterwork. The location is the attraction here. The castle looks out over salt marshes and an estuary, a brisk and calming view. It is a place to be idle, and retreat, for a few hours, from the hectic outside world. There's not really much to do at Laugharne Castle, and that is exactly why it's worth a visit. 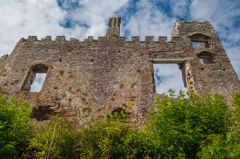 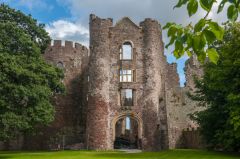 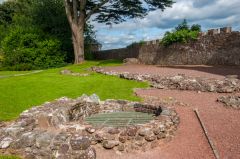 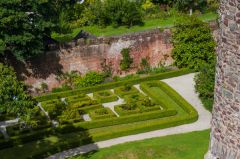 More self catering near Laugharne Castle >> 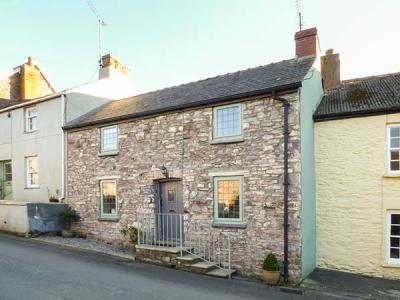 This quaint terraced cottage is in the village of Laugharne in Camarthenshire and can sleep five people in three bedrooms.
Sleeps 5 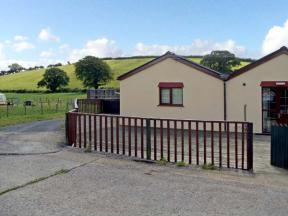 This single storey cottage is located in the South Wales town of Laugharne near to Tenby and can sleep six people in three bedrooms.
Sleeps 6