Virtual Tour of Wales - Swansea, Gower, and the Vale of Neath 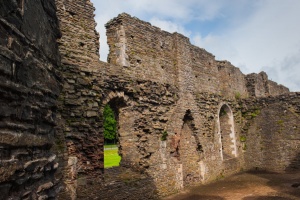 In 1700, Swansea was a small village of only 300 people clustered around a medieval castle. Today, the port city is Wales second largest with close to a quarter of a million people.

Details of Swansea's history and industrial past can be found at the National Waterfront Museum, in refurbished waterfront warehouses, where a 600 berth marina is located. The Museum features vintage and antique motor vehicles, historic boats and ships and the industrial and maritime history of the city. Neath Abbey Woolen Mill is at the Maritime Museum on the Quay. You can watch garments being made on an 1840 great spinning wheel, then buy them later in the gift shop.

In medieval times, Swansea's nearby coal deposits were mined. With industrialization in the 1800s, Swansea boomed as a coal-producing and shipping area. But it was copper smelting that added the finishing touch to the area's environment as ships from around the world brought copper here for processing. The atmosphere soon became polluted with acid, damaging the land and ending the agriculture in the area. 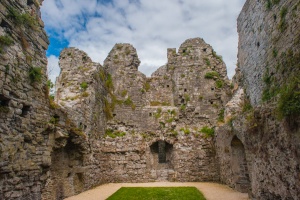 Interestingly, sailors from Swansea sailed all the way to Chile and back, trading copper. The trip took more than a year, and those who survived were known as the Swansea Cape Horners. To be called a Cape Horner was the highest accolade a seaman could earn, and Swansea boasted more "Horners" than any other British port. Tinplate production and nickel, gold, silver, arsenic and cobalt refining, as well as lead smelting were other industries in the valley area. Fortunately, most of this industry closed down by the end of the 19th century. Unfortunately, the valley was changed forever.

The second disaster to hit Swansea was the Blitz of 1941, when 3 days of German bombs, aimed at destroying the waterfront docks, reduced most of the Victorian city centre to rubble. A few individual buildings-among them the Swansea Grand Theatre-escaped. By some quirk of fate an entire street, Wind Street, was left intact. The street dates back to medieval times, when it served as the town's main thoroughfare. Today there are pubs, cafes and restaurants lining the street. The No Sign Pub is one of the oldest buildings in town.

Swansea Castle, in the city centre, was built in the late 13th/early 14th centuries by the de Braose lords of Gower, William II and William III, and their descendant, John Mowbray, added to it. In the late 18th century it became, for a while, a debtor's prison. The ruins of the castle are now part of a large plaza, which contains a cascading waterfall, making for a pleasant picnic spot on a sunny day. 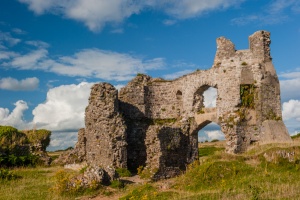 The Swansea Market, located in the city centre, is well worth a visit. Fresh fish, local cheeses, vegetables, pies, and cockles and laverbread are available. Pick up a picnic and go for a walk or bike ride along scenic Swansea Bay-a five-mile waterfront path. Plantasia is another attraction in the city. It contains 1000 varieties of rare and unusual plants in a tropical glasshouse environment.

Dylan Thomas, one of Wales' most famous writers, was born in Swansea. The Dylan Thomas Centre has a year-round program of literary events with a room of Thomas memorabilia, books about, and by, the poet and an AV program. A festival is held in the fall, and there is a city trail of landmarks associated with his early life. The Clyne Gardens, further out from the city centre are in bloom with rhododendrons and azaleas in the spring. Attractive paths skirt a stream and hillside; there are treed and open areas.

Oystermouth is the name of the small village in the Mumbles area. The Mumbles area, the most populated of the Gower, is located at the beginning of the Gower peninsula, strung along the coast from Swansea. There is a walk and cycle way from Swansea as well as a road. The village became popular in Victorian times. It caters to tourists with eateries, entertainment, shops, and places to stay. There is a scenic walk to the top of the cliff. Oystermouth Castle is an early Norman keep popular with Georgian and Victorian artists. 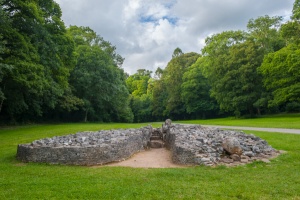 The Gower Peninsula is accessed by travelling south through the city of Swansea. This small but scenic peninsula is home to many historic churches. There's an old mill and other interesting exhibits and historic information at the Gower Heritage Centre at Parkmill. The Gower is well known for its fresh seafood, and there are a number of excellent restaurants. Cockles are harvested on the northern shore at the village of Penclawdd, site of the small Penclawdd Shellfish Factory, which can be visited.

The peninsula is also the site of several castle ruins and prehistoric burial sites - Parc le Breos is one of the larger ones. Above the Llwchwr estuary stands dramatic Weobley Castle, erected by the powerful de la Bere family in the early 14th century. More fortified manor than castle, Weobley was expanded in the 15th century and provided with a tall, arched entry. Visitors can ascend to the solar, or lord's private chamber.

Above Oxwich Bay is the 16th-century mansion of Oxwich Castle. Built on earlier medieval foundations, the mansion is built in two ranges about a courtyard.

The southern and western coasts of Gower consist of dramatic cliffs interspersed with sandy beaches - Oxwich Bay is a very popular large sandy beach with dunes and cliffs that are a national nature reserve. 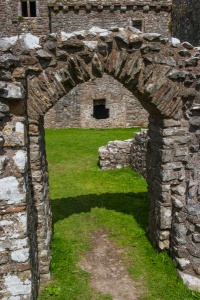 The most famous beach is Rhossili Sands on the western coast. Near Three Cliffs Bay is Penmaen Old Castle, a 12th-century earthwork, Penmaen Megalithic Tomb, and Old Church - remains consist of only a stone wall, but supposedly a whole village is buried under the sands. Surfing, sailing, walking, and fishing are popular sports on the peninsula.

The Vale of Neath is a narrow valley with steep wooded hills and waterfalls. The 80-ft waterfall at Resolven is worth a visit as is the one at Aberdulais. Nearby are the restored and preserved remains of an industrial site. The Cefn Coed Colliery Museum tells the story of the former coalmine, the world's deepest. A working sawmill and museum are located at Seven Sisters' Museum along with 18th-century woodworking machinery.

Neath is an industrial town at the foot of the Vale of Neath. Like Swansea, copper work polluted the air and landscape. Huge oil refineries now dominate the area. Cistercian monks founded Neath Abbey in the early 12th century, at the same time as the castle (little remains), but was rebuilt in the 14th and 17th centuries. Later a mansion was built in part of the Abbey. The Abbey's remains are discoloured by the many years of copper smelting. 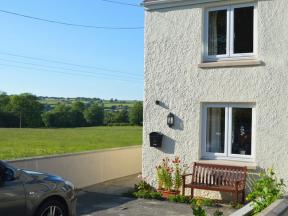 This property enjoys a quiet rural location in the West Wales countryside and is perfect for those who enjoy going out into the countryside and enjoying relaxing walks. Four miles …
Sleeps 5 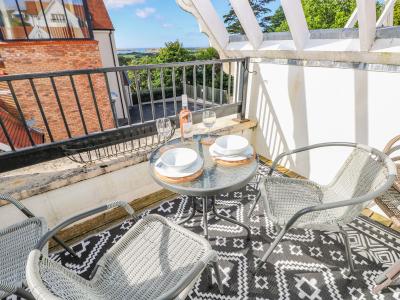