The Accession of Elizabeth I 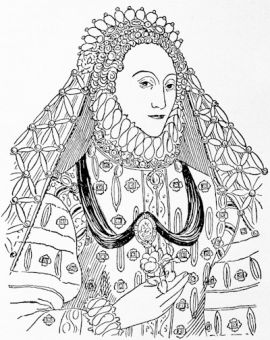 Queen Elizabeth, from the painting attributed to Marcus Gheeraedts in the National Portrait Gallery

Elizabeth, the daughter of Henry VIII and of Anne Boleyn, was five-and-twenty years of age when she came to the throne. At that moment she found herself with an empty exchequer and a ruined fleet; with a country engaged in the interests of Spain on a French war which could only be disastrous. Financial dishonesty and the debasement of the coinage had disorganised trade; agricultural depression was at its worst, having been aggravated by bad seasons.

Pestilence too had been at work, and the country had been sickened by the religious persecution. Since the death of Cromwell, no statesman had emerged whom the world could recognise as an efficient guide and support for the young queen; there were clever men in Queen Mary's council, but those whose honesty was to be relied on were not amongst that number. The outlook would have been black enough for a new king whose title to the throne was beyond cavil. It seemed still blacker for a girl of five-and-twenty whose title was very far indeed from being indisputable.

For there was a claimant, a possible claimant, in whose favour the whole power of France might be exerted in conjunction with that of Scotland. Mary Stuart, now nearly sixteen years old, had just been married to the Dauphin Francis. As a matter of legitimacy she was beyond all question the heir of Henry VII unless Elizabeth herself was legitimate.

Moreover, apart from the question of Rome, the mere fact that Mary Tudor had taken priority of Elizabeth without any formal act of legitimation was incompatible with the theory that Elizabeth was herself legitimate. In plain terms, the queen's title rested on the fact that she had been nominated to the succession by her father's will, with the express sanction of parliament; a sufficient title as it proved in the eyes of the nation, but entirely futile in the eyes of legiti­mist upholders of divine right.

The Mary Stuart factor
For nearly thirty years of Elizabeth's reign, the existence of Mary Stuart and her title to the throne remained a cardinal factor in policy. So vital was it now that the Spanish court assumed that if she were sane, she must recognise that the security her own crown depended entirely on her retention of the goodwill to Nevertheless, to the intense indignation and disgust of the Spanish ambassadors,

Elizabeth, with a complete disregard of the wishes of Spain, established an administration as capable as England had ever known, and followed out her own perfectly independent policy. She had her father's genius in the selection of ministers, and had already chosen for her chief counsellor a consummate administrator who was at the same time exceptionally shrewd and absolutely trustworthy.

Cecil the administrator
William Cecil was no idealist, but he was perhaps the most level-headed opportunist who ever served an English monarch. Cecil and Elizabeth saw with unerring clear-ness of vision that she, not Philip, was in fact mistress of the situation. Philip could not afford at any price to allow Mary Stuart to become Queen of England.

For Mary was already Queen of Scotland; she would in the natural course of events become Queen of France; and if she became queen of England also, France, England and Scotland, united under a single crown, would form a power destructive to the Spanish ascendency in Europe, completely severing Spain from, the Netherlands by sea as well as by land. Hence, whatever Elizabeth might do, it was absolutely imperative for Philip to maintain her on the English throne. She was under no necessity for seeking his support, since for his own sake he was bound to give it.

On the other hand, the fact that Mary was the prospective queen of France gave Elizabeth additional security within her own realm. The nation had had a very unpleasant taste in the last reign of the effects of having a queen whose consort was King of Spain.

If Mary Stuart, queen of France and Scotland, were queen of England, France would be the leading State in the combination, and English policy would inevitably be made subservient to French policy. Whatever the religious leanings of the majority of the population might be, two-thirds of the Romanists would certainly not stir a finger to set a French queen on the English throne.

But it was imperatively necessary to arrive at a religious settlement which should give the country religious peace. Was Elizabeth to follow, a Romanist or a Protestant policy? She could not if she would be frankly Romanist, because that would involve her own admission of her own illegitimacy, while it would deprive her Protestant subjects of their religious grounds for supporting her, and might even drive them to fall back upon asserting the claims of Catherine Grey, the sister of Lady Jane.

Moreover, a Romanising policy could not stop short at a mere reversion to the position at the end of the reign of Henry VIII, which was what Elizabeth herself would certainly have chosen. Nor was that a policy which could have found support from the men on whom the queen knew that she must rely. A Protestant settlement was the only possible solution.

Marriage
There still remained an undecided question of great importance. Whom should the young Queen of England marry? All England took it for granted that she must marry somebody, if only in order to settle the succession. Elizabeth herself had probably made up her mind from the outset that she would not marry at all, though no statesmen either at home or abroad ever believed that this was her real intention.

She did not mean them to believe it. She recognised in her own unwedded state an eternal diplomatic lure. Until she should be married, her hand was a prize which could be made the subject of negotiation; once she was married, an actual husband in the flesh would certainly be an incubus. And accordingly for five-and-twenty years of her reign she retained the possibilities of a marriage with herself as an invaluable diplomatic asset.

Battle of the Boyne

William III of England defeats James II in Ireland, foprcing James to temporarily abandon his plans for an English invasion