The Reign of Queen Mary I 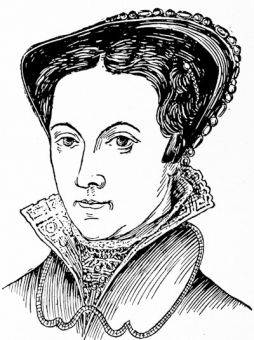 Queen Mary, from a miniature painting by Luis de Varga, 1555

The Spanish Marriage
In the summer [of 1554] Mary and Philip were married. The parliament which met between the rebellion and the marriage showed the state of public feeling by refusing to restore the persecuting acts directed against heresy, or to exclude Elizabeth from the succession; on the other hand, the tendencies of the government were disclosed when those of the clergy who had availed themselves of the statute passed in the previous reign to take to themselves wives were deprived of their benefices.

A new parliament which met in November was more complaisant. There was a formal reconciliation with the papacy, when the queen's cousin Cardinal Pole was received as legate and solemnly pronounced the absolution of the repentant nation. Gardiner from the pulpit confessed his own sin in the past; for, indeed, he had taken an active part against the Pope in Henry's quarrel, although in other respects he had resisted the Reformation.

National repentance, however, stopped short of the restoration of ecclesiastical property, and it was soon to be made clear that a part of the nation had in no wise repented. The reaction for the moment, however, was triumphant. The new parliament restored the persecuting Acts, and repealed the whole of Henry's anti-Roman legislation, always excepting his confiscations of Church lands.

The Marian persecutions
In January 1555 began the great persecution which converted the people of England to a passionate Protestantism. It was sanctioned by parliament and pressed forward by the Council collectively, though not without opposition from some of its members. It was not encouraged by Spain, for Charles V had learnt by experience that persecution is unpopular, and it was the policy of Spain to minimise the unpopularity of the Spanish marriage.

During the first year it was probably directed largely by Gardiner, and throughout that period it was consistently marked by the selection of conspicuous victims, pointing clearly to the idea that such drastic action would achieve its end without any prolonged and miscellaneous persecution; and it is only fair to remark that, throughout, the most vigorous of its agents, the restored Bishop of London, Bonner, made strenuous efforts to induce the victims to recant and be pardoned rather than to send them to the stake.

But there is one outstanding fact which marks the Marian persecution apart from all other persecutions which have taken place in England, In every other case the pretext was political. In this one case there was no official pretence of any other purpose than the suppression of false doctrines. For more than two centuries afterwards, Romanism was penalised by English governments cruelly and sometimes even savagely, but always on the plea that Romanism was a political danger — the plea on which Christianity itself had been persecuted during the first three centuries of the Christian era.

The Marian persecution put forth no such plea, and for that reason it has been indelibly stamped on the British mind as the one example of a religions persecution; though to this reason must be added another, that it was the one persecution in which the stake played a prominent part, and the stake appeals to the imagination more luridly than any other method of persecution. The three hundred martyrs of Mary's reign made an infinitely more vivid impression on the popular mind than all the rest of the martyrs English or Irish, Romanist or Protestant, who have suffered for conscience' sake; more vivid even than the twenty thousand Huguenots who were slaughtered in the massacre of St Bartholomew.

The first martyrs
First of the martyrs was Rogers, reputed to be the author of the great translation of the Scriptures known as Matthew's Bible. He was followed by men renowned for their saintliness: Rowland Taylor of Hadley, and Bradford. Then came the bishops Hooper and Ferrar, and in the autumn Ridley and Latimer, and then the man who for more than twenty years had been primate of all England, Archbishop Cranmer.

Cranmer's legacy
Him the world has chosen to despise. To the extreme Protestants he has appeared as a Laodicean, a temporiser; those who take the high Anglican view of the priesthood cannot forgive the man who, holding the highest office in the Anglican Church, deliberately acted on the principle that the Church is subordinate to the State. Cranmer alone among the martyrs gave way in the terrible ordeal and recanted; but to Cranmer came the reward of the sinner who repents, for at the last in utter abasement of soul he repented and repudiated his recantation; nor did any one of the martyrs suffer the last torments with a more unflinching courage.

The effect of the persecutions
The roll of the victims in the first twelve months numbered about seventy, nor was there ever much variation in the persistence of the persecution. But after Cranmer no person of prominence was sent to the stake; all were humble folk, harmless, with no widespread influence while they lived, whose martyrdom made a hundred converts for every one whom they had made in their lives.

Mary had not shrunk from the terrible duty, as she conceived it, of saving the souls of her people from eternal flames by destroying the bodies of a few in earthly fires. She lived long enough to feel, or at least to fear, that the sacrifice was in vain; for instead of extirpating what she had accounted heresy she had ensured the victory of Protestantism.

Save for the splendid heroism of the martyrs, the tragedy of Mary's reign is unrelieved. There was no relaxation of the agricultural depression, no mitigation of the financial chaos. France and Spain were at open war in 1556; Charles V had just abdicated and Philip was King, Lord of the Spanish and Burgundian dominions, while his uncle Ferdinand held the Austrian possessions of the house of Hapsburg, with Hungary and Bohemia, and the Imperial Crown remained with the Austrian branch of the house.

The loss of Calais
England was dragged into the French war, which was unpopular because it was the direct outcome of the Spanish marriage. Moreover England was in such a strait that she could put neither an effective fleet on the seas nor an effective army in the field. The crowning disaster came when at the close of 1557 Calais was besieged by the French and was forced to surrender in the first week of the new year.

Calais, treasured by Englishmen as we treasure Gibraltar, was lost after it had been held for something over two centuries. Of Mary's many bitter griefs the bitterest was the loss of Calais. Ten months later she passed away, the most tragically pitiable figure among all the sovereigns who have ruled over England.

This cartoon character humourously reprsented the essence of an Englishman


The character was invented by John Arbuthnot, a political pamphleteer

He first appeared in the History of John Bull, in 1712