Elizabeth I and Scotland

Navigate 'A History of the British Nation'
<< The Accession of Elizabeth I - Elizabeth and Scotland - Mary, Queen of Scots in Scotland >> 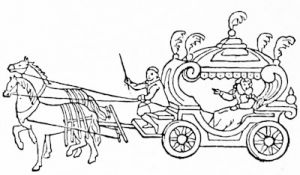 A Spanish Proposal
The first marriage proposal [to Elizabeth I] came from Philip of Spain himself. He would get a papal dispensation allowing his marriage with his deceased wife's half-sister. To his great astonishment, his offer was politely declined by the daughter of Anne Boleyn, who, if such a dispensation were valid, could not herself claim to have been born in wedlock. The disappointed suitor took another wife, a princess of France.

A curious popular superstition that he sent the Spanish Armada thirty years afterwards to punish Elizabeth for refusing him must be put away among the fairy tales of history. The matter of pressing importance to Elizabeth was to free herself from foreign complications for the moment. There was an armistice in the French war, and the treaty of Cateau Cambresis allowed England to retire with her honour saved by the French king's promise to restore Calais after eight years, supplemented by the formal recognition of Elizabeth as the lawful Queen of England; while she herself evaded the formal recognition of Mary as heir-presumptive.

New Act of Uniformity and Supremacy
The religious question was promptly dealt with. No changes were made till parliament met at the beginning of 1559. The Marian legislation was then reversed, and the new settlement took shape in the new Acts of Supremacy and Uniformity. By the former, the title of Supreme Head was dropped, but the Crown was declared to be "supreme in all causes as well ecclesiastical as civil." The refusal of the oath was not to be counted as treason, but was a bar to office.

Religious opinions were to be a ground for proceedings only when they controverted decisions of the first four General Councils of the Church Universal, or were in plain contradiction to the Scriptures. The Act also authorised the appointment of a court for dealing with ecclesiastical offences, which was actually constituted twenty-four years later as the Court of High Commission.

The new Act of Uniformity required the use of a new service-book which differed very little from that of 1552, though in some respects it reverted to the less emphatically Protestant volume of 1549. Refusal to accept the two Acts caused the deprivation of all the bishops except one, and the ejection of a small number of the lower clergy from their benefices.

The vacated sees were filled almost entirely from among the less extreme Protestants, Matthew Parker being made Archbishop of Canterbury. Critics hostile to the "doctrine of the continuity of the English Church and of the apostolic succession in its priesthood rest their case on doubts of the validity of the ordination of Bishop Barlow, who consecrated Archbishop Parker — doubts for which the evidence gives no sufficient warrant.

The principle of the settlement was approximately that at which Somerset had aimed the enforcement of a sufficient uniformity of practice and ceremonial along with the admission of very wide variations of doctrine but a definite rejection of transubstantiation. Methods of Church government and ques­tions of ceremonial, not questions of actual doctrine, were those which for the most part disturbed the peace of the comprehensive Church which was thus established.

Finances
Financial administration was also vigorously taken in hand, immediate confidence was inspired by the known probity of the financial agents selected by Cecil, by the obvious self-reliance with which the government faced its difficulties, and by its hardly expected stability. It soon became manifest that there was to be no wastage, and that every penny of the public supplies would be strictly expended on national objects under stringent supervision.

Every loan that was negotiated was repaid with an admirable punctuality; and with the restoration of public credit, the negotiation of loans became a comparatively easy matter. The financial problem was in great part solved by the skill with which the whole of the debased coinage in general circulation was called in and was replaced by a new coinage of which the real and the nominal values were the same.

Scotland
During the same period Scotland was also settling her own affairs, which were reaching a crisis at the moment of Elizabeth's accession. In the eleven years since Somerset's invasion in 1547, the French party had held the ascendency. Although the Earl of Arran, the heir-presumptive, who held also the French title of Duke of Chatelherault, was nominally regent, Mary of Lorraine was the real ruler of the country, and in 1554 she became actually regent, Chatelherault retiring.

It was in fact her policy to turn Scotland into a province of France — by no means with Scottish approval. The appointment of Frenchmen to the most responsible offices of the state intensified the general uneasiness. An attempt to establish a property tax had to be promptly abandoned, and when the regent in 1557 proposed to invade England in the interests of France, she met with an obstinate refusal from the leading nobles.

Marriage of Mary, Queen of Scots
In the following year Queen Mary was married to the Dauphin, and the Scottish com­missioners for the marriage treaty returned from France with an angry consciousness that if they had given way to the French demands, which they refused to do, Scotland would have ceased to be the ally and would have become in effect the subordinate of France.

Now hostility to France meant of necessity inclination, towards England. In the past it might at almost any time have been claimed that patriotism and hostility to England would go hand in hand; but under the existing conditions patriotism came near to involving hostility to France. Moreover, the coming of the Reformation had introduced a new factor. The Guises in France were at the head of what, in that country at least, may be called without offence the Catholic party; Mary of Lorraine in Scotland had identified herself with the Clerical party.

If Protestantism triumphed in England, Scottish Protestantism would inevitably turn to England for support, as it had done a dozen years before. Scotland would in any circumstances refuse, as she had always refused, anything that pointed to subjection to the richer country, but the idea of a union which involved no subordination was one which now might possibly be rendered accept­able to the Scottish people, even as it had seemed desirable to far-seeing statesmen in both countries.

During Mary Tudor's reign in England, the regent in Scotland had been obliged to walk warily in matters of religion, and the reformed doctrines had spread apace, several of the nobles ranging themselves upon that side; prominent among whom were the Lord James Stuart, the young queen's illegitimate half-brother, and the Earls of Argyle and Morton, to whom was shortly to be added the Earl of Arran, a title which was now borne by the son of the Duke of Chatelherault.

Before the end of May 1559 it was already certain that there would be an armed struggle in Scotland. In July Henry II of France was killed in a tournament; his son Francis II and Mary Stuart became king and queen. Both in France and Scotland the Guise interest was predominant; and the Lords of the Congregation opened communications with England, while French troops were landed in Scotland to support the regent.

It was at this stage that Elizabeth got fairly started on her matrimonial diplomacy. Philip of Spain now wished her to marry his cousin the Austrian Archduke Charles. The Scots proposed that she should marry the young Earl of Arran, whose prospective claim to the Scottish throne might be made an immediate one by the deposition of Mary Stuart. Elizabeth played with both offers, though she had no intention of accept­ing either. It was her favourite method to avoid committing herself to anybody. But in the next year, under persistent pressure from Cecil, she did commit herself to supporting the Lords of the Congregation; not, in theory, against the queen, but against the regent who was abusing the royal authority.

The French withdraw from Scotland
Elizabeth was already able to send an efficient fleet to sea, and the arrival of an English squadron in the Forth cut off all prospect of French reinforcement for the regent. This was followed up by tie despatch of an army to help the Lords of the Congregation. The regent was shut up in Leith, which was vigorously defended; but in June she died, and with her death the position of the French troops in Scotland became practically untenable. An arrangement was entered upon variously known as the Treaty of Edinburgh or of Leith. The French were to evacuate Scotland, having given a pledge that the demand of the Lords of the Congregation for religious toleration should be recognised, as well as Elizabeth's own right to the throne of England.

Virtually the triumph of the Lords of the Congregation was secured with the death of the regent and the disappearance of the French troops. It was certain that after this any serious attempt to bring back the French would be impracticable. Mary might, and did, refuse to ratify the treaty, but the fact of the evacuation was decisive.

Before the end of the year, the death of Mary's husband changed the whole situation. She was no longer Queen of France. The queen-mother, Catherine de Medicis, meant to secure her own ascendency over the new King Charles IX, and France had no longer the same interest as before in the possibility of Mary's accession to the English throne. The presumption remained that such an event would bring England into close alliance with France, but nothing more.

Queen Mary returns
There was a possibility that Philip might attach Mary to himself, though unless he could succeed in doing so it would still be emphatically opposed to his interests to see Mary on the English throne. Elizabeth could for the present remain free from the fear of Spanish intervention on Mary's behalf, and would rather make it her aim to attach Mary to England. The Scots of both parties saw possibilities of advantage for themselves in the return of the young queen to her native country. In August 1561 Mary left the land in which she had been bred and reached the bleak shores of her own northern kingdom.

<< The Accession of Elizabeth I - Elizabeth and Scotland - Mary, Queen of Scots in Scotland >>