Navigate 'A History of the British Nation'
<< The Witan, or Anglo-Saxon council - Anglo-Saxon Clan System - The Anglo-Saxon Legal System >> 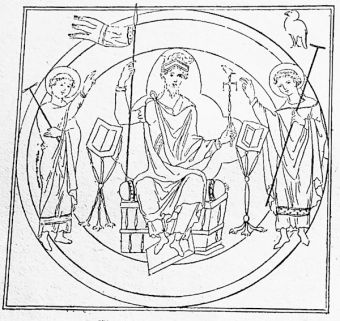 The king upon his throne, from an 11th century book of prayers

Kinship
Now the primitive organisation was definitely tribal, resting on kinship, having as its basis the family, rising to the group of families forming the clan, the group of clans forming the tribe, and the group of tribes forming what for want of a better term we must call 'the nation'.

Where a tribe migrated bodily the tribal system would remain in full force. When it took possession of its new territory it occupied the soil in groups of households who were all closely akin to each other; and the aristocracy - those, that is, who enjoyed a general prestige, formed the inner council, and provided the war-lords were the chief families of the clans, the families which were regarded as most directly representing the real or hypothetical common ancestor. But migration was not necessarily a tribal act.

It might be merely the movement of a restless group of adventurers who, as volunteers, joined the standard of a leader bent on roving exploits. In such cases the tribal or clan system would break down, and kinship would be only the occasional, not the invariable, basis of the settlements of the conquered country; while prestige would attach not to the hereditary clan chiefs, but to the warriors who achieved distinction and who were admitted to the personal companionship of the war-lord, his "comrades" (gesiths) and "servants" (thegns).

Consequently on the new soil it would be natural to find both principles at work, and that expectation seems to be in full accordance with the state of things which emerges when the conquest is completed.

Place names repeatedly mark obvious groups of kinsfolk, family names, as in practically all cases such as Billington, Wellington, and the like, where the suffix 'ing' is to be found; but in other places the ham, tun, or wick has a personal name which rather implies that the settlement was not that of a family group. And in like manner the local magnates, though occasionally claiming high descent, had generally lost the character of clan-chiefs.

The clan-chiefs had been displaced by the king's thegns, the men whom the war-lord had honoured, or their descendants. The ealdorman appointed by the king to represent him in the provinces as his territory expanded was no longer an ealdorman in right of his position in the clan but in right of appointment as a minister of the state; and his position was not hereditary, though there was an inevitable tendency to the retention of the office in the same family whenever it was capable of providing a competent successor.

Shires
As kingdoms grew they were parcelled out into districts which, in Wessex, were called shires, each under the king's representative; the ealdorman, and the king's shire-reeve or bailiff, who was primarily concerned with the king's financial business.

There is good ground for holding that the Wessex shires corresponded to the minor principalities which were absorbed by the king of Wessex. The ealdorman was a sort of lieutenant-governor and commander of the military forces of the shire, while the reeve was the king's financial agent and at the same time a sort of vice-lieutenant-governor. At a later stage, when the ealdorman became the earl and in Latin the comes, the sheriff was in Latin the vice-comes.

King and council
State policy, war, peace, and legislation belonged to the king and the council. Legislation, however, was not, as in modern tines, a matter habitually engaging the central government The law meant established customs/conditions, and conventions. Conditions changed slowly and legislation meant merely the adaptation of customs to changed condition; therefore it was very rarely required.

When Christianity was introduced AEthelbert of Kent had to modify the existing code so that it might square with Christian ideas. Again variations of custom were introduced locally, so that from time to time it became necessary to codify customs and impose a degree of uniformity.

Law codes
Hence come the codes or "dooms" of successive kings; and when such codes were issued the kings took the opportunity of introducing such modifications of their own as were likely to be generally approved. Such almost exclusively was the character of legislation under the Saxon kings.