The Witan, or Anglo-Saxon council 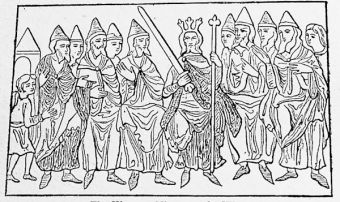 The king presiding over the Witan, from an 11th century MS. illumination

The constitution of the King's Council or Witan is much debated, as also are its powers. It is quite clear that the Witan, whatever its constitution, did control the succession and choose the new ruler on the demise of the king. It is also clear that whenever a king promulgated laws the code was prefaced by statement that it was issued after consultation with and approval of the Witan.

Who took part?
We may be confident that no king would venture to introduce marked innovations without first securing the acquiescence of that body. The Witan, which was thus formally consulted, seems generally to have consisted of the bishops and ealdormen ex officio, and some other nominated members.

Choosing a king
On the other hand, when the Witan assembled to make choice of a king it would appear that the freemen at large were entitled to put in an appearance and take their share in the proceedings. In fact it looks as if the king under ordinary circumstances acted on his own responsibility, but in questionable matters disarmed possible opposition by faking the council, so to speak, into partnership and securing the agreement of the magnates of the realm; while the magnates, when the king died, in their turn took the freemen into partnership by admitting; them to ratify the choice of the new monarch.

On these occasions the Witan stands as a survival of the ancient assembly of the tribe in arms; though, as a matter of fact, it had degenerated into an assembly of the magnates and the free population in the neighbourhood where the assembly was held.

In all this we can see an absolutely plain evolution from the ancient tribal system as depicted by Tacitus. When joint action was undertaken by the tribes, the war-lord was chosen by the tribal assembly; and the elected war-lord developed by degrees into the hereditary monarch.

The war-lord had his council of the heads of the clans or great family groups within the tribe, who, in the later stage, were displaced by the ealdormen, who were the heads not of clans but of districts, as clan organisation yielded to district organisation; and the organisation of the Church involved the admission of the ecclesiastical heads to this group.

It was entirely undesirable that the freemen should be expected or indeed should be willing to gather from all parts of the country to attend such an assembly; so for ordinary purposes the national assembly ceased to exist, because no one except the magnates would take the trouble to attend it, and it survived only in a very mutilated form for royal elections and not much besides.

Margaret was the eldest daughter of Henry VII