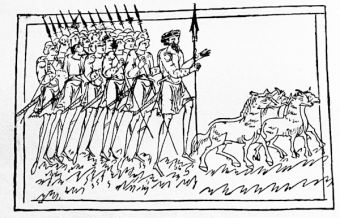 The king and his thegns, from a ms in the Bodleian Library, Oxford

Apart from high policy and legislation the business of government lay with the local authority, and the local authority was the local assembly of freemen. The local unit was the tun or township, the village, the group of households whose members occupied the surrounding land, and settled such of their affairs - as required settlement in the town's meeting.

Administering justice
Justice was administered in these "folk-moots" or popular meetings, each under the presidency of its reeve - town-reeve, hundred-reeve, or shire-reeve. Primarily it appears that the whole body were judges.

At a later stage, when the number of households in the hundred had very much in­creased, a kind of representation took the place of the general assembly of all freemen. The principal landholders were expected to attend, and from each township the parish priest, the reeve, and the four "best men," as well as those who were personally concerned in any questions arising.

Judges and reeves
Further, it seems to have become customary for a sort of committee of twelve to act as judges in place of the whole body; and probably it is to this custom, already established by the time of Alfred, that we must attribute the tradition that Alfred himself invented Trial by Jury.

On the other hand, it is also likely, though not certain, that the prestige attaching to the person of the reeve of the court gave him a practical authority, which gradually made him in effect a superior magistrate; and that out of the jurisdiction thus acquired by him grew the jurisdiction of the lord of the manor.

Weregild fines
The "dooms" of the kings are mainly concerned with crimes of violence, or at least injury to person or property. The penalty was habitually in the form of a fine - the weregild payable as compensation to the injured person or his relations by the wrong-doer or his kinsmen, and the wife payable to the crown.

By the end of the ninth century the amount of the fine was assessed precisely according to the rank or the injured person, and there was an elaborate scale of payments according to the injury. Thus the ordinary free ceorl got more compensation for the loss of ail eye than for an injury to his hand; but the thegn got bigger compensation than the ceorl for a like injury.

,p>As a general principle the wrong-doer was personally responsible for paying a proportion of the hue, and his kinsmen. were responsible (or seeing that the balance was paid, the Saxon system, as already noted, being primarily based on the idea of kinship.

The whole system of the weregild appears to have been invented in order to get rid of the old system of the blood feud. When, under primitive conditions, one member of a kinship, called a maegth, was injured, the whole family took the matter up and avenged it on the maegth to which the injurer belonged, and so retaliation was endless.

The point of the weregild was that, when the fine had been paid, the feud was ended and further retaliation was not regarded as justifiable, but became, as it were, a breach of the king's peace.

Here, again, what Alfred and his successors did was to systematise the conflicting practices which had grown up in different parts of their realm.

Character of the accused
There is perhaps nothing in which our modern ideas stand in more marked contrast to those of early times than the administration of justice. For us the point of first importance is that no man shall suffer if there is any reasonable shadow of a doubt of his guilt.

In the medieval view it was more important that the crime should somehow be punished than that the innocent should escape; hence the doctrines of common local or family responsibility.

But still more curious is the change in the conception of evidence; our insistence on positive proof is so marked that merely circumstantial evidence has to be extraordinarily strong before it is allowed to carry weight. But apart from cases where the criminal was taken practically red-handed, the evidence which satisfied our forefathers was hard swearing not so much to facts as to character.

Proof by ordeal
The accused, when the evidence as to facts was not obviously conclusive, was held guilty unless he could support his own oath of innocence by producing substantial "witnesses" to his character; and the value of their oaths was assessed according to their social position.

The final appeal of the accused was to the justice of Heaven, the 'ordeal' which found its later counterpart among the Normans in the Wager of Battle on the hypothesis that God would defend the right and give victory to the innocent. For anything like our modern sifting of evidence there was no machinery whatever.