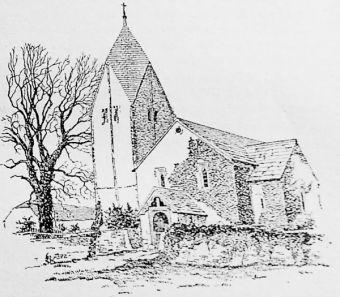 The whole system of land settlement and land tenure is a matter of much controversy. The primary type of settlement with which we must start is that of the group of households planted together and forming a ton or township. To the township was allotted a sufficient area of land, of which only a part was at once taken up for cultivation and meadow land, while the remainder was waste land and common property.

The land brought under cultivation was allotted to the different households in strips of an acre or half an acre, each household originally receiving altogether a hide of a hundred and twenty acres; that is usually one hundred and twenty strips, for the half acre was probably a later subdivision.

But the strips of each household were not contiguous. Supposing there were ten households, each household had one strip in each group of ten strips, the strips being separated merely by balks or ridges. They were worked in common by the labour and the plough-teams of the whole community, though each household took the produce of its own strips. This is what is called the Open Field System.

Open Field System
As far as this system is concerned, the expansion of the population would find its needs met partly by taking in more of the waste land and partly by the planting of new settlements, since for some centuries there was much more land available than could be brought under the plough.

But individuals were also allotted more than a single equal share - more than the individual household could work. In the later stages the possession of five hides of land entitled a man to claim rank as a thegn.

Moreover, whole estates were allotted to the king, which he, in his turn, could bestow upon others, or could apply to ecclesiastical endowment.

How were these larger estates worked, unless a large subject population had been preserved which was set to labour upon them in a more or less servile character? The difficulty of believing that any large proportion of Britons was thus preserved, except on the Welsh marches, has already been dwelt upon; although there is strong reason for supposing that the class in Kent called laets did fall under this category.

The riddle in fact is not solved. But it seems reasonable to suppose that where a large estate was granted there would be many members of large households who would be willing to. become in a way tenants of the great landholder in preference to accumulating upon their own household "hide".

The thegn, therefore, would plant his estate with workers, dividing it up among them in the same way as in the free-land community; but reserving to himself a share of the strips, the occupiers of the rest holding their strips on condition of cultivating his strips for him.

Whether or no this be on the whole a correct account of the course of development, what we do find in the later times is that in most villages, though not in all, the villagers were bound, according to the size of their holdings, to render a fixed amount of service in cultivating the lands of the lord, the. tenure of their own holdings being conditional only on the rendering of this service.

The enormous majority of these occupiers of the soil did not forfeit their political freedom and their political rights merely because they held their land on condition of service; and they remained in their own eyes and in those of every one else free ceorls.

The expansion of households and the movements of population also led to the subdivision of the original hide, so that by the eleventh century at least the ceorls normal holding -was thirty acres.

It must be added that there was also an actually servile population - to be accounted for partly by slaves originally brought with them by the invaders, partly by descent from the Briton women who were spared, and partly by captives taken in early wars between the English themselves and be­tween English and Britons. Actual slaves, however, never formed more than a small proportion of the population.