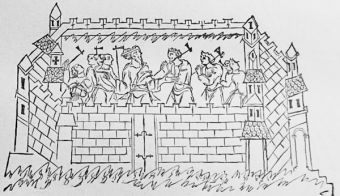 The old English burh, or fortified place, from a MS in the Bodleian Library

Three levels of status
Broadly speaking, then, we have these divisions; thegns and great landowners who held estates which were partly demesne lands - that is, reserved to themselves - and were partly occupied by tenants who had to cultivate the demesne land and also, as a rule, to make some sort of payment in kind; fowls or pigs or grain. Next there were the free ceorls who had no great estates, but occupied their holdings under the original free tenure, owing service to no man.

Next there were the free ceorls who occupied their holdings on condition of service to the lord; holdings which might be anything from five acres or even less up to one hundred and twenty, but were most commonly either thirty or fifteen acres.

nd last there were the theows or the serfs who, if they had a plot of land at all, held it merely by grace of their owner. Land which any one had acquired by grant or written agreement was known as hoc-land; while land which was held simply by customary tenure was known as folc-land.

Self sufficiency
The village aimed at being self-sufficing - at producing for itself all that its inhabitants required. Commerce consisted practically in the exchange of superfluities for goods of which there happened to be a deficiency.

Each village supplied its own necessary artisans - the smith, the thatcher, or the carpenter - who was paid primarily not for the job, but for doing whatever turned up to be done in the village, by having a holding allotted to him, or being freed from his share in the common work of tillage, a system which gradually gave way to payment by the job.

Commerce
Payment was ordinarily made in kind, since there was very little money available, just as commerce was conducted by barter, not by money payments. In the same way when the lord wanted extra work done which was not in the bargain he made payments in kind to the workmen, which were only beginning to be to a small extent replaced by payments in cash in the eleventh century.

Towns in the modern sense, large aggregates of populations mainly taken up with the business of making and exchanging goods, had hardly come into existence, though there were a few places like London which formed exceptions to the rule.

Settlement patterns
Here and there where traffic accumulated, as at bridges and fords, cross roads and shrines to which pilgrims congregated, there were larger communities; and when in the days of Alfred and his sons fortified points were established either for strategic reasons or for the protection of places which had already acquired some importance, there the population tended to increase, attracted by the greater security.

Hence the borough of later days got its name from having been at first a burh or fortified place. But the population, even of the borough was mainly occupied with agriculture; and in the days of the English conquest the mere idea of a town was so foreign to English conceptions that practically all the towns which had grown up during the Roman occupation were not preserved by the conquerors, but were destroyed and not rebuilt.

The fyrd
The English had the character of sea-rovers like the Northmen after them, when they first invaded Britain. But they ceased to pay attention to the sea. Not being in any sense commercially minded, they sought no intercourse with the peoples across the channel; and they only began to be seamen again when King Alfred perceived that a strong navy provides the most effective defence for an island. In fact, until the Danish incursions, the idea of national defence hardly presented itself. When a king went to war with his neighbour he called the freemen in general to arms, all freemen being liable to serve in the fyrd; the fyrd being summoned by shires which, probably in Wessex where the system arose, originally corresponded to sub-kingdoms.

When the fyrd was summoned, the ceorl put on his armour and marched to the field with his sword on his thigh, and probably with his scythe fixed endwise on a pole. Hence the bill of later days was merely an adaptation of the scythe transformed into a spear.

When the fighting was over he went home and turned his bill into a scythe again. And he always objected to being summoned anywhere outside his own shire. Alfred reorganised the fyrd, so that only a portion of the freemen were summoned at one time, and the ordinary agricultural operations could still be carried on while the force was in the field.

Saxon - and Dane alike fought on foot, but the Danes taught the English the advantage of preparing entrenched and palisaded positions. In 871, the "year of battles," the Danes saved themselves from destruction by falling back to their entrenchments when defeated in the field, and against their palisades the Saxon hurled himself in vain.

Cavalry and infantry
The Danes were also made formidable through their appreciation of the usefulness of rapid movement. They made it their first business on landing to sweep in every horse they could lay hands on. But they used horses for transit not for fighting; possibly for pursuit and flight, but not for charging in the field. The incapacity of the English in general for grasping the uses of cavalry were largely responsible for the overthrow at Hastings.

They had no cavalry, and the only way to pursue a flying foe was to break their own line and rush forward from behind their shield-wall or palisade; authorities are not in agreement as to whether their position at Hastings was actually palisaded. William the Norman finally won the day by anticipating the methods of Edward I in attacking an infantry which proved impenetrable to unaided cavalry charges.

He combined artillery with cavalry, and his bowmen made breaches in the enemy's ranks into which his horsemen could penetrate. But the might of the bow was only perfected after more than two centuries, and even then the English, and the English alone, possessed it in perfection.

At Hastings the Norman used only the short bow, an instrument infinitely less powerful than the later long-bow, though it served its purpose against troops which had no cavalry to drive the archers out of range, and no archers of their own. For two hundred years after Hastings no foot-soldiery seem again to have stood against the charge of mailclad horsemen.

Literature
Of the early English literature little needs to be said, for little enough has been preserved. Early writers wrote for the most part in Latin; in the vernacular there is practically nothing before Alfred except the ancient song of Beowulf, which dates from pagan times, and the poem of Caedmon, written about 670, based upon the Book of Genesis.

The Anglo-Saxon Chronicle
Under Alfred's direction began the compilation of the Anglo-Saxon Chronicle, a work of much historical value, which has also the credit of preserving the fine layer of the battle of Brunanburh, of which some lines have been quoted. Alfred also deserves gratitude for translating and editing standard historical and philosophical works of his own time.

But the great king's own high ideals of education scarcely took any very deep root; and perhaps the early eighth century, when Bede flourished at Jarrow, was the only time at which the English stood in the front rank of their contemporaries as a nation among whom culture and learning flourished.

Margaret was the eldest daughter of Henry VII

This king led his troops at the Battle of Dettingen in 1743, the last English king to lead his men in battle


His father was George I

He was followed to the throne by George III