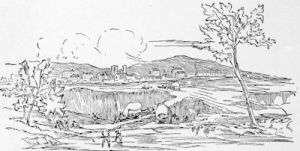 Gold-seekers at Bathurst, Western Australia, on their way to the fields at Ophir, 1851, from a print published at Sidney, N.S.W. in 1851

Australia
Turning now to the most remote quarter of the globe, we find the Australasian colonies steadily expanding. The year 1834 saw the beginnings of the colony which afterwards was named Victoria, and its capital, Melbourne, was founded in 1837. As yet it was an offshoot at New South Wales and was administered by. officials under the New South Wales government. South Australia was colonised from England in 1834; its capital, Adelaide, took its name from William's queen. In 1839 New Zealand was annexed, completing the list of the Australasian colonies, since the settlement of Queensland and of Western Australia had been commenced in the previous decade.

The convict settlements with which the colonisation had originated had now become a serious drawback. In the settlements begun later than 1829 there were no convicts; and transportation to New South Wales ceased in 1840, to Queensland in 1849, and to Tasmania in 1853. The Canadian troubles in fact awakened the British Government to the wisdom of giving the great Australasian settlements the status of free self-governing colonies. It was not that the modern imperial conception had taken hold of men's minds; the idea was rather that the principle of self-government ought to be applied to all British communities which were sufficiently advanced to admit of it. Free self-government was incompatible with the use of the colonies as convict settlements; hence the gradual abolition of the system.

Australian state self-government
Hitherto every colony in Australia had been controlled by a governor with a small nominated council, the council being primarily merely consultative, though by degrees the arbitrary powers of the governor became limited. In the year 1842 came the beginnings of representation in New South Wales. The legislative council was enlarged, and two-thirds of the members were elected. The movement towards self-government was not at first rapid, but a great change came over the character of the Australian population with the discovery of gold-fields, which brought in a rush of immigrants. In 1834 the four most highly organised of the colonies were given responsible government in full measure, their several constitutions varying in accordance with the wishes they had severally expressed. In every case one chamber was wholly elective, though the composition of the second chambers differed. Each colony had its governor, but in each the executive was responsible to the legislature. Thenceforth they, like Canada, were virtually independent states except as concerned relations with foreign Powers.

New Zealand
The story of New Zealand requires separate attention. The Maoris, the native population of those islands, were an advanced race infinitely superior to the "black-fellows" of Australia and Tasmania both physically and intellectually. The annexation of New Zealand was carried out after the Treaty of Waitangi, an agreement made with the native chiefs. The relations between the Maoris and the British settlers occupy a much more prominent position than corresponding questions in Australia. There the natives were primitive nomads, without anything which could be called organisation.

The Maori
The Maori, on the other hand, lived in a community which had quite definite conceptions with regard to law and to property; he was no doubt a barbarian, but he had a definite civilisation of his own. When the Maori chiefs made their bargain they knew what the bargain meant, and they ex­pected the white man to keep it. They were to be under the protection of the Queen of England. The land was to remain, as it was at the time, Specifically the property of the tribes. Only the tribe could alienate it; no individual chief or other person had power to do so. And if a tribe was willing to part with or sell any of its land, the only recognised legal purchaser, the only person who could acquire possession from the tribe, was to be the governor, representing the queen..Only from the governor could the individual white man obtain land in New Zealand. In Australia, on the contrary, no one had ever dreamed of regarding an inch of the soil as the property of any individual native or group of natives.

The Treaty of Waitangi
Unfortunately, would-be settlers ignored the treaty, under the mistaken impression that they had to deal with merely ignorant savages. They bought land for themselves which they had no right to do, from chiefs who had no power to sell it. The Maoris protested and backed their protests by force. Only the interference of the then acting governor, who recognised the essential justice of the Maori position, prevented the 'white men from being driven into the sea. The situation, however, remained extremely dangerous until the arrival, in 1845, of one of the greatest of all British colonial administrators, George Grey, who had already proved his capacity as governor of South Australia.

Grey resolutely insisted on the terms of the Treaty of Waitangi, suppressed the acquisition of land by irregular means, won the confidence of the Maori chiefs, and brought them to aid him in suppressing those who continued recalcitrant, when they saw that he had established control over his own countrymen. The completeness of his self-reliance was again demonstrated and justified when the home authorities supplied New Zealand with an unsatisfactory constitution. Grey refused to put it in force until his own views had been taken into consideration. So effec­tive was his protest that the constitution was withdrawn; and ultimately in 1852 his own scheme was practically accepted establishing responsible government analogous to that which was already in force in Canada, and was set up two years later in the four leading colonies of Australia.

The Queen's Theatre in Haymarket was the venue for Handel's 'Rinaldo'