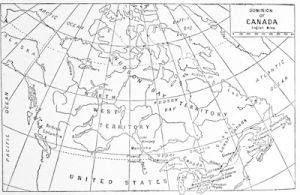 Map of the Dominion of Canada
The early years of Queen Victoria's reign form a very definite epoch in the history of British colonial development. In effect during those years the more important colonies all acquired an advanced degree of autonomy. Some of them in 1833 were possessed of legislative assemblies, but even in the most advanced of them those assemblies were in part nominated, and in every case the executive government was responsible to the governor and to the Crown, not to the legislature. That is to say, the administrative offices were all held at the Crown's nomination and did not change hands with the changes of party predominance in the Chambers. The situation, in fact, was very much like that in England before the system of party government came into full play. In the course of the next, twenty years all the leading colonies had acquired elective legislative assemblies, and in nearly all of them ministries were practically constructed in accordances with the party majority in the legislature. The change began with Canada, where discontent was already becoming rife before the Reform Bill was passed in England. Both in Upper and in Lower Canada the cause of discontent lay largely in the fact that the administrative offices had become the virtual monopoly of a few families. In Lower Canada the trouble was intensified because these predominant families were British, whereas the mass of the population was of French blood, French in its ideas, traditions, and language. The development of the great republic on the south fostered advanced political ideas. Both in Upper and Lower Canada the elected legislative assembly raised an insistent demand for increased control over administration, and claimed that the Second Chamber also should be an elected instead of a nominated body, a change which in Lower Canada would have ensured an overwhelming French preponderance.

Papineau's Rebellion
In 1837 the troubles culminated in an armed revolt in Lower Canada known as Papineau's Rebellion, from the politician who was its recognised leader. Even advanced Canadian opinion did not m fact approve of such extreme action; the revolt was suppressed with­out difficulty, and a corresponding attempt at insurrection in the Upper Province scarcely made head at all. The home government adopted an unprecedented course. It suspended the constitution of the Canadas, and despatched a commission, invested with the supreme control, to investigate the whole question of Canadian discontent, and to conduct the. government pending the results of the enquiry.

Lord Durham
The Governor-in-Chief and High Commissioner was Lord Durham; but at the instance of the Opposition restrictions were placed upon the absolute powers with which it was originally intended to invest him. He was a man of strong and independent personality, very self-confident and somewhat arrogant, a difficult colleague who made many enemies, holding-views which in England were regarded as dangerously advanced, but endowed with keen penetration. On his arrival in Canada he was faced with the difficulty of dealing with the political prisoners. In existing circumstances it would have been impossible that their trial in the ordinary course should have satisfactory results. Therefore, on his own responsibility he issued an ordinance banishing those of the rebels who had fled over the frontier, while those who were in his hands were deported to the Bermudas.

Members of both groups were forbidden to return to Canada upon pain of death until permission should be granted. With the way thus cleared he proceeded, with the aid of his council, to investigate the whole situation and to prepare a report upon it for the home government. In his banishment ordinance however he had exceeded his powers; a hot attack was opened upon him in England; and the Melbourne Government, with a small and precarious majority in the Commons and a hostile majority in the Lords, gave way. Lord Durham was recalled, and the governorship was placed in the hands of Sir John Colborne. Durham, on his departure, issued a very injudicious proclamation, which was virtually an attack upon the Government which had deserted him. Canadian opinion was strongly on the side of the man whose sympathetic grasp of the situation in Canada. had been made evident; nevertheless Durham had ruined his own career, and died shortly afterwards.

Canadian Act of Reunion
Colborne conducted the administration with ability and firmness. A fresh attempt at insurrection was promptly suppressed, and raids from the United States were sharply dealt with. Durham had sealed his own political fate, but he had done his work for Canada. A bill providing a new constitution for the colony was introduced and passed in 1840, and this Canadian Act of Reunion adopted his report almost in its entirety. He had seen that the prime necessity was the establishment of a national Canadian sentiment in the place of the existing local and racial sentiment. The two Canadas were united under a single legislature, and endowed with practically complete powers qf self-government, while local government was put in the hands of local elective bodies. The Second Chamber, though enlarged, still consisted of nominees, and the executive government was still in form responsible to the Crown and not to the legislature. Nevertheless, before long the powers of the legislature predominated, and except in matters of imperial concern Canada had in a few years become a completely self-governing state with "responsible" government. The same course was followed in the maritime provinces of New Brunswick and Nova Scotia.

Jamaica
In Jamaica also at the beginning of the queen's reign serious difficulties arose mainly as a consequence of the Act for the Emancipation of Slaves. The arrangement establishing the system of what was called apprenticeship for a term of years, in order to allow a gradual adjustment to the con­ditions of complete emancipation, carried with it serious temporary evils for the slave-owner, whose slaves were valuable property, had a direct inducement to take some care of the lives and health of his chattels, but there was no such inducement in the case of "apprentices" who were not marketable property. The planter class who monopolised political power were induced by pressure from England reluctantly to proceed to immediate emancipation; but the consequence was immediate and violent friction between them and the newly emancipated blacks.

The result again was that the Melbourne ministry proposed to suspend the Jamaica constitution for five years. The opposition encountered led to Melbourne's resignation and the temporary interregnum marked by the bedchamber incident. When Melbourne returned to office, a new Jamaica Bill left the assembly the opportunity of avoiding a suspension of the constitution, and by the judicious management of Lord Metcalfe, who was sent out as governor, the crisis was tided over.
<< The Irish Potato Famine - British Government in 19th century Canada - British Colonial Government in Australia and New Zealand >>