The Beginning of the English Reformation 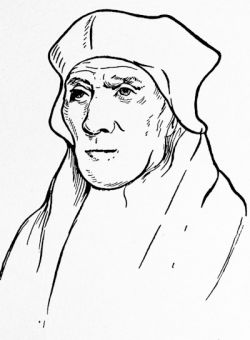 John Fisher, Bishop of Rochester, after the drawing by Holbein

What was the Reformation?
The Reformation in one of its aspects was a part of that intellectual movement which is covered by such terms as the Renaissance or the Revival of Learning; terms which refer primarily to the revolt of the human intelligence against bondage to the ex-cathedra dicta of authority in every field.

That revolt involved the right of the individual to inquire, to criticise, to judge, and to form conclusions, or at least to choose the authority to whose judgment he will submit himself. In another aspect it was a spiritual revolt against the interposition of any meditating agency between the individual human soul and its Maker. In a third aspect it was a moral revolt against the corruption which was born of the abuse of practices not in their original nature demoralising.

In a fourth aspect it was merely another chapter in the world-long struggle between Secularism and Clericalism, between an organisation claiming authority in virtue of its guardianship' of the arcana of Divine knowledge, the hidden wisdom of the Almighty, and the frankly human organliatlon of the State; and in this contest the State was the aggressor, and reclaimed for itself much which it declared the Church to have acquired upon false pretences. But in all its aspects it displays one common characteristic, the rejection of the authority of the Holy See.

A great and far-reaching reformation or reconstruction was possible and actually took place within the Church, which continued to acknowledge the papal authority; but "the Reformation" in the technical sense means the schism between the Church which still clung to Rome and the diverse Churches and sects which separated themselves from her. The Reformation for which the government of Henry VIII was responsible had very little to do with any of the first three aspects; it was with the fourth that the State concerned itself; but it was with the other three that the national life was most vitally concerned.

Although the Reformation in the technical sense of the term implies the rejection of the Roman obedience, the movement which culminated in the Re­formation had no such object in view. Even the theological speculations of Wiclif and Huss, which had prepared the way, were not consciously directed against the papacy.

Emperors, kings, and princes, who fought against popes with the weapons of the flesh, did not, until the eleventh hour, challenge the spiritual supremacy of the Roman pontiff. They habitually looked upon themselves as faithful sons of the Church, and Henry VIII himself obtained from Pope Leo X the complimentary title of Defender of the Faith.

Erasmus
The man who probably did most to undermine the papal authority, the supreme representative of the critical spirit, the man of whom it was said that "he laid the egg which Luther hatched," Erasmus, remained to the last attached to the principle of papal authority. The men who in England fought hardest to reinstate the papal authority, after it was overthrown, had been brought up in the new school; and in the early stages of their careers they had been looked upon as advanced reformers. The first reformers believed that reform could come from within, and that purification of doctrine and practice could be attained without shattering the organisation which had hitherto seemed inseparable from Christianity itself.

Pope Alexander VI
Moral standards in the fifteenth century were low, and the Church did nothing to raise them. After the Great Schism had been brought to an end, the papacy itself had recovered some of its prestige; but at the close of the century it again sank to pitiable degradation, reaching its nadir when the Borgia Alexander VI was elevated to the papal throne. No vice was too foul and no crime too black for the man whom Christendom acknowledged as the successor of St. Peter.

Nor was the spirit of religion fostered by his successors, the militant politician Julius II or the refined pagan Leo X. When the head is corrupt, the limbs are not likely to be healthy. We have no need to turn to the partisan diatribes of anti-clerical fanaticism, or to the inevitable exaggerations of Protestants in the hour of their persecution or of their victory, to realise that the Church was in desperate need of reform.

The higher ecclesiastics, often against their will, were forced into politics and drawn away from their religious duties. Laxity of discipline was prevalent in most monastic establishments, and rank immorality in some of them. The lower clergy were uneducated, and their teaching was commonly a wretched travesty of Church doctrine.

Gross superstitions fostered by fraudulent conjuring tricks were the vulgar substitutes for religion. The redeeming fact was that the best of the clergy and the best of the laity were alive to the evil, and before the close of the fifteenth century were applying themselves to its remedy. The paralysing grip of moribund conventions was being challenged on all sides, and the general intellectual movements had received a great impulse from the revelation of the forgotten literature of Greece consequent upon the dispersion of Greek scholarship after the fall of Constantinople.

In England, characteristically enough, the light of the new Greek scholarship was turned first upon the New Testament, and the intelligent criticism of Colet and Erasmus began to vitalise a still orthodox interpretation of the Scriptures. A vigorous educational reform was fostered by the greatest of the Church dignitaries Warham, the successor of Morton, Bishop Fox, and Bishop Fisher and not least by Wolsey himself, the brilliant "boy bachelor," with whom indeed education was a passion.

They founded schools and colleges, and set in them teachers who were enthusiasts of the New Learning; and they believed that education was a panacea for all the evils from which the Church was suffering, which would complete a cure without impairing her authority, changing her doctrines, or altering her organisation. The purification was to be wrought by sweet reasonableness.

But elsewhere the study of the Scriptures was generating very different ideas. Zwingli at Zurich.was finding biblical warrant for doctrines akin to the heresies of Wiclif and Huss, and in the university at Wittenberg, in Saxony, arose Martin Luther, bringing not peace, but a sword.