The Duke of Buckingham and Sir Francis Bacon 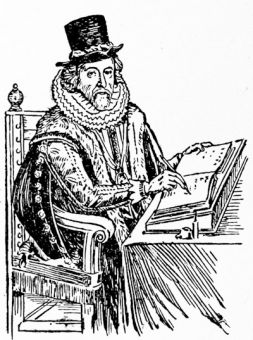 Buckingham
George Villiers, famous as the Duke of Buckingham, won the affection first of the king and then of his son Charles by his personal beauty and charm. Fearless, confident, and entirely self-centred, he never dreamed of doubting his own supreme capacity as a statesman and as a soldier; though politics in his eyes meant the punishment of people who had offended him, and he realised no difference between the art of the strategist and that of the duellist.

But the country had not yet realised that Buckingham was the king's evil genius. It did realise that corruption was rampant. It fastened upon monopolies as the great means of corruption, and the Commons attacked them so fiercely that Buckingham made a virtue of resigning those which he held himself, and inducing the king to bow to the storm and abolish them.

Sir Francis Bacon
But the attack went further. If corruption was to be effectively dealt with, the highest game should be aimed at. Francis Bacon, Lord St. Alban, was the Lord Chancellor, the head of the judicial administration, and the Commons were angrily confident that the whole judicial administration was corrupt. According to the exceedingly pernicious practice of the time, every judge was in the habit of accepting gifts from the suitors on both sides. The obvious inference was that their decisions were likely to be influenced by the relative value of the gifts.

In the same way, it may be remarked, all through the Tudor period, English statesmen and persons of influence, from Wolsey down, were in the habit of receiving gifts and honours from European potentates; and although the thing was done openly, and implied nothing in the nature of a bargain, there was an obvious danger that the system would be utilised for purposes of corruption. Bacon then was made the scapegoat of the system by the House of Commons. The Lord Chancellor was impeached and condemned, although there was no evidence that he had ever allowed his decisions to be affected by the presents which he received.

There is no ground whatever for supposing that he was a corrupt judge; but be lent him­self to a system which tended to corruption and maladministration of justice, although he recognised himself that a high standard of duty would have required him to set his face against it. He admitted the justice of his own punishment, while claiming that he had himself been the most just of judges since his father's time. His fall has brought unmerited obloquy upon his name, but it greatly served the cause of justice generally. Its effect may be measured by the fact that since his day no judge has ever laid himself open to the charge of receiving bribes.

Bacon's impeachment revived a practice which had fallen into complete abeyance ever since the beginning of the War of the Roses. From the impeachment of Lord Latimer, in 1376, to the impeachment of Suffolk, in 1450, the Commons had employed this method of attacking ministers, because the Commons were pressing their own right to control administration. The revival of impeachment meant that the Commons were once more imbued with a determination to enforce that right; and the practice was actively continued until the right itself had become thoroughly established in the eighteenth century.

When parliament was prorogued in the summer, it was still hoped that the negotiations would be sufficiently fortified by the proceedings in the House to make actual war unnecessary. But matters went so badly for Frederick that the prospect of persuading his enemies to come to terms vanished; and at the end of the year parliament was again summoned in a hurry to vote supplies. But James was still devoted to his scheme of detaching Spain and inducing her to join England in bringing pressure to bear on the Emperor and his supporters.

The Commons detested the idea of the Spanish marriage, had no belief in the possibility of detaching Spain, and were extremely averse from flinging themselves into the war on German soil instead of devoting the country's energies to a maritime attack on the traditional enemy.

In their view it was England's business to stand forth uncompromisingly as the leader of the Protestant Powers in resistance to the Catholic attack. The Commons told the king their mind, and James wrathfully told them in return to attend to the business for which they had been summoned, instead of expressing opinions upon matters which were too high for them. They replied that they were entitled to discuss what­soever matters they thought fit. James with his own hands tore the record of their resolution out of the journals of the House, and dissolved the parliament.

This king imprisoned his mother Isabella at Castle Rising


He was only 14 when his father was murdered, probably on his mother's orders