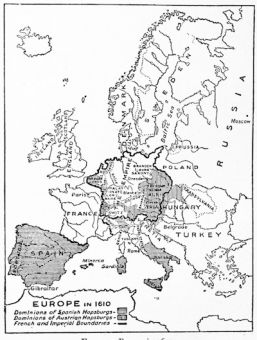 The king's foreign policy was dominated by a fear of Spain which was not shared by the English people. The strife which had continued through the last years of Elizabeth was terminated sensibly enough by a peace almost immediately after James's accession. But James was possessed by an extravagant obsequiousness to Spain, which led to one of the most shameful incidents of the reign.

Raleigh
To gratify Spain he deliberately sacrificed Sir Walter Raleigh. Raleigh was liberated from the Tower with a permission to seek and take possession of a hidden land of gold mines of whose existence he had heard on the famous expedition to the Orinoco which he had undertaken in Elizabeth's reign. But he had strict orders to avoid a collision with the Spaniards.

Every one concerned was perfectly well aware that a collision with the Spaniards would be absolutely inevitable. Raleigh's expedition was a failure, and the inevitable collision took place. On his return he was arrested, and, to gratify the Spaniards, was ex­ecuted on the strength of his ancient condemnation for complicity in the Main plot.

At the time of Elizabeth's death Raleigh had perhaps been the best hated man in the kingdom; but the circumstances of his trial had caused a revulsion of sentiment in his favour; he remained the incarnation of the old popular feeling of undying hostility to Spain; and, by sacrificing him to Spain, James turned him into a popular hero.

James in fact wished to keep on good terms with both Catholics and Protestants on the Continent. He could not realise how completely the Spanish Government regarded itself as the agent of Heaven for the suppression of heresy, nor the intensity of religious antagonisms, and he wanted himself to be regarded as a Solomon whom every one would willingly invite to arbitrate upon their differences. So he married his daughter, the Princess Elizabeth, to Frederick the elector palatine, the head of the Calvinistic princes of Germany.

He would have tried to marry his own heir-apparent, Prince Henry, to a Spanish princess, but Henry had made to himself a hero of Raleigh, who was then in the Tower, and would have nothing to say to a marriage with any Romanist, least of all a Spaniard.

The prince's premature death in 1612 made the king's second son, Charles, heir to the throne, and presently James revived the idea of a Spanish match, which was one of his motives for the destruction of Raleigh. He left out of consideration that, on the one hand, Spain cared nothing for the match, except as a means to restoring Romanist pre­dominance in England, and, on the other, that the English people detested the idea even more fervently than in the days of Queen Mary.

These, he held, were high matters of State on which the people had no right to an opinion. As for Spain, he deluded himself with the belief that she would be quite satisfied with liberty of conscience for Spaniards in England, and some relaxation of the pressure of the penal laws, upon English Catholics. Now matters be­came alarmingly complicated when James's son-in-law, the elector palatine, accepted the crown of Bohemia, which was claimed by Ferdinand, the emperor-elect.

The action of the Bohemian nobles and of Frederick was exceedingly questionable, since the Bohemians had actually pledged themselves to accept Ferdi­nand, and had broken that pledge, though not without some excuse, in offering their allegiance to Frederick. But there was the plain fact that the son-in-law of the King of England was plunged into a war with the head of the Austrian Hapsburgs, that the Spanish Hapsburgs were in alliance with their cousins, and that there was every prospect that Frederick instead of winning the Bohemian crown, would be deprived of the Palatinate.

There was also a further probability that this would be only a step to an onslaught on the Protestant princes of Germany, who had not the wisdom to suppress their own quarrels and present a united front to the impending danger. James hated war, and flattered him­self that he could detach Spain from the alliance by pressing forward a Spanish marriage. A vigorous interposition might have effected something, but nothing whatever was to be hoped from a diplomacy which did not rely upon armed intervention as its ultimate argument. Frederick's forces met with a severe defeat at the White Mountain, in Bohemia, and Spanish troops from the Netherlands marched into the Paiatinate.

If James was to save his son-in-law from complete ruin, it was quite clear that lie must arm; and he could not possibly arm without assembling a parliament and obtaining supplies. So in 1621 Parliament was sum&moned. Its last predecessor had been the Addled Parliament of 1614. As matters stood there were two possible war policies; one was to take an energetic part in the war In Germany, the other was to attack Spain.

The country was quite willing to attack Spain. It knew little and cared not much more about Germany; It took no interest in the king's German connections. But if there was going to be a stand-up fight between Rome and Protestantism, the traditional course for England was to fasten itself upon Rome's traditional champion, Spain; and war with Spain brought compensation to adventurers, apart from the comfortable sense that it was a smiting of the Amalekites by the chosen people.

Parliament, however, had not yet reached the stage of claiming to dictate the particular course to be followed. The programme set before it was negotiation, and war if negotiation failed. It professed enthusiastic accept­ance of the programme, especially the second part of it, but voted by no means as much money as the king wanted, being very far from confident that the subsidies would be expended to its satisfaction. Having voted the money, it turned to accumulated grievances—it had been practically silenced for ten years, and since the death of Salisbury in 1612 the conduct of the administration had not commended itself to public favour.

Fortune had set beside the king a counsellor who understood the Tudor principles of statesmanship. But King James was far too sure of his own supreme wisdom to allow himself to be guided by the wisdom of Francis Bacon, while he allowed himself to be tricked and cajoled by favourites, to whom statesmanship meant nothing but personal intriguing for wealth and power. Youthful good looks provided a ready passport to the royal favour.

The Overbury murder
Cecil had known how to keep such proteges from becoming too influential the man who had destroyed Essex and ruined Raleigh knew how to secure his own ascendency. But after Cecil's death, he who desired the king's favour required first the favour of the king's favourites. The first of these was Robert Kerr, created Earl of Somerset, who was fortunately ruined by the discovery that his wife, with his own connivance, had procured the murder of Sir Thomas Overbury, who had stood in the way of her divorce from the Earl of Essex, which had been a necessary preliminary to her marriage with Kerr. Somerset's successor, with all his faults, remains a figure with a certain splendid fascination if only by reason of his magnificent arrogance.