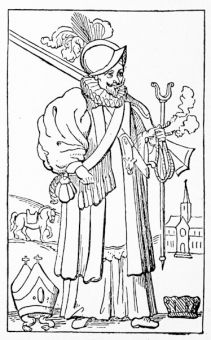 The Church Militant; a Bishop of 1642, from a contemporary caricature

Strafford's head had hardly fallen when the Commons set about reaping the fruits of their victory. In three months every instrument of absolutism on which the king had sought to rely throughout his reign was abolished. While Strafford was still in the Tower, government without parliament had been abolished by an Act requiring that parliament should assemble at least once in every three years, with or without the royal summons.

Parliament asserts itself
An Act was now passed which forbade the dissolution of the existing parliament without its own consent. The right to ship-money, tonnage and poundage, and customs duties was formally abrogated. The arbitrary courts of Star Chamber, of High Commission, and of the Council of the North were abolished, so that no offenders could be tried except by the ordinary courts under the ordinary law.

So far Lords and Commons had acted together. Save in the matter of the attainder of Strafford, the whole series of Acts only abolished claims of the Crown which had never been admitted by the Commons, or removed glaring abuses. But now the Commons began to assert powers which they had never pretended to claim before King Charles ascended the throne.

The Root and Branch bill
They attacked the bishops, in a bill which demanded their removal from the House of Lords and from the Privy Council; and this brought them into collision with the House of Lords, which rejected the bill. The advanced Puritan party in the Commons responded with a bill aiming not at a compromise but at the abolition of Episcopacy, known as the Root and Branch bill. For the first time the Commons themselves were divided, while the majority in the Lords was in direct opposition to the majority in the Commons.

Scotland
But the contest was deferred. The Scots army had now been duly paid off, and Charles paid a visit to the Northern kingdom, where Montrose and others had now broken away from the Covenanting chiefs, headed by Argyle, whose domination was hotly resented in many quarters.

The king, however, found the party of revolt so weak that he was obliged to place himself in Argyle's hands, and Argyle himself was strengthened by the discovery of a plot against his person, in which both the king and Montrose were implicated, though without justification, by popular rumour. And while the movement of affairs in Scotland was disturbing, events of a still more serious character were taking place in Ireland.

Ireland
Wentworth had ruled Ireland with a strong hand. Disorder had been crushed and prosperity had begun to make its way. But the order and the prosperity both depended upon the unscrupulous vigour and ability of a fearless Deputy. When Wentworth vanished behind the portals pf the Tower, there was no one to take his place in Ireland, and no one to curb the hostilities of the settlers and the native Irish, of Catholics and Protestants, of family rivalries.

While Strafford lived, there was always the chance that he would return, and the certainty that if he did it would be in an evil day for any one who had tried to make trouble during his absence. But the restraining hand was gone, and in the autumn there came a sudden savage outburst of the Irishry against the Englishry.

Ghastly tales of brutal barbarity and of blood-thirsty massacres flew over England. The truth was hideous enough, and became fivefold more hideous in the telling. England raged for vengeance, but — where was the avenger? If an army were despatched to Ireland under the king's officers, what would that army do? Suspicions grim and foul were in men's minds.

The rising was the work of Jesuits, of Papists; perhaps the king's French wife was at the bottom of it; it was a plot to provide the king with an army for destroying the liberties of England. For such wild suspicions there was no sort of justification; but the plain fact stood out, that if an army were placed under the king's control the work which the parliament had just accomplished would almost inevitably be undone.

Almost at the moment when the news arrived from Ireland, the parliament which had been adjourned in August reassembled. The only constitutional action possible was vote supplies for an Irish war, the control of which would be in the king's hands; which was precisely the thing which the parliament, or at least the Puritans, dared not do. The alternative was to show cause why the king should not be trusted with a control which was his by constitutional right.

The Grand Remonstrance
So the Opposition leaders drew up the Grand Remonstrance, a detailed indictment enumerating all the arbitrary proceedings, all the misgovernment, with which the king had been charged. It was a statement of the case for parliament against the Crown. The Grand Remonstrance completed the work of dividing the Commons, which had begun with the Puritan attack on the constitution of the Church.

It amounted to a virtual, though not a formal, demand for the abdication of the kings sovereignty. It rallied to the support of the Crown all those who, while they had been ready to insist on limiting the royal prerogative, dreaded the unchecked tyranny of an irresponsible House of Commons more than the tyranny of the king.

Hour after hour the stormy debate raged; not till after midnight was the division taken and the Remonstrance carried by eleven votes. Then a motion was brought forward that the Remonstrance itself should be printed and published; the storm broke out with redoubled fury when the minority proclaimed their intention to protest, a course to which there was no precedent. Swords were drawn; it seemed that blood would be shed on the floor of the House itself, when John Hampden succeeded in procuring the adjournment of the debate.