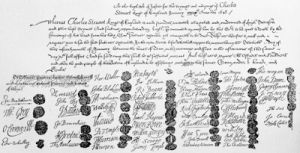 The warrant for the execution of Charles I

In Ireland, the death of Charles I united against the regicide government the Cavalier element and the native Irish — to whom any English government was sufficiently detestable, but a rule at once English and Puritan was an abomination. In England itself, Cavalier loyalty and Presbyterian respectability were, according to circumstances, stung to fury or grievously shocked at the usurpation of Sectarians and regicides.

Finally, in the victorious party itself, an angry spirit was aroused among many who had looked for liberty at least for themselves, and now saw, occupying the seats of the mighty, men who could not refrain if they would from acting despotically. Even of the fleet, a substantial portion declared at first against the new regime.

The government weathered the storm. A stern and remorseless discipline arrested the mutinous spirit in the army; in the navy, after the first moment of doubt, it became evident that the great preponderance lay with those who declared for loyalty to the Commonwealth.

The last year's campaign had impressed upon Cavaliers and Presbyterians the futility of armed insurrection. Foreign Powers might be hostile, but they had other things to think of than intervention in English affairs. Scotland did not espouse the cause of Charles's son, would not even hasten to set the crown of Scotland itself on his head, until she had made her own terms with him. The pressing danger was in Ireland, where Cavaliers and Catholics together threatened to wipe out their opponents, and to provide a basis whence the combined elements of disaffection might organise an attack on the English Government.

Cromwell arrives in Ireland
To Ireland, then, Cromwell was despatched in the August after the execution of King Charles; and he dealt with that country on the general principle that his opponents were rebels; at any rate that those humane modifications in the commonly recognised laws of war, which had habitually prevailed during the contest in England, were not to be applied in Ireland. Here, at least, he acted on the conviction that by striking ruthlessly at once he would make a prolonged war and prolonged bloodshed impossible.

Drogheda and Wexford
He turned upon Drogheda, stormed it when it refused to surrender, and no quarter was given to those in the town who were in arms. Then he fell upon Wexford, which was treated after the same fashion, though this time the slaughter was carried out by the soldiery without direct orders.

The massacres of Drogheda and Wexford served their purpose. When Cromwell had made it clear that resistance in the first place was futile, and in the second place would be punished without mercy, resistance practically dis­appeared. Garrison after garrison surrendered after being summoned, and there was little more actual bloodshed. Cromwell was perhaps right in believing that so far as the immediate war was concerned the truest mercy was in mercilessness.

Moreover, he suffered from the conviction common to practically all Englishmen, for at least a century past, that the Irish were too barbarous to understand other methods than those of barbarism; they were savages, controllable only by terrorism. For the rest, again in common with all Englishmen, he believed in the full tale of the atrocities committed in the Irish insurrection of 1641, and imagined that the worst he did fell far short of being a just punishment for the crimes of the past.

Consequences
Terror triumphed; but Cromwell had not exacted the full penalty in the streets of Drogheda and Wexford. Sweeping confiscations of land followed, and numbers of the Puritan troopers were planted on Irish soil, to form an effective garrison for years to come. But if Cromwell's doings tended, as he believed, to save the effusion of blood, they sowed afresh the seeds of racial and religious hate, that monstrous crop which was to be reaped by generations upon generations as yet unborn, the black inheritance of the Curse of Cromwell.