Reaction to the Death of Charles I 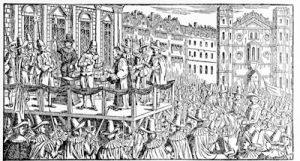 The execution of Charles I in Whitehall, January 30, 1649 from a print of the year

Englishmen above all people in the world love adherence to precedent and custom; but in the government of England, now, precedent and custom were toppled into the abyss. Hitherto, for some four centuries at least, king and parliament had shared authority, though with differences of opinion as to their respective proportions. No one had ever dreamed of such a thing as the arraigning of a king before his own subjects for treason.

None except kings had ever challenged the right of free access to parliament by its members, the right of freedom of debate, or the right of free decision. Kings, relying on the support of the will of the nation, had curbed barons; barons relying on the same support had curbed kings; kings had ruled autocratically when their policy harmonised with the national feeling expressed in parliaments; parliaments with the will of the people behind them had refused submission to kings. But the Great Rebellion had reached a climax, when the monarchy was abolished altogether, and the authority of parliament was scattered to the winds because parliament had ceased to represent the national will.

In fact there was no national will, but a mere chaos of conflicting parties; and out of this chaos had emerged one body strong enough to impose its will upon the rest. No other form of government was possible. That body had made up its mind to have done with the monarchy; it did not wish to have done with parliament, but there were no visible means of procuring a parliament capable of exercising the functions of government. So it took the parliament that was there, purged it in accordance with its own views, abolished the House of Peers, and endeavoured to treat the Rump in the House of Commons as the Representative Assembly of the nation.

Through the Rump it constructed an Executive Council, composed partly of military officers, partly of members of the Rump itself; and Council and Rump together provided the government of the nation. The one thing vital for the moment was, for that government to establish and maintain its own authority, since reversion to chaos was the sole alternative.

The new government was threatened on every side, from without as well as from within. As a regicide government, every state in Europe would have rejoiced at its downfall, and not least Holland, whose young Stadtholder, William II, was brother-in-law to the claimant of the English throne. Scotland was righteously indignant; for the people of England or their rulers had cut off the head of the King of Scotland, to whom the Scots had never ceased to profess loyalty, even when they were in arms against him, or when they handed him over to his English subjects.

Moreover, Scotland was entirely hostile to the Sectaries, who had now taken control of affairs, and in particular to the Man who had led the Sectaries to victory.