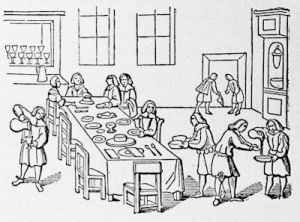 A dinner party under the Protectorate, from the English edition of the Janus Linguarum of Comenius

Humble Petition and Advice
Cromwell's second parliament met two years after the first. It is noteworthy that it embodied popular resentment not against Cromwell personally but against the Army. It recognised in Cromwell himself the indispensable man. Like its predecessor, this parliament too was "purged" by the exclusion of about a hundred members. The successes attending the Protector's foreign policy, to which we shall presently revert, increased, his personal prestige.

The discovery of a plot against his life awakened a vivid consciousness that Oliver himself was the keystone of the arch, the structure of the Commonwealth, which would collapse in ruin if he were removed. It seemed necessary at least that the Commonwealth constitution should be modified in two directions. The office of the Protector must be so modified that its functions could be efficiently discharged without danger to the State when Oliver himself should be no longer Protector; and the power of the Army itself must be reduced, even if in the process the personal authority of the Protector himself were increased.

A new constitution, then, was promulgated by the parliament, under the name of the Humble Petition and Advice, after the major-generals had been withdrawn and a bill sanctioning the taxation of Cavalier estates had been thrown out. It must be remembered that Cromwell's arbitrary powers were suspended whilst parliament was in session. The Petition went so far as to make the office of Protector permanent, to empower Cromwell to nominate his own successor, and actually to offer him the title of king.

The Rump had been intolerable because there had been no check on the arbitrary exercise of authority by a single Chamber. The Petition sought to prevent the resuscitation of this danger by reconstituting a second Chamber, a new House of Lords nominated by Cromwell but subject to the approval of the House of Commons.

On the other hand, the Protector was to surrender the right which he possessed under the Instrument of Government of arbitrarily excluding members from the Commons. The principle was at the same time formally laid down that all forms of Christian religion were to be tolerated except the Romanist and the Episcopalian. Socinianism, which rejects the Divinity of Christ, was outside the pale.

The Humble Petition and Advice was accepted and became law, with the exception of one point. Oliver declined the title of king, not, it would appear, without reluctance. But a sufficient reason for the refusal must be found in the strong antagonism of the Army to the proposal. Oliver could not afford to make the army hostile.

Policy, too, demanded the refusal for other reasons, since in Englishmen's minds at least the idea of kingship was hedged about with the traditions of long centuries, traditions belonging to the office, not the individual, and wholly incompatible with the elevation to that office of a man with whom they could by no possibility be associated. In a minor degree the prestige even of the new House of Lords was similarly threatened; it was remote from the associations which gave dignity at least to the old House of Peers.

Nine months had elapsed between the first meeting of the new parliament and the installation of the Protector under the new constitution. Parliament was not dissolved but prorogued, and met again in the following January, 1658. But a change was at once apparent.

The pick of Oliver's supporters had been transferred to the Upper Chamber, and the hundred elected members of the Lower House whom he had excluded were necessarily admitted under the new constitution. Thus, there was really a new House of Commons, which at once proceeded to attack the constitution which a parliament nominally the same had only just set up.

Almost its first movement was to attack the new House of Lords in the endeavour to re-create that despotism of the House of Commons, the curbing of which was the 'precise object with which the Second Chamber had been constituted. Once more the attempt to invent a working constitution had failed. Once more Oliver had no alternative but to assert his own supremacy. He dissolved his second parliament. Alone upon his own shoulders he bore the burden of the State during the few months of life which remained to him.