Edward I and France 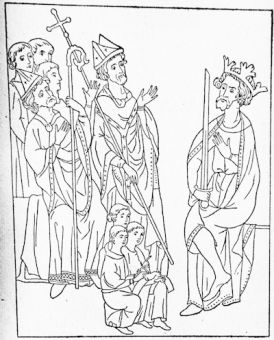 Edward I receiving the Bull of Pope Boniface VIII, from a MS. written and illustrated in Edward's reign

Edward's design was to throw a force into Flanders strike at France on the north-east, instead confining himself to military operations in Gascony itself. Of this force he intended himself to take command, while the Constable and the Marshal, the Earls of Here­ford and Norfolk, the highest military officers of the kingdom, were to command in Gascony. Both refused flatly, on the ground that while they were bound to follow the king in person, they were not bound to go to Gascony with­out him. And there was no disputing the fact that the technical right was on their side.

Meanwhile the exigencies of the situation had driven the king to further arbitrary exactions. Again he seized large quantities of wool, and extracted a heavy fee called a mal-tolte from merchants who had been allowed to retain their goods. A spirit of resistance was kindled, and nothing, perhaps, testified more completely to the real strength of his character than the wisdom of the concessions by which he retrieved the situation without loss of dignity. As concerned the clergy, indeed, not only lay sentiment, but probably that of half the clergy themselves, was on his side. It was the clergy who gave way, not the king.

The two earls having refused to serve in their capacity as marshal and constable, the king yielded on the technical question, and their places were taken by other barons. In like manner Edward publicly admitted that there was no feudal obligation to accompany him to Flanders, and offered pay for volunteer services, whereby he was enabled to raise an adequate force. He was at pains to pay for all the military supplies which had been seized, and announced that in due course the wool impounded should also be paid for.

The North was left to look after Scotland, where Wallace had just raised anew the banner of insurrection; and the king and his army departed for Flanders, while Gascony was left to take care of itself.

De Tallagio non Concedendo - taxation only with consent
But even at the last moment the two recalcitrant earls presented a demand for a confirmation of the Great Charter and the Forest Charter; and they made it clear that the further collection of supplies would be made exceedingly difficult unless their demand was conceded. They did not stop the king's departure, but six weeks later, when the regency which had been left in charge of affairs summoned a parliament, they appeared in arms and presented a petition which later generations interpreted as a statute, De Tallagio non Concedendo, and cited practically as if it had been a second Charter; it required that the claims called tallages or aids should not be imposed without the consent of parliament.

The regency responded by publicly confirming the charters, to which they added the express inclusion of the male-tolte, though not of tallages, as a burden which might not be imposed except by assent. The action of the regency was endorsed by the king in Flanders, and this Confirmatio Carfarum of 1297 stands out in constitutional history as a landmark hardly less prominent than the issuing of the Great Charter itself or the calling of the Model Parliament.

The great Flemish expedition, which had brought about the crisis, came to nothing from a military point of view. Philip brought up an army too big for the English and their allies to attack, while he was afraid himself to adopt the offensive. When the kings had got tired of doing nothing they agreed to refer their quarrel to the Pope, in his private capacity, for ration. The enemies were reconciled; Edward took to his second wife the French king's sister, while the Prince of Wales was betrothed to his infant daughter. Both parties tacitly dropped their allies; and for the remainder of Edward's reign England and France were on terms of amity. Edward's return in 1298 was followed by the Falkirk campaign, but Scotland remained sporadically in arms.

Through the winter and the whole of the year following Edward was much occupied with efforts to avoid giving effect to the Confirmation of the Charters, whereby much irritation was revived among both baronage and commons; however, in the spring of 1300 he found himself compelled to give the royal sanction to what were known as the Artieuli Super Cartas, which were in effect additional clauses dealing with recent grievances. But still another year passed before the reconciliation could be regarded as complete.

The papacy claims Scotland
Perhaps what conduced more than anything else to this consummation was the action of Archbishop Winchelsea, who supported Pope Boniface in a claim to interfere between England and Scotland, on the somewhat amazing ground that Scotland belonged to the papacy.

The barons were as angry as the king, and a reply was returned to the Pope signed by more than a hundred of the lay magnates, in which he was very bluntly warned that temporal affairs were the king's business and not the Pope's. The remainder of the reign was mainly occupied with Scottish affairs, which can now be recorded in detail.