Edward I and the Constitution 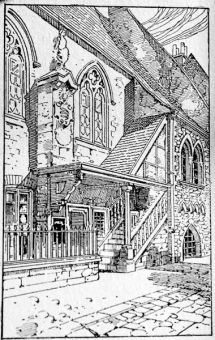 The Toll House and Prison, Great Yarmouth, mostly built in the 13th century

It is a common note of constitutional struggles in England that they have been largely concerned with questions of finance. Primarily in theory the policy of the State was the policy of the king. The king was supposed to live " of his own," and so long as he could pay his own way he could follow what policy he chose.

But if he sought to pursue an expensive policy he could not live " of his own," and must supplement his resources by taxation of one kind or another; that is, he must either persuade or compel his subjects to provide him with additional means. Persuasion involved convincing them that the objects he had in view were desirable; in other words, as long as his subjects could refuse supplies, they could paralyse the king for action, and therefore could in effect control his policy.

The Crown, seeking a freehand, sought also every available means of raising revenue otherwise than as a grant by favour of the subjects. The subjects, on the other hand,'without in the first instance having any particular desire to interfere with policy, resented arbitrary exactions. The mere fact that, by doing so, they found themselves exercising a control over policy, taught the people to regard the control of policy as an end to which the control of finance was a means; but to begin with, the motive of the subjects' resistance to taxation was not a political one but a simple objection to being arbitrarily deprived of their property.

No arbitrary taxation
Thus the principle laid down, in the Charter had been that taxation should not be arbitrary; that apart from the liabilities established by recognised custom, no additional, liabilities should be imposed without the subjects' consent. It is not till the time of Edward I that we have indications of an inclination to be jealous of the development of new sources of revenue in the hands of the Crown; to resent anything which helps the Crown to act independently of supplies voluntarily granted by the people. It is the exigencies of war and the expenses involved by war that bring financial and therefore constitutional questions into the foreground of the latter portion of Edward’s reign.

The Scottish succession
The affairs of Scotland demand separate and consecutive treatment, but their bearing upon other aspects of the years between 1290 and 1307 necessitates some inference to them here. The death of Alexander III in 1286, followed by that of his grand­daughter Margaret, the Maid of Norway, four years later, opened the debatable question of the succession to the Scottish Crown.

The King of England consented to arbitrate between the various claimants on condition that his own suzerainty should be formally recognised. The demand was admitted by the Scottish magnates, and after a prolonged inquiry and investgation, judgment was delivered in 1292 in favour of John Balliol, who became King of Scotland as Edward's vassal. But when it became evident that Edward meant to treat his suzerainty not, like his predecessors, as a mere formality, but as a substantial fact, Balliol and the magnates attempted defiance.

William Wallace
Edward counted Balliol as a recalcitrant vassal, declared the crown forfeited, invaded Scotland, and set up an English, government in 1296. In 1297 Scotland was in revolt, led by William Wallace, and the English garrison was expelled. Next year Edward again invaded Scotland, and routed the Scots at Falkirk, but withdrew at the end of the year, leaving the country by no means subdued. Another invasion in 1301 was ineffective, but a campaign in 1304. was followed by a reorganisation of the government of Scotland in 1305. Balliol had dis­appeared at an early stage; Wallace, the popular Scottish hero, was captured, and executed in London as a traitor in 1305.

Robert Bruce
But in 1306 a new liberator appeared in the person of Robert Bruce, and Edward was once more preparing for what he intended to be a final and crushing conquest when he died, a few miles from the Scottish border, in 1307.

Now in the year 1292, after twenty years of rule, Edward's position appeared exceptionally strong. He was the officially acknowledged over­lord of the whole island from end to end, suzerain of Scotland, and master of Wales. He had acquired an almost unprecedented reputation as a legislator. The Marcher earls of Hereford and Gloucester had incidentally learnt that they must not presume upon their privileges. Ecclesiastical encroachments had been held in check. After the settlement of Wales Edward had spent three years abroad, mainly in Gascony, where his relations both with his subjects and with his suzerain, Philip IV of France, were apparently satisfactory.

Edward's personal prestige among the sovereigns of Europe was exceedingly high. Nevertheless both in France and in Scotland trouble was brewing, while in England there were members of the baronage, notably Humphrey de Bohun, the Earl of Hereford, who were vindictively disposed.

Trouble began with France. Philip IV meant to get Gascony into his own hands, though he did not intend to go to war over it. But apart from the antagonistic interests of the two kings in Gascony, their subjects on either side of the English Channel were constantly at feud, each perpetually charging the others with piracy. In 1293 there was an organised sea-fight, in which the English were completely victorious. Philip IV used the opportunity to summon Edward before him as a vassal.

Edward, particular always in insisting on the letter of the law, could not on his own principles ignore Philip's claim. For form's sake certain castles in Gascony were temporarily placed in Philip's hands. Having got the castles, Philip showed his hand, pronounced the duchy forfeited on the ground of Edward's contumaciousness, and proceeded to establish his own government.

Philip's action made war inevitable. Parliament was called, large grants were made reluctantly enough by the estates, and further, the king arbi­trarily took possession of the wool, the staple export of England, which was lying at the ports, and compelled the merchants to redeem it at a high price. A considerable force was collected and despatched to Gascony. Even the Welsh wars had proved that feudal levies, with their limited periods of service, provided at the best of times very unsatisfactory armies for the conduct of long campaigns.

Now, the claims for compulsory service over­seas led to that Welsh insurrection which was only suppressed at the beginning of 1295 by the battle of Maes Madog. The Welsh rising hopelessly crippled the expedition to Gascony, where Edward's forces met with repeated disaster. It was hardly suppressed when the Scots added to the complications by making a treaty with France, the beginning of an alliance which was to be as a thorn in the side of the English for more than two and a half centuries. Edward even saw himself threatened with a French invasion.

The king met the immediate danger by a strategic organisation of the fleets in the Channel which marks the first clear recognition of command of the sea as a specific need of the military organisation. But beyond this it was realised that a situation had arisen in which it was emphatically necessary that the nation should consciously identify itself with his policy, and to this end he summoned the Model Parliament of 1295.

The summons to parliament included the significant pronouncement that "what touches all should be approved by all," and that the common danger should be faced with a united front. To this parliament Edward called all the magnates, lay and ecclesiastical, representatives of the lower clergy, two knights from every shire, and two burgesses from every borough. Parliament had at last almost achieved its permanent shape.

The three estates, baronage, clergy, and commons, met and deliberated separately, each estate taxing itself in answer to the king's appeal. The baronage voted an eleventh, the clergy a tenth, the boroughs a seventh. But it is to be observed that at this stage the knights of the shire voted with the baronage, not with the burgesses. It was not till nearly forty years afterwards that the different division was established under which the hereditary and ecclesiastical magnates sat in one chamber, the shire and borough representatives in another as the Commons, while the clergy ceased to attend as an estate of parlia­ment, but made their grants in their own separate assembly, called Convocation.

Though Edward was thus enabled, with the nation at his back, to make great preparations for meeting the gathering storm of war, he felt himself obliged to divide his forces; and himself spent the year 1296, as we have seen, in an invasion of Scotland, while the second expedition was despatched under his brother Edmund to Gascony. Though the Scots war was to all appearance completely successful, the expedition to Gascony fared little better than its predecessor.

Ciena's Laicos
Free to concentrate on the French war, Edward called a new parliament, where the barons and the commons gave the king liberal support; but to the intense indignation of every one else concerned, the clergy declined to contribute. This surprising action was the outcome of the celebrated Bull known as Ciena's Laicos, issued by Pope Boniface VIII, forbidding the clergy to make contributions for secular purposes except with the permission of the Holy See; an injunction which had perhaps been issued not so much with the object of asserting papal authority as to prevent the revenue of the Church from being devoted to the carrying on of war between Christian princes.

The effect, however, was intolerable to the kings both of France and of England. But while it brought the Pope in direct personal collision with Philip, the collision in England was between the king and Arch­bishop Winchelsea, the successor of Peckham.

The Archbishop pleaded in vain that the clergy were ready enough to make the grant, but that their allegiance to the Pope forbade their doing so until they had obtained his permission. This doctrine, that allegiance to the Pope stood before alle­giance to the king, was peremptorily rejected. The king replied that unless the clergy made a contribution of a fifth, they should be outlawed – that is to say, denied the protection of the civil law – and proceeded to carry the threat into execution.

The clergy did not hold out long, but some of the barons who owed the king a grudge found their opportunity. Edward had formed an alliance with Count of Flanders, the friendship of Flanders being of great value to England.


The existing street gave its name to the court buildings

The court tries offences committed in the city of London