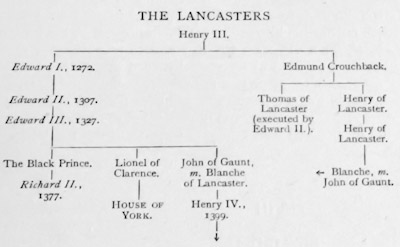 The House of Lancaster from Henry III

Piers Gaveston recalled
From the English point of view Bannockburn was merely the most disastrous incident in a reign which presents us with no incident and no character that Englishmen can think of with pride or respect. When it has been recorded that Edward of Carnarvon was not a bloodthirsty tyrant, or personally vicious, there is nothing left to be said in his favour. He lacked even the personal valour in which his grandfather, Henry III, was not deficient, as well as the intellectual sympathies and the personal piety which were at least amiable traits in that monarch's character. He is redeemed from unmitigated contempt rather than from positive execration mainly by his tragic end.

His grim father's body was hardly cold when the young king was already doing his best to make havoc of his policy. His first step was to recall to court his boon companion, the young Gascon knight, Piers Gaveston, whom his father had banished as being no fit companion for the heir to the English throne. Gaveston's sole merit lay in the beauty of his person, the frivolous wit, the showy accomplishments, and the superficial cleverness which had conquered the affections of the young Edward; who now made haste to marry him to his niece and endow him with the earldom of Cornwall, which had recently passed to the Crown by escheat. There was a general ejection of the old king's officials, who were largely replaced by men whom Edward I. had conspicuously distrusted. There was no immediate opposition. The baronage had had little enough sympathy with the masterful monarch whose strong hand had been removed by death, and were content to await events. If the young king tried to play the part of Rehoboam, he was not likely to fare any better than his prototype.

With the turn of the year, Edward proceeded to France to espouse the youthful bride, Isabella, to whom he was betrothed. He left the regency in the hands of the new Earl of Cornwall, but no open dissatisfaction was yet expressed. Within two months, however, of Edward's return and coronation, the simmering wrath of the barons had reached boiling point. The mocking tongue of the Gascon upstart was not to be endured. The old Earl of Lincoln and the young Earl of Gloucester, both loyal adherents of the Crown, were drawn into the circle of disgusted opposition.

... and sent away
A parliament, of the baronage only, met in April, and unanimously demanded that Gaveston should be banished and deprived of his new earldom; while the bishops, headed by Winchelsea, threatened him with excommunication. The king, finding himself helpless, sent Gaveston off to Ireland as Lieutenant. Twelve months after the parliament of barons, Edward's need of supplies caused the summoning of another parliament of the three Estates. The Estates at once drew up and presented a schedule of grievances; and by promises to remedy these the king secured from the magnates their assent to the recall of Gaveston - always excepting the implacable Guy, Earl of Warwick, whom the favourite had nicknamed the Black Dog of Arden.

Lords Ordainers
But Gaveston was as irritating, and the administration through the king's favourites as incompetent, as ever. Again within twelve months the parliament of the barons took matters into their own hands. They met in arms. They demanded unanimously the banishment of Gaveston. But they went very much further; reverting to the precedent of the Mad Parliament of 1258, they demanded that the government should be placed in the hands of a committee of magnates. They set forth the grievances of the realm.

Like their predecessors fifty-two years before, they ignored the assembly of the Estates, and claimed in effect that a baronial oligarchy should perform the functions of an absolute monarchy. Backed as they were by the whole feudal force, and probably by the whole popular sentiment, of the nation, the king could offer them no resistance; and after the precedent of the Provisions of Oxford, a committee of twenty-one "Lords Ordainers" was appointed, with full powers of government for eighteen months. Seven bishops, eight earls, and six barons made up what may be called the Committee of Reform. They did not immediately strike at Gaveston, but at first, at least - endeavoured seriously to deal with some of the more serious ills of the administration.

Edward spent the latter part of the year in an abortive expedition to Scotland. Then Lincoln, the last of the old king's trusted servants, and the most powerful influence among the barons on the side of moderation, died; and Thomas of Lancaster, the King's first cousin, now lord of five earldoms, became indisputably the head of the baronage. About Midsummer the Ordainers had completed their scheme of reform, which was then submitted to a parliament of the three Estates.

Reforms
Various laws in the Statute Book were to be properly enforced. The "New Customs" were to be abolished. All officers of State both in England and in Gascony were to be appointed by counsel and consent of the barons, and a baronial parliament was to be summoned once or twice annually. War and peace, even the king's personal movements as well as every department of government, were to be under the control of the barons. Gaveston and all his kinsfolk and following were to be banished; so were the Lombards and Florentines who had become the financial agents of the Crown.

Gaveston's murder
Gaveston departed, but early in 1312 he was back again in the north of England, and in the king's company. Five of the earls, Lancaster, Pembroke, Hereford, Arundel, and Warwick, joined by Warenne, who was not one of the Ordainers, took up arms to enforce the Ordinances of the previous year and to hunt down Gaveston. None took the king's side. Gaveston surrendered to Pembroke and Warrene, under promise of protection; his fate was to be submitted to the decision of parliament. But while Gaveston was travelling south in Pembroke's custody, Warwick captured him, and in conjunction with Lancaster, Here­ford, and Arundel, cut off his head on Blacklow Hill.

This violent action split up the Ordainers. Pembroke, and in a less degree Warenne, felt that their honour was implicated. The young Earl of Gloucester had always been opposed to extreme action. The king's hand being thus strengthened, the four earls who had been responsible for Gaveston's death presently submitted to a form of reconciliation and amnesty which was ratified at the end of 1313.

Bannockburn
The reconciliation was celebrated by Edward's great invasion of Scot­land, which ended with the huge catastrophe of Bannockburn, where Gloucester was killed and Hereford was taken prisoner. But Hereford was exchanged for the ladies of Bruce's family, who had been held prisoners in England ever since 1306. The disaster was a political triumph for Lancaster's faction.

Lancaster at once became the most powerful man in the realm, and had he been a real statesman, or even a tolerably competent administrator, he would now have had a magnificent opportunity. He was neither the one nor the other, and anarchy reigned from end to end of the kingdom. His supporters fell away; and Pembroke, who had never forgiven the Gaveston affair, devoted himself to forming a middle party, which acquired a definite ascendency in 1318 and gave the country a less desperately anarchical government for some three years. More could scarcely be said for it.