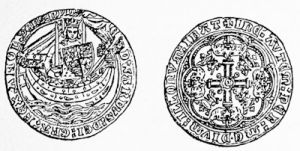 The customs then provided a source of revenue which in previous centuries had hardly been taken into account; but it was one which the king could only to a very limited extent claim as falling within his control. Except as concerned the "Ancient Customs," it was a source of supply which it was technically within the power of parliament to cut off, although in practice an authority to levy particular customs, frequently renewed, was likely to become permanent as a matter of course if not as a matter of technical right.

Tonnage and poundage
Thus the impost called tonnage and poundage, a fixed tax upon every ton of wine and every pound of merchandise imported, was first sanctioned towards the close of Edward's reign, renewed for periods of two or three years, and gradually became a practically assured source of income; until in the reign of Henry VI. it was granted to the king for life, and continued to be so granted at the beginning of each reign until the accession of Charles I.

Similarly, Edward I. had laid tallages upon the towns, and bargained with the merchants for subsidies on wool. Both practices had been challenged, but neither had been definitely prohibited; and Edward III made use of both. But both were finally prohibited in his reign by statute, the tallages in 1340 and the wool subsidies in 1362.

Practically the permanent expenditure so far exceeded what the king could meet out of revenue under his own control that he was in constant need of specific grants from parliament; especially after the ruin of the Florentine bankers, by Edward's repudiation of his debt, made it impossible for him to borrow on a large scale.

The form followed was for the king to invite the Estates to grant him what was needful; they responded each according to its own willingness and capacity, the barons, the clergy, the shires and the cities taxing themselves severally. Thus it became the custom with the Commons to make a tenth and a fifteenth the standard subsidy; which on occasion might be raised to two-tenths and two-fifteenths.

But the right was reserved of presenting petitions for legislation as a condition preliminary to the grant being made. It did not, however, follow that the statute actually promulgated was a precise fulfilment of the petition presented. That principle was not formally laid down until the reign of Henry V.

In 1341, at the time of the quarrel with Stratford, the king to obtain funds accepted the demands of parliament; yet a few months later he repudiated his promise and cancelled his concessions. But when parliament again met, its formal assent to that cancellation was obtained, and the king did not repeat the experiment.

When, five and thirty years later, John of Gaunt on his own authority cancelled the Acts of the Good Parliament after its dissolution, although the parliament immediately following endorsed his action, it was subsequently enacted formally that Acts of parliament could only be repealed by Act of parliament.

Of the legislation of the reign an important portion consists in the various declaratory Acts defining and limiting the rights of the Crown as to raising revenue; much as we saw that precise definition was the object of a great deal of the legislation of Edward I. In the same way the direct outcome of the quarrel with Stratford was the final definiteness of the assertion of the principle of trial by peers.

Statute of Treasons
To the same category of defining Acts belongs the important Statute of Treasons, which for the first time set forth precisely that the crime of treason consisted in the compassing of the death of the king, the queen, or the heir apparent, and in levying war against the king or assisting his enemies. With these were included the slaying of the king's ministers or judges, and counterfeiting the king's coinage or the Great Seal.

Statutes of Provisors and of Praemunire
In another field, legislation pointed to the increase of anti-clerical feeling marked by the Statutes of Provisors and of Praemunire; the first directed against the usurpation by the Pope of the right to make ecclesiastical appointments, and the second against the ecclesiastical custom of carrying appeals to Rome.

In both cases the principles asserted were those which no kings of England had sur­rendered until the submission of King John to Innocent III. Even Edward I, however, had only suc­ceeded in resisting papal claims which were new in his own day; he had not recovered the ground which his father and grandfather lost. But throughout the fourteenth century papal authority and ecclesiastical influence were losing weight; because for three-fourths of the century the headquarters of the papacy were at Avignon instead of at Rome, and the Popes, instead of standing forth as the theocratic heads of Christendom, were politically to a great extent subservient to the French Crown.

The Great Schism
Moreover, when at last the captivity at Avignon came to a head, it was followed by the Great Schism, when there were constantly two rival popes, one of whom was supported by one-half of Western Christendom and the other by the other half. The awe and reverence inspired for two hundred years by the successors of Hildebrand faded; the ground was being prepared for the great revolt against the papacy which culminated in the Reformation, of which Wiclif was already sowing the seed before Edward III was in his grave.

One more feature of the reign remains to be noted in connection with the relations of the Crown with the baronage. Edward III carried to a much higher pitch his grandfather's plan of creating a dominant baronage of the blood royal by the absorption of earldoms and great estates in the hands of members of the royal family.

The great territorial possessions of the house of Lancaster, itself sprung from the brother of Edward I, passed to the king's third son, John of Gaunt, who became Duke of Lancaster, by his marriage with Blanche, the heiress of Lancaster. At the time of Edward's death there was no one else bearing the title of Duke.

Another group of earldoms went to the king's second son, Lionel of Clarence, and passed on his death to the house of Mortimer through his daughter, the wife of the Earl of March. Two other sons survived, of whom one, Edmund, was later made Duke of York, and the other, Thomas, Duke of Gloucester. At the close of Edward's reign the hereditary peers summoned to the Lords' chamber were little more than half as many as those summoned to the Model Parliament; and the process continued during the following reigns.

The old principle of preventing the accumulation of great estates was abandoned for that of accumulating them in the hands of the royal kin; with results which presently proved disastrous.