England at the Time of the Black Death 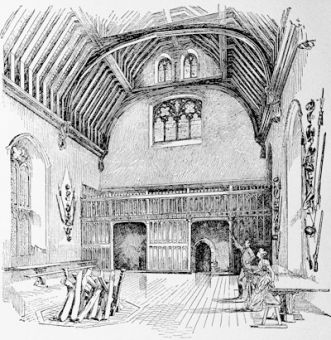 Penshurst, the hall of a 14h century Baron, built about 1340

We turn now to the social conditions and the events which led up to the great Peasants' Revolt of 1381, the story of the revolt itself, and the examination of its importance in the social and economic progress of the country.

We saw that at the time of the Norman Conquest the soil was divided into the demesne lands or private estates of lords of the manor and the holdings of ceorls politically free, though the great bulk of them held their plots "yards" or "virgates" of thirty acres, half virgates of fifteen acres, or still smaller holdings - by payment of agricultural service, or rent, or both, to the lord of the manor.

We saw further that by the reign of Henry II the bulk of these occupiers holding by service had become serfs bound to the soil, this whole class bearing the general name of villeins; among whom were not generally included those who paid rent but not service, nor all of those who paid service.

With the enforcement of the habit of law and order which characterised the Plantagenet rule, the condition of the villeins steadily improved. They were permitted to commute service for rent, though this did not free them from the technical status of serfdom; and it followed that the old forced services were largely replaced by labour for which wages were paid.

Thus there grew up a class of wage-earning agricultural labourers, consisting of landless men and small cottars, who were still technically bound to the soil, though in practice some degree of liberty of migration was permitted. The process continued steadily and almost unconsciously for nearly two centuries; so that in the early years of Edward III the superior villeins were materially little if at all worse off than the yeomanry, that is free-holders or holders by free tenure, although they were socially inferior; while the inferior villeins made their subsistence mainly as wage-earning labourers, enjoying while in full employment wages sufficient to feed and house and clothe them very much better than their contemporaries in France and elsewhere - though they probably found life hard enough in winter and in seasons of scarcity or pestilence.

The Black Death
But in the years which followed the battle of Crecy, England, in common with Europe in general, was visited by the appalling pestilence known as the Black Death. It appeared in England in 1347 and 1348, and recurred at intervals during the next twenty years. So terrible was the visitation that in the rural districts it may be estimated from the evidence that not less than one-third - perhaps a full half - of the population was swept away.

Devastation
The fields were left unfilled, and there was a terrible scarcity of food. The demand for labour greatly exceeded the supply, while the price of provisions rose. The labourer demanded higher wages. High wages and high cost of living reacted on each other; the men would not work except at prices which from the landowners' point of view were extortionate.

Statute of Labourers
In 1350 the government intervened with an ordinance which was ratified by parliament as the Statute of Labourers. The knights of the shire, the most influential section of the House of Commons, were themselves landowners with whom the landowners' point of view inevitably prevailed, though they had no intention of acting unjustly or in the interests of a class. The Statute ordained that food should be sold at the prices ruling before the coming of the Black Death, and that the labourer should work for the same wages. For infractions of the law both parties were to be penalised, those who demanded and those who paid more than legal wages and prices.

Further, the law which bound the villeins to the soil was to be enforced, and the labourer might on no account migrate from his manor to seek higher wages elsewhere. But if the landowners had the law behind them, the labourers were for the most part practically masters of the situation. The law was only partially successful in checking the high prices and the high wages. In the circumstances it was inevitable that many of the landowners should fall back upon any technical rights they possessed. In many cases the commutation of service for rent had been merely an act of grace; that is to say, it had not been secured by any proper legal bond. Landlords and their agents strained the technical point of law to claim unpaid service from the villeins.

It is quite superfluous to accuse either landlords or labourers of a monstrous reversion to an obsolete tyranny or of a monstrous attempt to take an immoral advantage of a national disaster. Both could easily convince themselves that reason and justice were all on their own side and not at all on the side of the other party.

Class hatred
A bitter class hatred sprang into being, which may well have been fostered by appalling tales brought back from France of the Jacquerie, the horrible sufferings of the French peasantry, and the horrible doings which attended their revolt and their suppression. Moreover the peasantry learnt a new antagonism to the existing social order from the consciousness that the greatest of the English victories had been won by men not of knightly rank but practically of their own class, the yeomanry from whom the archers of England were drawn.

Piers Plowman
It does not appear that the growing discontent and bitterness were due to any extreme destitution among the peasantry. William Langland, the writer of the great contemporary allegory, the Vision of Piers Plowman, paints an ugly enough picture of the doings of some of the lords of the manor and their agents; but there is no reason to suppose that such oppression and chicanery were more than occasional.

And, on the other hand, Langland does not spare the lash in describing the unthrift of the peasants, their self-indulgence, and their love of shirking legitimate toil. His indignation was begotten of the moral deficiencies which he saw in every class, and must be discounted, like the indignation of embittered moralists in all ages.

But the mere fact that the accustomed conditions of labour and of food production were hopelessly disorganised by the great pestilence, and were kept in a state of disorganisation by its occasional recrudescence, necessarily prevented the country from recovering its former sense of easy prosperity; while the moral atmosphere was made worse by the depression and disgust attending the later phases of the war with France. The soil thus prepared was eminently fitted for revolutionary doctrines to take root in.

New ideas
And revolutionary doctrines were in the air. Without any idea of stirring up the commonalty against the gentry, John Wiclif was playing a part not without its analogy to that of the French Encyclopaedists' before the French Revolution, four centuries later.

As a theologian he propounded the view that "Dominion is of Grace"; whereof the practical interpretation is that power is given by God for the furtherance of His glory, and those who use their power for other ends have no right to it; from which it again follows that power misused may lawfully be resisted and even forcibly taken away. As a Christian reformer of morals Wiclif preached self-denial and taught of human brotherhood. Such doctrines are easily translated into either Socialism or Anarchism.

Poll tax
Nor may it be forgotten that the villeins as a class had a real though not a new grievance in the rankling sense that they were not free men; that they were treated as servile and inferior to free men; that the process by which they had been gradually passing into the ranks of free men and escaping degrading conditions of tenure had met with an ominous check; that even those who were now technically free were in danger of falling back into a servile condition. Then to crown their grievances came the second poll-tax, which appeared as an intolerable and unjust burden upon the poor while it was comparatively unfelt by the rich.