Edward III and the Development of Trade 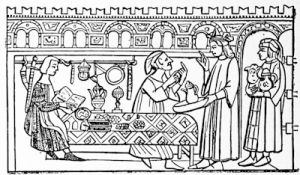 A goldsmith's shop in the 14th century

We have seen that until the reign of Edward III foreign commerce was extremely limited. Every borough and every district aimed at being self-sufficing; so also did the nation. The enterprising foreigner sought a market for his own goods in England and purchased raw materials from England; but the Englishman hardly attempted to seek a foreign market for his own goods or to procure from foreign countries goods which he could sell again at a profit at home. The wine and the cloths which he had not learnt to manufacture at home the foreigner would bring to his doors; and if the foreigner chose to bring his goods for sale, he must spend the purchase money in buying other goods from Englishmen.

Foreign trade
But the Englishman was now progressing beyond this passive attitude. He was beginning to produce with an eye to the foreign purchaser; even to exporting on his own account, instead of merely selling to the foreigner who came to buy. And because Englishmen were prospering they were also inclined to buy more of the goods which were only to be had from the foreigner.

It was realised that prosperity comes to those who seek a market. The Crown perceived that if energy were devoted to facilitating the expansion of trade, it could take its own toll at the same time without discouraging enterprise; and the more trade expanded the bigger the toll would be. Hence the value attaching to the commerce with Flanders and the commerce with his own Gascon dominions materially influenced Edward III in his French policy.

Wool trade
English wool growers and Gascon wine growers would flourish; and the more they flourished the more the royal exchequer would extract as the price of the privileges of exporting wool and importing wine. It followed that the king sought to strain to the utmost the royal prerogative of imposing customs nominally for the regulation of trade, and of bargaining with the merchants for their assent to such impositions without referring to parliament. And when parliament realised what was going on, parliament in turn insisted that its own assent was necessary to the imposition of customs. In spite of repeated efforts to evade the principle, Edward found himself obliged to give way.

The Crown's right to the "Ancient Customs" in accordance with the statute of 1275 was unchallenged; but it was established during the reign that other duties, even if they became habitual, required the assent of parliament for their imposition; and even if their renewal might be practically relied upon, it was on each occasion made only for a definite period.

The Merchants of the Staple
In the conditions of medieval society, both the expansion of trade and the collection of revenue were facilitated by the famous institution of the Merchants of the Staple. In modern times, laissez-faire doctrine condemns the regulation of commerce by the State on the ground that private enterprise is hampered thereby. When the State gives the individual protection against violence and fraud it has discharged its proper function. But in the middle ages the great danger to private enterprise was insecurity against violence and fraud. For security, State or municipal supervision was a necessity.

The export trade in English staple products, wool, wool-fells, hides, leather and some others, was made a monopoly of the merchants of the staple. Membership was open on the payment of fees, and was conditional only on the observance of the company's regulations; while the members traded severally on their own account - not after the fashion of a modern Joint Stock Company, in which the society does the trading and distributes the profits.

The trading was confined to specified towns connected with specified ports in England; and also to specified towns on the Continent, though ultimately the monopoly was given to Calais. It was thus possible to compel all traders to conform to definite regulations, and to provide security for the purchaser in respect of the bulk and quality of the goods purchased. At the same time the collection of the customs was very much simplified.

Edward is not to be credited with any anticipation of Free Trade doctrines as to the economic advantage of buying in the cheapest market; he probably looked very little beyond the opportunity presented of taking a toll for himself from the traders. The doctrine was fully accepted that money, a scarce and valuable commodity, should not be carried out of the kingdom in exchange for the goods brought in.

The foreigner in England could only trade as member of an association under strict regulation and supervision, at particular times and particular places; and he was obliged to buy goods to the value.of those he sold. But he was encouraged to sell as well as to buy; and the volume of trade and the amount of material wealth in the country increased rapidly.

Immigration encouraged
In one particular Edward appears to have been moved by more definite economic considerations. He encouraged foreigners to settle in England and carry on industries which had not taken a natural root in the country. From the foreigners in their midst the English learnt industrial arts which they had hitherto ignored; and during the fourteenth century the English became not merely wool-growers but manufacturers of the cloth which had hitherto been imported from the Low Countries. So much advance was made in this industry that regulations were made to limit or even prohibit the export of wool in order to keep down the price for the benefit of English cloth-makers. Before the end of the century English cloths were in full competition with those of Flanders.


His son Matthew was a popular poet and influential schools inspector

He was largely responsible for reforming public school standards of education