Elizabeth I and the Jesuits 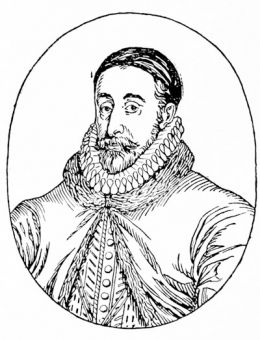 In the year 1578, Philip's lieutenant in the Netherlands was his half-brother Don John of Austria, who enjoyed a brilliant reputation as a soldier and was meditating grandiose schemes of his own which probably included his marriage with Mary Stuart. Elizabeth, as we have seen, had no real sympathy with William of Orange, since she hated and feared the doctrine that subjects might legitimately offer armed resistance to their lawful sovereign. But she could not afford to see the Provinces crushed, because Philip would then be left free to employ all his energies against England.

She did not want openly to take the part of the Provinces, but there was a possibility that France might do so out of antagonism to Philip, even although the King, Henry III, was suspected and feared by the Protestants as having been very deeply implicated in the massacre of St. Bartholomew. Now both Elizabeth and Burleigh in their hearts were more afraid of France than of Spain; not as matters actually stood, but if France should succeed in healing her internal discords and aggrandising herself at the expense of Spain.

Alencon proposals
Elizabeth therefore could not view with equanimity the prospect of Orange throwing himself completely upon French support and accepting a French protectorate. And yet she wanted to impose upon France the burden of supporting the Netherlands revolt. To this end in the year 1578 she revived the old business of negotiating for her own marriage with Francis of Alencon.

Alencon was more or less in alliance with the French Huguenots; in the event of a French protectorate the office of Protector would be conferred upon him; and Elizabeth hoped to keep him virtually under her own control by dangling before him the prospect of a marriage with herself. For five years she managed to keep up the farce, always evading the actual marriage, although more than once she seemed to have committed herself so far as to make withdrawal impossible.

Late in the year 1578 Don John died, and was succeeded as governor of the Netherlands by Alexander of Parma, the ablest soldier and one of the ablest statesmen of the age. Politically Parma succeeded in narrowing the issue in the Netherlands by detaching the Southern Catholics from the Northern Protestants; but by so doing be gave the struggle the definite character of a war waged by the United Provinces of the North for the preservation of their religious liberty.

The one thing certain was that those provinces would hold out to the last gasp. English volunteers fought for the Dutch in the Low Countries; England secretly supplied Orange with funds just sufficient to preserve from complete financial collapse; and Elizabeth kept Alencon in play. Such was the inglorious part which she chose to take in that glorious struggle.

Catholic plans
But England herself now became the object of attack; a papal attack which Philip of Spain fostered in the same sort of fashion as Elizabeth herself fostered Philip's enemies and encouraged the depredations of the English seamen. The agents of the attack were the Jesuits and the English Romanist zealots trained by Cardinal Allen in his seminary first at Douai and then at Rheims.

These were men who for the most part believed with on entire conviction that their first patriotic duty towards England was to bring her back to the Roman fold at whatever political cost. The attack was threefold. It was directed to the resuscitation in Scotland of a Catholic party, which should appeal to national sentiment by pressing the claim of the Stuart succession to the throne of England.

In Ireland it sought to raise insurrection; and in England itself it developed a vigorous Romanist propaganda, associated with the doctrine that Romanists were bound to do everything in their power to subvert the government of Elizabeth but were individually free to follow any course which might divert suspicions of disloyalty.

In Scotland the agent of the scheme was Esme Stuart, who captured the confidence of the young king by professing to have been converted to Protestantism by his superhuman dialectical skill. But though Esme Stuart was made Duke of Lennox and compassed the downfall and execution of Morton, there was no effective Romanist reaction; and Scotland was not attracted into hostility to the English government.

Irish uprising
In Ireland the flame was kindled by the Jesuit emissary Sandars, who arrived in the island as Papal Nuncio, and by Fitzmaurice, an exiled rebel who was Desmond's cousin. The murder of two English officers started the conflagration. Half Munster rose, and Desmond was drawn into assuming the leadership. Malby, the English president of Connaught, dashed into Munster, swept through it with fire and sword, and having, as he hoped, terrorised the province sufficiently, fell back into Connaught.

The moment he was gone Desmond again issued from his fortress of Ashketyn, and recovered the mastery of Munster. For some time the war took the shape of a series of savage raids and counter-raids, till Elizabeth was at last driven to provide sufficient supplies. But just as it seemed that the insurrection would be stamped out, the Catholics in the Pale itself rose, and a force of Italian and Spanish adventurers landed in the south-west at Smerwick. The Deputy himself, Lord Grey de Wilton, met with a disastrous defeat among the mountains of Wicklow.

The revival of the insurrection, however, was brief. There was no organisation among the insurgents. In the late autumn Grey marched to the south and laid siege to Smerwick, supported by a squadron of English ships which had been despatched to his assistance. Smerwick was forced to surrender at discretion and the garrison were put to the sword. Its fall was practically decisive; a desultory struggle was still maintained, the English hanging and slaying ruthlessly wherever they met with resistance, while the Irish slaughtered the English whenever an opportunity occurred.

A couple of years passed before the smoulderings of revolt were completely stamped out, but the Irish leaders had learnt that they were not strong enough to fight the English unaided and that active aid from Philip would not be forthcoming. He was willing to use them as catspaws, but would not commit himself on their behalf.

In England the papal mission was in the charge of Parsons and Campian. Campian was a single-minded enthusiast, ready for martyrdom in the holy cause of the Redemption of England; a man with­out guile and with no suspicion of the sinister purposes of which his own simplicity and enthusiasm were being made the in­struments. It was his business to inspire religious zeal; it was that of his colleague to adapt that work to political ends — in other words, to foster treason. The country was flooded with Jesuit emissaries of both types.

Walsingham against the Jesuits
But they found their match in the Secretary Francis Walsingham, who for some twenty years counteracted every conspiracy and plot that was concocted by a consummate system of espionage. Invariably at the critical moment Walsingham's hand fell. His methods were unscrupulous. His own hands were clean. He was absolutely incorruptible, absolutely devoted to the cause of his country and of Protestantism. He was the one minister who never hesitated to speak his mind to Elizabeth, the one man of whom she herself was afraid.

But if his own hands were clean, he had no hesitation in employing the basest instruments and leaving them to employ the basest means in his warfare with enemies who, in his belief, could be fought effectively only with their own weapons.

Walsingham was mainly responsible for the employment in England of torture, not as a form of punishment, but in order to extract evidence from reluctant witnesses. In his excuse it can only be urged that torture was universally employed outside of England, and was universally condoned by public opinion. It was now freely employed against the Jesuits, who displayed the same admirable constancy which is habitually shown by the martyrs of religious enthusiasm, whatever their creed. Campian himself was one of the victims whose sufferings and death really furthered, instead of injuring, the cause for which they died.

Catholicism as treason
But the cause against which Walsingham was fighting was ruined by the attendant disclosures, in spite of the aid it received from the blood of its martyrs. More than ever in the eyes of the public at large, as well as of statesmen, Romanism was identified with treason, and the Jesuit mission drove the parliament of 1581 to impose new penal laws upon the Catholics.

Those who had remained loyal to the old faith were heavily penalised for celebrating the Roman Mass and for non-attendance at Anglican services. It was made treason to become a convert, or to attempt to make converts, to Rome. The lives of Catholics were made a burden to them, and the burden was not removed for generations.

In 1583 the Alencon farce came to an end. That contemptible prince entered on his own account upon a plot for the betrayal of the Netherlanders which was discovered and frustrated. From that moment his political career was at an end, and he vanished from the political stage on which he had played so prominent and so despicable a part. In the following year he died.