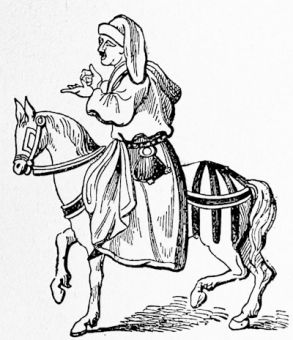 Wat Tyler
According to tradition an accidental spark fired the flame. A collector of the unpopular tax insulted the daughter of a peasant, Wat Tyler, who struck him down. Other peasants gathered to support their comrade, and on a sudden all Kent was up in arms, the counties north-east of London following suit. From Kent on the south, from Norfolk, Suffolk, Essex, and Hertfordshire on the north, the gathering bands of insurgents marched on the capital.

We saw further that by the reign of Henry II the bulk of these occupiers holding by service had become serfs bound to the soil, this whole class bearing the general name of villeins; among whom were not generally included those who paid rent but not service, nor all of those who paid service. With the enforcement of the habit of law and order which characterised the Plantagenet rule, the condition of the villeins steadily improved. They were permitted to commute service for rent, though this did not free them from the technical status of serfdom; and it followed that the old forced services were largely replaced by labour for which wages were paid.

In many localities actual incidents of villeinage, legal rights of a lord — the "lord" being often a monastery - legal wrongs of villeins, were the motive of the outbreak; there was much clamouring against the name of serf, and the most general demand was that for the right to occupy land at what the peasants regarded as a reasonable rent.

The prominence of these facts has obscured another; namely, that the rural population of Kent were not villeins at all but free men not holding by servile tenure; while the eastern counties with their large Danish element were notoriously those in which there was the largest proportion of free tenants. Although the insurrection spread sporadically to other districts, those in which villeinage was most universal were the least conspicuously disturbed.

Contem­porary annalists declare that the Kentish leader who also bore the name of Wat Tyler was meditating a political and social programme of an exceedingly advanced type, aimed not at the destruction of the monarchy but at a very democratic control of the government; in which there was no room for baronage, gentry, lawyers, and prelates.

John Ball
One of its most fervent prophets was the fanatical and entirely honest priest, John Ball, who to-day would undoubtedly have called himself a Christian Socialist. It is therefore a tenable proposition that the revolt was organised and engineered by real democratic revolutionaries, with whom the mere grievances of villeins as such were a secondary consideration, utilised as means to a more important end.

The Londoners opened their gates to the Kentish insurgents; more than half of those who were afterwards listed as ringleaders were Londoners; facts which again suggest that the grievances of villeins as such were not at the root of the matter. Masses of the Essex insurgents were already encamped outside the city on the northern side.

The young king and some of the Council were at the Tower; but both they and the city authorities appear to have been paralysed, and although nearly a fortnight had elapsed since the first out­break, no defensive measure had been taken. Both the great bodies of insurgents pillaged the houses of particularly obnoxious persons and killed a few obnoxious individuals; but their leaders had other objects than immediate pillage, and on the whole kept their men in hand.

When Tyler and his following entered London, they wrecked John of Gaunt's palace of the Savoy and the houses of others who were especially unpopular, besides breaking open and burning the Fleet Prison and Newgate; but they refrained from looting.

The king gives way
Richard from the Tower gave out that he would meet the insurgent leaders at a conference at Mile-end. He fulfilled his promise, and in effect conceded all the demands which the insurgent leaders formulated. Villein­age and feudal services were to be abolished, and there was to be a general amnesty, though the king would not pledge himself to punish those whom the insurgents stigmatised as traitors.

But while the conference was going on there was an outbreak of violence on the part of those who had remained in the city, in the course of which Archbishop Sudbury and Hales the Treasurer were both murdered. It is noteworthy that much of the popular resentment was directed against the aliens, represented by the colony of Flemings.

Royal pardons
On the same day the king issued a number of the promised pardons, and many of the insurgents began to disperse. Many thousands, however, still remained with the leaders, who were by no means satisfied with the concessions already made. During the night and the next morning there were further scenes of violence, and the king announced that he would again meet the leaders at Smithfield.

The boy of fourteen was no coward, and probably enjoyed the theatrical character if not the actual danger of the proceedings. With an escort of two hundred men in civil array he rode to Smithfield, where the masses of the insurgents were drawn up. Tyler rode out to meet him - insolently enough, it may be presumed. He had a new list of grievances which must be remedied.

Tyler's murder
The accounts vary as to the details of what then occurred; but it must be remembered that every one of them was written from a point of view vehemently hostile to Tyler. It is agreed, however, that Tyler, for whatever cause, laid hand on his dagger, and the movement was interpreted as a threat to the king's person. Wal­worth, the Mayor of London, who was riding by the king, drew upon Tyler and cut him down.

Royal courage
The cry rang down the ranks of the peasants,"Treason! They have slain our captain!" Bows were bent; it seemed certain that the whole of the king's company would be overwhelmed and slaughtered by the enraged insurgents. But the boy's courage and presence of mind saved the situation. Setting spurs to his horse, before anyone could stop him he dashed forward alone across the open space towards the rebel ranks.

"Will you shoot your king?" he called."I will be your captain and leader. Follow me." His horse paced slowly towards the open fields to the north. Bows were unbent. Astonished and fascinated, the great array followed, the king's retinue hurrying to join them. But the mayor slipped back to the city and called every loyal citizen to arms. The promptitude with which the appeal was answered seems to prove that the orderly element had only been waiting for a leader to assert itself. So quickly was powerful force collected that when it arrived on the scene the king was still holding the insurgents in parley.

With the troop now at his back the king's person was safe; the insur­gents recognised that the fighting odds were no longer in their favour Richard proclaimed that they all had leave to depart and disperse to their homes; and they took him at his word. The boy king, and he alone, had won a purely personal triumph, from which men were warranted in auguring great things for the Black Prince's son.

Promises broken
But the promises Richard had made he probably never intended to fulfil; nor was it in his power to carry them out save by assent of the Estates. The insurgents had scarcely dispersed, the writing on the promised pardons and charters was scarcely dry, when the king repudiated his pro­mises in most unmistakable terms. Apart, however, from people killed in actual riots, or in conflicts between armed hands of insurgents and loyal­ists, or as a consequence of such conflicts, it does not seem that many more than a hundred persons were actually put to death.

Parliament met in the winter, and emphatically endorsed Richard's repudiation of his promises. Those promises, they said, were invalid and illegal until confirmed by parliament, and parliament absolutely refused to confirm them. No concessions whatever were made in favour of the peasants.

Consequences of the Revolt
It has often been maintained that, although the revolt was crushed, the peasant rising actually brought victory to the peasants' cause. As a matter of historical fact this does not seem to have been the case. Down to the time of the Black Death a natural movement had been m progress, tending towards the gradual disappearance of serfdom through the substitution of rent and wages for forced services; a process which under normal condi­tions was proving advantageous to lords and to villeins alike.

The natural process was checked by a cataclysm; the Black Death made the conditions abnormal, and of those abnormal conditions the revolt was the last start-ling phase. It accomplished nothing whatever; but after it was all over and there was no recurrence of the pestilence, the economic conditions reverted practically to what they had been before the Black Death; and as they again became normal, the old causes again operated and the old natural process of liberation naturally revived.

Prices fell; the wage labourer was consequently content with a lower money wage; and again the employer found that a money rent and voluntary paid labour paid him better than forced labour and tenure by service. Hence in the course of the next half century villeinage did practically disappear, forced service became a merely local survival, and the villein became a tenant paying a small fixed rent with security of tenure.

The security of tenure had always been his, since the lord had no power to eject the villein from his holding so long as he rendered the recognised services; and the recognised services were now commuted for a recognised rent, which left the tenant the same security. As a democratic movement the revolt led to nothing; and the parlia­ments remained, as before, representative of the landed and commercial interests.