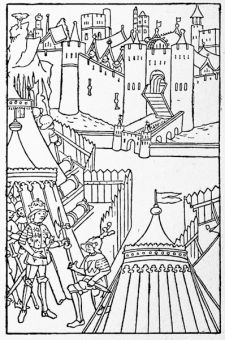 The siege of Rouen by Henry V

Almost two years had passed [after Agincourt] before Henry was ready for his second invasion. The first had taught him the magnitude of his task; and the fame he had won at Agincourt made anything more in the shape of fool­hardy feats of arms entirely superfluous. This time conquest was to be systematic and thorough.

Meanwhile two French Dauphins had died, and a third brother, Charles, now heir to the French throne, was as completely in the hands of the Armagnacs, as the Orleanists were now termed, as his predecessors. Orleans himself was one of the comparatively few prisoners whose lives had been preserved at Agincourt. Burgundy's neutrality at least could be relied on, and he was in fact at open war with the Armagnac government.

When Henry landed again in Normandy there was no present prospect that the army of France would interfere with him. What he had to do was to subdue Normandy. He set about the conquest city by city. He kept his troops under a discipline almost without parallel in medieval warfare, and punished anything in the shape of outrages on the civil population with a heavy hand. In a couple of months half the towns of Normandy had surrendered, and the French queen had joined Burgundy, claiming the regency for her­self in priority to the Dauphin, whom she detested. The conquest of Normandy continued, and while Henry garrisoned town after town he made no infringement on their accustomed liberties or rights.

Rouen
In the summer he began the siege of Rouen, the capital of the duchy. Summer waned, the autumn advanced, and passed into winter; the warring factions of France both endeavoured to negotiate, and while they negotiated Rouen was drawing nearer to the starvation point. The only attempt at relief was a raid easily beaten off. The inhabitants of Rouen drove some thousands of non-combatants out of their gates. Henry refused to let them through his lines, and the merciless business of starvation went on, relieved only when the English king provided the miserable people with a Christmas dinner. In January Rouen surrendered, and after that the rest of Normandy gave little serious trouble, though there remained fortresses which still held out for some months.

Burgundy renewed negotiations, but the more that he and the queen seemed inclined to concede, the higher grew the terms demanded by Henry. At last Burgundy resolved to have done with it and to make his peace with the Armagnacs. There was an apparent reconciliation between Burgundy and Charles; but immediately afterwards the Duke was foully murdered by the treachery of the Dauphin at Montereau.

In his young successor Philip, and indeed among all the Burgundians, the desire for revenge mastered every other sentiment. They immediately concluded for their own part a truce with the King of England so far as all Burgundian territories were affected. The queen was on their side, the crazy king and the princess Catherine were both in their bands.

The Treaty of Troyes
In the spring of next year, 1420, they concluded with Henry the treaty of Troyes, under which he received Catherine as his bride, the guardianship of the kingdom during the life of the reigning King Charles VI., and the promise of the succession for himself and his heirs after the king's death, to the displacement of the Dauphin. France was to retain her own laws, customs, and government; there was merely to be an ultimate union of crowns like that which took place between England and Scotland, not in 1707, but in 1603.

A few months later Henry withdrew to England, leaving in charge his next brother, Thomas, Duke of Clarence. His long absence was being felt at home. Nevertheless he was back in six months again; for Clarence by a rash movement brought upon himself an overwhelming defeat and lost his own life at the battle of Bauge, a victory mainly won by a large contingent of Scots who had taken service with the French.

Henry V's Death
New life was given to the party of the Dauphin; through the latter part of the year and the first half of the following year, 1422, Henry was engaged in pushing forward his conquest. In the meantime Catherine had borne him a son. He himself was a young man not yet five and thirty, and it is impossible to guess what he might have effected if he had lived another twenty years in fall vigour. But the hand of death was upon him. He contracted a fatal disease, of which he died in August of the same year, leaving instructions that his next brother, John, Duke of Bedford, should act as a regent of France, and his younger brother, Humphrey of Gloucester, as regent of England.