The Regency of Henry VI 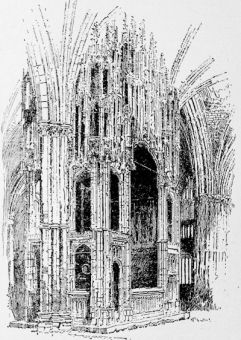 The war dragged on [after the death of Joan of Arc], but it was now one not for the conquest of new territory by the English, but for the recovery of conquered territory by the French. The French offer was renewed in 1439, but England still refused to resign Henry's claim to call himself King of France.

Attack on Guienne
The French began to attack Guienne, which had been for a long time in peaceful occupation, free from attack because the French forces had been too thoroughly engaged elsewhere. Guienne, it must be remembered, was not a conquered territory, but had always been technically subject to the King of England as its Duke. But before proceeding further with the story of the loss of France, we must turn back to affairs in England.

Of the three brothers of Henry V, the eldest, Thomas of Clarence, was killed at Bauge. The dying king had desired that the active work of establishing the English, crown in France should be entrusted to his next brother, John of Bedford, while the third, Humphrey of Gloucester, was to be regent in England.

The Beaufort Regency
The infant Henry VI was to be placed in the care of the Beauforts. The Beauforts were the nearest kin of the house of Lancaster. They were the illegitimate children of John of Gaunt, who, however, ultimately married their mother, Catherine Swinford, and the Beauforts were legitimised by Act of parliament in the reign of Richard II; an Act which was confirmed in the reign of Henry IV, but with the addition of a clause which barred them from the succession to the crown.

The point is of importance, because it still remained possible for the Beauforts to maintain a sort of claim to represent the house of Lancaster on the failure of direct heirs to Henry IV.

The Beaufort brothers
There were three brothers: Henry, Bishop of Winchester, who became a Cardinal; Thomas of Exeter; and John, Earl of Somerset, from whom descended the other representatives of the name. Henry of Winchester was a prominent member of the Council—a rival of Archbishop Arundel, and an ally of the Prince of Wales during the reign of Henry IV. He became Chancellor under Henry V, and remained in the front rank of English politics until shortly before his death in 1447.

Thomas of Exeter was made the actual guardian of the infant king, but he died shortly afterwards. John of Somerset was never personally prominent. His daughter Joan was married to young King James of Scotland, who was liberated and allowed to return to his kingdom immediately after the death of Henry V. Her two brothers, John and Edmund, became successively the Earl and Duke of Somerset; each left a daughter named Margaret. John's daughter became the mother of Henry VIII, while Edmund's daughter was the mother of the Duke of Buckingham, who appears first as the ally and the as the foe of Richard III.

But the Beauforts who appear prominently in the reign of Henry VI are the Cardinal Henry and his nephew Edmund. The wishes of Henry V had of course no legal force; the parliament had every confidence in Bedford, and conferred upon him the powers desired by the dying king. It declined, however, to make Humphrey of Gloucester regent in England - Bedford's supremacy was to be recognised whenever he was in the country - though it made him president of the Council to which the regency was committed.

This was the continuation of that standing Council which had been nominated in the reign of Henry IV that it might act as a constitutional check on the powers of the Crown, though it was destined to become instead the king's privy council of his own nominees. For the present, however, it provided in effect the government of Eng­land.

There was no thought of challenging the succession. The Earl of March was above suspicion of any disloyalty. Still, at the instance of Gloucester, he was sent off to take up the government of Ireland, where he died shortly afterwards. The Mortimer heritage and claim to the Crown passed to his nephew, Richard Plantagenet, the son of his sister, Anne Mortimer, and of Richard, Earl of Cam­bridge.

The child had already become Duke of York by the death of his uncle Edward at Agincourt, he being one of the two English noble­men who fell in that wonderful battle. Richard of York was eleven years old when the king died.

Domestic politics produced no events of importance. On the whole Gloucester dominated the government, while there was no love lost between him and the Beauforts. When Bedford died, the young Duke of York was sent to take his place in France, and acquitted himself with very considerable credit. But by this time, if not before, Cardinal Beaufort had become anxious to bring the war to an honourable conclusion, having realised the futility of its continuation; whereas Gloucester courted popu­larity by heading the extreme war party who were responsible for the rejections of the French overtures which we have noted.

He was, however, practically driven out of public life for a time by the conduct of his wife, Eleanor Cobham, for whom he had deserted Jacquelaine of Hainault. The lady had apparently "practised against" the life of the young king by necromantic arts, which, however silly, had obviously a treasonable intent, Gloucester himself being the heir-presumptive to the throne.

The actual necromancers were put to death, and the Duchess had to parade London robed in the white sheet of repentance. Duke Humphrey was not actually an accomplice, but the affair drove him into retirement for some while. Although the obstinacy of public sentiment persisted in continuing the war, its management and the control of public affairs passed to the Beauforts.

The conduct of war by a ministry who were more anxious for peace than for victory was scarcely promising. The fighting was ineffective, and efforts were made to negotiate peace, even at the cost of resigning the titular claim to the French crown. With a view to peace, a marriage was negotiated between the young king Henry VI and Margaret of Anjou, the niece of the French king.

Royal marriage
The mismanagement of the English envoy, William de la Pole, Earl of Suffolk, an ally of the Beauforts, resulted in a betrothal and a truce, but nothing more. The tables were turned now, and every English proffer of terms was met by a raising of the terms on the part of the French. The royal marriage was celebrated in 1446, and in the next year both Gloucester and Cardinal Beaufort died.

Gloucester's murder
There is very little doubt that Gloucester was in fact murdered by Somerset and Suffolk — a foolish as well as a criminal performance, in which the Cardinal at least, being practically in retirement, could have had no hand. So long as Henry VI should be childless, Richard of York was now manifestly the next prince of the blood.

While the truce lasted, shuffling negotiations went on with France, and there was intense disgust when it became known that Suffolk had promised to evacuate the province of Maine. Still greater was the wrath when in 1449 the French renewed the war by invading Normandy in force, and overrunning it almost unresisted. Somerset was sent to take command but in the spring of next year his forces were overwhelmed at the battle of Formigny. Before the autumn of 1450 nothing remained in France to the English except Guienne and the Calais Pale.

Long before the disaster of Formigny, even before Somerset's ex­pedition sailed, popular indignation had risen to rioting point. Somerset had hardly landed in France when an angry attack was made by the House of Commons on the administration in general and Suffolk in particular. All sorts of charges were hurled against him, some serious and some absurd, some demonstrably false. Instead of facing trial, Suffolk threw himself on the king's mercy.

Suffolk's Fall
The amiable imbecile on the throne — he was the grandson of Charles VI of France if he was also the son of Henry V of England — thought merely of protecting Suffolk, and attempted to do so by banishing him from the kingdom for five years. Again a storm of popular indignation broke out. Suffolk fled for his life in disguise, but was caught and murdered while trying to cross the Channel. The news of Formigny had just arrived, and the murder was merely a symptom of popular rage.

Jack Cade's Rebellion
A month later it took shape in the insurrection known as Jack Cade's Rebellion, which the tradition followed by Shakespeare has hopelessly mixed up with the Peasant Revolt seventy years earlier. In 1450 the complaints formulated by the rebels were all directed against the sins of the Suffolk-Somerset administration. A casual demand for the repeal of the Statute of Labourers was the only reference to social questions, and was merely intended to attract the mob.

The moving spirit, Jack Cade, whatever his real name may have been, was undoubtedly an adventurer possessed of considerable education and some military experience. But the insurrection was one of the common folk, and therein lay its one difference at the outset from the risings of the baronage in arms which were the traditional method of dealing with constitutional crises.

End of the revolt
When the king's forces were called out to disperse the insurgents, they were promptly disbanded again for fear of mutiny. But in other respects the precedents of Tyler's Rebellion were followed. Jack Cade kept his men in hand until they got into London. Then there came a riot which turned the friends of order into the enemies of insurrection; Jack Cade disbanded his forces on promise of pardon, and the pardon was then repudiated. Cade fled, but was caught and killed.

The victory of the government brought over Richard of York from Ireland, whither he had been sent as lieutenant, for some time past, to keep him out of the way. Jack Cade had made use of his name, a fact which aroused some suspicions that he himself had set the insurrection on foot to test public opinion. He was now determined both to dis­sociate himself from the rebellion, and as next prince of the blood to take the lead in demanding the removal of "the king's evil counsellors."

His arrival on the scene meant that the rival parties must now measure their strength together; on the one side Somerset and the queen, carrying with them the king, and on the other side the heir-presumptive and all who were hostile to a government which had proved itself hopelessly incompetent.