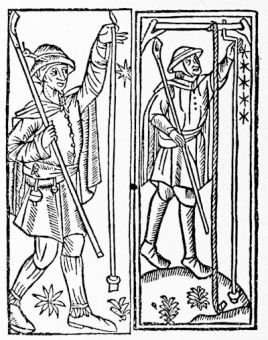 Ireland claimed its share of attention from the new monarchy. In the old days it had been an outlying dominion of the Crown, practically remote from England, and playing no part in England itself. Since the failure of Edward Bruce to convert it into a kingdom for himself, it had been difficult enough to provide Ireland with any semblance of a government; but sheer incapacity for co-operation on the part of its chiefs, whether Celts or Normans, destroyed any prospect of its seeking to achieve independence.

Within the Pale, English law and institutions modelled on those of England prevailed. Outside the Pale, the Fitzgeralds or Geraldines of Kildare and Desmond, the Butlers of Ormond, and the Burkes who had been De Burghs, went their own way in the south and west, while MacNeills, O'Donnells and O'Connors did likewise in the north. Edward III. had sent his son Lionel of Clarence as Lieutenant - his rule was signalised by the Statute of Kilkenny, a desperate attempt to stop the process by which the Normans were becoming increasingly Celticised.

The fusion of the races by intermarriage, and the adoption, of Celtic customs and language, were prohibited on the hypothesis that the Irish were an 'inferior and incurably barbarian people'; nevertheless, things went on very much as before.

No English king except Richard II visited Ireland in person. Richard of York, his uncle Edmund Mortimer, and his grandfather Roger, all served as Lieutenants of Ireland, whither they were sent in part at least to keep them out of the way. But all had made themselves popular, with the result that, in the War of the Roses, Ireland provided a safe refuge, for Yorkists and a base for Yorkist pretenders in the reign of Henry VII; although the rivalry between Geraldines and Butlers kept the house of Ormond on the Lancastrian side. By this time the post of Lieutenant had become an honorary one. Prince Henry, afterwards Henry VIII, was named Lieutenant at the age of three. But the functions were discharged by a Deputy.

The Deputy appointed by Edward IV had been the great Earl of Kildare, Gerald Fitzgerald, whose relations with Henry VII were unique. The ablest as well as the most powerful of the Irish lords, he was a man who could? himself rule but had no idea of being ruled by anybody else. The King of England thoroughly appreciated his qualities, and despite his turbulence and insubordination, even his notorious complicity in rebellion, retained, him. in the office of Deputy except when some peculiarly outrageous proceeding, necessitated his temporary removal. Henry's attitude is exemplified in an anecdote. " All Ireland," complained a victimised bishop, "cannot rule this man." "Then," quoth the king, "I see this man must rule all Ireland?.”

Sir Edward Poynings
But in one of the intervals when Kildare was deposed, Henry found an efficient English Deputy in the person of Sir Edward Poynings, a good soldier and an able administrator, who in his brief term of office established the foundations of a permanent organised government by Poyning's Law, which remained its basis for nearly 300 years.

In England, according to existing practice, legislation was initiated by the ministers of the Crown, though it might be on the petition of the commons, and though it required the assent of parliament. Theoretically the system under Poynings' Law did not greatly deviate for Ireland from this practice but the effect was very different.

The Irish parliament did not on its own ac­count pass Bills which were sent up for the royal assent; it could only accept or reject without modification Bills which were shaped by the King in Council in England. Since the King's Council looked upon Irish affairs with English eyes, this meant practically that Irish legislation was controlled by English ideas, which were not less pronounced because they were formed in almost total ignorance of Irish conditions.

But the great problem for Ireland was not that of legislation but of efficient administration. On the whole, Henry himself aimed at the principle of endeavouring to induce the Irish magnates to range themselves on the side of law and order and centralised government; a policy to which the only alternative was the establishnent of a military government emphatically and manifestly capable of enforcing law and order by the strong hand.

It was unfortunate that the Tudor governments perpetually vacillated between these two policies, and while they generally leaned to the latter, persistently refused to provide the Deputies with sufficient military force to give it effect.

This Danish king was followed by Edward the Confessor


His predecessor was Harold I