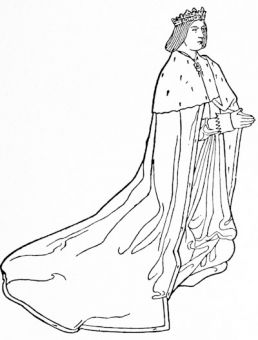 We left James III of Scotland at the moment when he had triumphed over the baronial factions headed by his brother the Duke of Albany. James, however, lacked the capacity for securing his position. Precisely how or why the new antagonism was aroused is not very clear; but in 1488 there was a new "band" among the most powerful of the nobles, headed by Angus, popularly known as Archibald Bell-the-Cat be­cause he had announced his intention of "belling the cat" in accordance with the well-known fable.

Sauchie Burn
In the face of this combination James himself withdrew to the North, where he was sure of support. The insurgents, however, captured the person of Prince James, the heir-apparent, who allowed himself to be used as a figurehead, he being then a boy of fourteen. Angus in the past had held treasonable correspondence with England, though the insurgents now made anglicising tendencies one of their charges against King James. A battle was fought at Sauchie Burn, not far from Stirling, where the royalist force was routed. The king escaped from the field only to be murdered on the same day, though the actual murderer remained unknown.

Young James was at once proclaimed king. His father's death prevented his title from being challenged, while the manner of it imposed upon the Lords the need of a particularly careful display of constitutionalism.

The result was that the newly constituted government abstained from violence, and could fairly claim credit for devoting itself to the general establishment of order. It was not long before the young king showed himself capable of assuming the reins of government. He was a prince of brilliant accomplishments, mentally and physically vigorous, romantic and chivalrous of temperament, alive to the duties of a ruler, but dangerously impulsive. For twenty years Scotland advanced under his rule, and became a flourishing and orderly State not wholly negligible in European politics.

That James was a strong king is sufficiently demonstrated by the absence of any of those great contests with baronial factions in which each of his three predecessors had been involved. Before he was twenty years old it is true that there were troubles, and that Angus again entered into treasonable relations with the King of England. But there was no recurrence of these alarms. The one serious internal conflict which occupied Scotland was that with the Lords of the Isles, the ancient feud of the Western Celts with the supremacy of the Crown.

In this con­test James was completely successful, and during the latter part of his reign secured not only the submission but the loyalty of the chieftains of the west. The relations of James with Eng­land were habitually what is called strained. Border raids and piratical encounters at sea provided an eternal cause of complaints and counter-complaints.

We have seen James espousing the cause of Perkin Warbeck and finally settling down into comparatively friendly relations with Henry VII, who never wanted to quarrel with him. But even after his marriage with Margaret Tudor there were occasions when only a skilful diplomacy averted war between the two nations.

In the different phases of his relations with Henry VII. James did not show himself a particularly far-sighted politician, but he did prove himself an efficient ruler. Similarly he proved his natural soundness and efficiency by great improvements in the administration of justice, and by careful endeavours to foster Scottish commerce. He too was moved by the educational spirit which was abroad, and insisted upon the education of his subjects at grammar schools, besides establishing a new university at Aberdeen and introducing the printing press.

Most notable also was his seal for the creation of a navy, a project to which Robert the Bruce had devoted attention and energy, but which had remained in abeyance since his day. If James had died before the battle of Flodden was fought, if he had not given way to the fatal impulse which brought about that great national disaster, he would probably have been remembered by posterity as the greatest royal benefactor of Scotland since the days of Bruce. But on that fatal field half his work was undone. That, however, is a story which belongs to our next chapter.