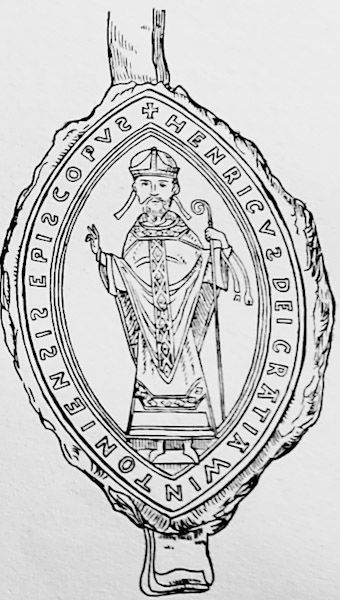 Seal of Henry, Bishop of Winchester, brother of King Stephen

Stephen moves fast
Henry died in Normandy. With all his shrewdness and anxiety to secure the succession to his daughter he had omitted to take the somewhat obvious step of making sure that she should be present in England at the time of his death, though he knew well enough that her succession would be unpopular with every class of his subjects.

Perhaps the one time in his life when Stephen of Boulogne showed signs of intelligence was when he hurried over to England to capture the support of the great officers of state and the clergy in claiming the inheritance.

The great bulk of the barons, who assumed that the election of a king would remain with them, were in Normandy. After due deliberation they offered the dukedom and the crown to Theobald of Blois, while Geoffrey of Anjou, who cared much, more about Normandy than about England, was collecting a force on the Maine frontier in order to make good his own claims.

The election of Theobald was interrupted by the arrival of a messenger, who announced that his younger brother Stephen had already been elected and crowned by the English Witan. The cautious and unambitious Theobald accepted the situation and refused to stand in his brother's way.

Anarchy
Stephen, however, was no sooner crowned than his inefficiency became obvious. A very valiant knight in single combat or against any odds, he had no vices and no brains, lacking the most elementary notions whether of strategy, of diplomacy, or of statesmanship. Therefore, from the very outset all over the country every man began doing that which may have been right in his own eyes but was very seldom so in the sight of any one else.

Robert, Earl of Gloucester, the Empress Maud's illegitimate brother, was very soon plotting to place her on the throne. David of Scotland, who as Earl of Huntingdon, had sworn allegiance to her, demanded as the price of peace the succession to the earldom of Northumberland for his own son Henry, basing the claim on the fact that his own wife was the daughter of Waltheof.

The Battle of the Standard
In 1138 the country was ablaze with miscellaneous insurrections, more particularly in the west country. In that year David, whose demands had not been satisfied, having already harried the border, led a considerable host of invaders across the Tweed, and advanced over the Tees.

A Scottish incursion was more than the Yorkshiremen would endure, and the stout old Archbishop Thurstan got together a considerable force to meet them, who marched out with sundry sacred banners at their head, which gave their name to the Battle of the Standard fought at Northallerton.

It is curious to note that the Englishmen, instead of employing the usually successful cavalry tactics of the day, dismounted and fought as heavy infantry; also that they fought having clumps of archers intermixed with them, which looks very much like a foretaste of tactics applied nearly a hundred and fifty years afterwards in the Welsh wars of Edward I. and developed in the French campaigns of Edward III.

At any rate the Scots, though in superior numbers met with an overwhelming defeat, due largely to the slaughter inflicted by the archers. Nevertheless the victory led to nothing beyond the immediate expulsion of the invaders; and very soon afterwards David made peace with Stephen on terms rather better for himself than he had demanded before the invasion.

Stephen himself proceeded to quarrel with the ecclesiastical party, including his own brother Henry, Bishop of Winchester who had the Pope at his back since he was himself authorised papal legate. Nothing could better have suited the empress and her party, who at this juncture succeeded in landing in England. The king on the one side and the empress, on the other began to purchase support by lavishing rights and privileges, lands, and titles on every one who asked for them.

With the exception of Robert of Gloucester, whose interests were bound up with those of his sister, no one could be relied upon to remain on one side or other for any continuous period; the civil war was not so much a battle of parties as a welter of private wars.

Says the English Chronicler: "Every powerful man made his castles and held them against him; and they filled the land full of castles. They cruelly oppressed the wretched men of the land with castle works. When the castles were made they filled them with devils and evil men. Then they took those men they imagined had any property, both by night and by day, peasant men and women, and put them in prison for their gold and silver, and tortured them with unutterable torture; never were martyrs so tortured as they were.... They laid imposts on the towns continually and called it tensert'e; when the wretched men had no more to give they robbed and burned all the towns, so that thou mightest well go all a day's journey, and thou shouldst never find a man sitting in a town [that is township or village] or the land tilled." So goes on the hideous record of rank unbridled violence "till men said openly that Christ and His saints slept."

Progress of the war
Stephen himself was taken prisoner in a battle at Lincoln early in 1141. His cause seemed to have collapsed, and Maud was elected "Lady of England." She in her turn at once, by her arrogance and violence and her total disregard of the advice of both Gloucester and the king of Scots, aroused such a spirit of resentment that within the year she was herself a fugitive and her brother of Gloucester was a prisoner.

Then Stephen and Gloucester were exchanged, and in a few weeks half the country had again acknowledged Stephen. It is scarcely profitable to pursue the ups and downs of the fighting. Gloucester's death in 1147 threatened to ruin the Angevin cause; it was, perhaps, saved by the death four years afterwards of Count Geoffrey, whose son Henry, then eighteen years old, was not long in proving himself a youth of extraordinary capacity, vigour, and intelligence.

So far as concerned the fight between Stephen and Maud herself, it had been practically won when the empress retreated from England after Robert of Gloucester's death. But the succession was another matter. Stephen's one desire was to secure it for his son Eustace; but he had finally succeeded in driving the clergy solidly over to the Angevin side.

Settlement
In 1153 young Henry landed with a small enough force, but one which sufficiently enabled him to display his qualities of leadership. The tide of favour seemed suddenly to turn; Eustace was unpopular, and the barons began to come in to Henry. The death of Eustace made Stephen careless for the future.

Theobald, Archbishop of Canterbury, intervened to negotiate between the rivals, and terms were agreed upon at Wallingford, Stephen was to remain upon the throne, but Henry was to succeed him, and was to be in some sort associated with him in the government of the kingdom; and in the meantime Stephen, with Henry's support, was to set about the ejection of the mercenaries or free-lances, who had been employed in large numbers by both sides throughout the struggle, and the destruction of the many hundreds of unlicensed castles which had sprung up all over the country.

Henry, in fact; left Stephen to carry out these stipulations by himself; but only a year remained to him for the fulfillemt of his undertakings. The something that was done was done with characteristic inefficiency, and the country only began to breathe freely when Stephen died to make room for a man who, whatever his faults or merits, was nothing if not efficient.

<< The Reign of Henry I - King Stephen - Alexander I of Scotland >>