The Reign of Henry I 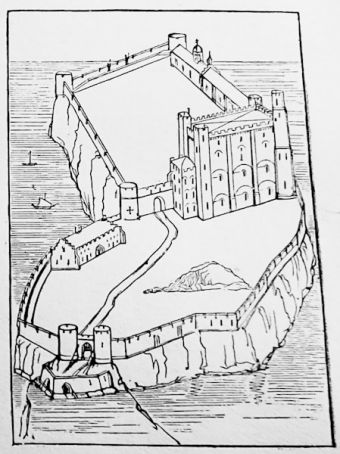 Ideal plan of a Norman castle

In one aspect of his reign, then, a vast amount of Henry's time was taken up with the wars and the diplomacy which first established him on the throne of England, then secured his grip on Normandy and Brittany, and finally was intended to secure the English succession to his daughter. We can now give brief attention to his relations with the Church.

The Church
One of his first acts was the recall of Anselm with whom he was on friendly terms to the end of the archbishop's life. Nevertheless there was no such co­operation between Anselm and the king as there had been between Lanfranc and the Conqueror. Though Lanfranc was a great ecclesiastic, he had supported William in his determination to surrender no tittle of the independence hitherto enjoyed by the kings of England.

But Anselm owed allegiance first to the Pope. In the last years of the Red King a papal decree had claimed new authority, and that claim Anselm felt bound to support so long as it was maintained by the Pope himself.

Henry, however, was as definite as the Conqueror himself in his refusal to surrender rights which the Conqueror had claimed. Ultimately a compromise was arrived at which practically recognised the king's power of making ecclesiastical appointments, and required the higher clergy to do homage for their temporalities - in other words their estates - like the lay baronage.

But Henry surrendered the right of actually investing his nominees with the insignia of their spiritual office. For the rest, the king was as firm as his predecessor in refusing admission of papal legates or papal letters to the kingdom without his leave or the carrying of appeals out of his kingdom to Rome.

Adinistration Reform
The great importance of Henry's reign, however, lies in his organisation of the system of government, which provided the foundations upon which Henry II was afterwards to build. Henry was perhaps not a genius, certainly no idealist and no hero; but he was shrewd, far-sighted, determned, and in things political master of himself.

Two underlying principles may be observed in his policy - the disintegration of the forces adverse to the power of the Crown, and the consolidation of the forces making for the power of the Crown. Externally that power was threatened first by rebellion which made Normandy its base, and secondly by the pretensions of the papacy. How he dealt with these dangers we have seen.

Internally the danger arose from the power of the barons. Here he was helped by the extensive opportunities for confiscation which followed on the various rebellions. The greater estates the king retained in his own hand, while the lesser he distributed so as to avoid a material increase in the power of those who were already strong.

Further, he used his rights as suzerain to divide inheritances which fell vacant among the sons, so as to separate the holders of fiefs in Normandy and fiefs in England, and generally to prevent the accumulation of great estates in the hands of single feudatories. In ail this he simply applied the precedents set by his father.

The Lion of Justice
For strengthening the Crown the method upon which Rufus had relied was the merciless application of sheer brute force. Henry's method was the resolute administration of the law without fear or favour, unless it were fear of and favour to the king by ministers dependent on the Crown. And even here there was no encouragement to wrest the law in the king's favour, though he might and did exact his legal rights to the uttermost farthing.

It does not appear that Henry was moved by any strong desire to strengthen the courts of the shire and the hundred as against the extensive jurisdiction which had already been appropriated by the landowners. All that he did in this direction was to check the process under which all their functions were gradually departing from them, by requiring that they should meet at regular intervals.

Judicial visits
Of great importance, however, was the development of the practice of sending supervising justices on occasional visits to different parts of the country, who took in charge the trial of the more important cases, and uniformly applied the law in the shire courts as it was recognised in the king's own court, the Curia Regis.

Their registered judgments were established as precedents, and thus a comparative uniformity was given to the law at the same time that the capricious activity of the sheriffs was kept in check.

Commissions of Justices
These justices, or commissions of justices, with the king behind them, had nothing to fear from local magnates but were rather feared by them; and their exact and even-handed administration of the law won for Henry the title of the Lion of Justice.

"A good man he was" said the Anglo-Saxon Chronicler, "and there was great awe of him. No man durst misdo against another in his time. He made peace for man and beast. Whoso bore his burden of gold and silver, no man durst say to him aught but good".

Curia Regis
The Curia Regis, the central court of justice, was always in attendance on the king's person. It comprised the great officers of state and law officers appointed by the Crown. It was practically the same body which, as the Court of the Exchequer, took charge of the national finance and examined the accounts of the sheriffs who were responsible for collecting and handing in. the revenue.

For portions of the revenue the sheriff paid a fixed amount, and made his own profits off the difference between this agreed sum and the amount collected. For the danegeld, however, and the fees and fines collected under feudal law, he had to render a precise account.

It is to be noted that in this reign many payments which had hitherto been made in kind were required to be in silver; a fact which points to a considerable increase in the circulation of the precious metals as a medium of exchange.

Henry was not far short of seventy when he died, a ripe age for a medieval monarch. There was no sign of enfeeblement of his powers when his end came. His contemporaries regarded him with an admiration which his success as a ruler entirely deserved. In spite oi his wars on the continent and the rebellions in England which marked his first years, he gave the country order and peace in marked contrast to the two reigns which preceded and followed his own.

Henry's Legacy
The measure of his success is shown by the ease with which Henry II restored and developed the system which he had organised, although nineteen years passed between the death of the grandfather and the accession of the grandson - years which represent a period of wild anarchy, in which there was no supreme controlling force whatever, and the one institution which succeeded in maintaining something of its own dignity, some fragment even of a higher idealism, was the Church.