Charles I and the Long Parliament 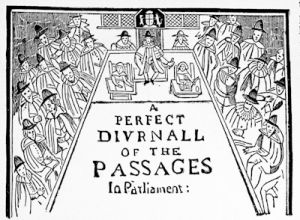 A newspaper heading of 1641

Strafford
Among the supporters of the king [Charles I] there was a single commanding figure which utterly dwarfed all others, one man whom the Commons of England had learnt to regard as their deadly enemy, one man whom they hated because he was the man whom they feared — the apostate Strafford. Laud might be the object of popular detestation but no one was afraid of him, or of the crowd of intriguing courtiers who were much less likely to devise a working scheme of absolutism than to wreck by short-sighted jealousies the daring designs of the one master mind.

While Strafford stood by the king, the Commons could devise no stroke without the fear that it might be defeated, and even turned against them, by the keen brain and the indomitable will of the great minister. Before anything else could be accomplished Strafford must go.

Among the moderate men there were at least not a few who believed or hoped that if Strafford were removed the king and the nation might be reconciled. Charles, with no Buckingham and no Wentworth to dominate him, might submit to be guided by the moderates, and all would be comparatively well. But while Strafford remained nothing could be done.

The Scots were in possession of the north of England, but the parliament and the English nation had nothing to fear from the Scots. The Houses had hardly been assembled when the Commons resolved on the impeachment of Strafford.

The earl, now fully alive to the temper of the people and the parliament, conscious that his enemies would leave no stone unturned in their efforts for his destruction, knew that both his own safety and the safety of the king would best be served, if only the king could be trusted, by his own withdrawal to Ireland; but the king dared not stand alone.

Strafford impeached
Strafford remained to abide the storm. The Commons, led by Pym, impeached him of treason at the Bar of the House of Lords; he was arrested and confined in the Tower. Within six weeks Laud too was arrested on the charge of treason; others of the king's most prominent agents had fled the country in fear of a like fate.

Strafford had been some four months in prison before the preparations for the trial were complete. But when the case for the prosecution, was unfolded, it became more and more evident that the charge of treason must break down in law.

Strafford had striven to subvert the constitution, as interpreted by the parliamentary lawyers; but seeking to make the Crown absolute could by no means be translated into treason in the technical sense. The Lords were sitting as the supreme legal court in the country, and were bound to give judgment according to law.

The Commons' managers of the trial saw that they would be defeated. The most effective piece of evidence was contained in papers, in which, referring to the Scots war, Strafford had said: "You have an army in Ireland that you may employ to reduce this kingdom to obedience, for I am confident the Scots cannot hold out three months."

But, however popular feeling might be inflamed by the charge that Strafford had meant to use the army in Ireland to coerce England, it was, in the first place, impossible to prove that England, not Scotland, was the country to be coerced, in which case the English Parliament had nothing to say in the matter; and, in the second place, it was more than doubtful whether the term treason could be stretched to cover words inciting the king to coerce his subjects.

The Commons then resolved on a step which set the struggle on a new footing. Hitherto they had taken their stand on the law; at all points they had claimed that they were asserting the legal rights of the House of Commons against prerogatives claimed by the Crown which had no place in the constitution. Now they found that the law was against them; not merely the law as interpreted by judges whose authority was deprived of weight by their personal dependence on the king, but the law as it must be interpreted by the House of Peers itself.

Strafford attainted
Punishment, therefore, could only be inflicted by a process overriding the law, and this could only be effected by a special Act of parliament dealing with the emergency; not a resolution of one House or of both Houses, but an Act by the king in parliament, the ultimate sovereign authority which alone can override all law. A bill of attainder condemning Strafford to die as a public enemy was introduced and carried in the House of Commons, It was carried in the House of Lords.

Charles gives way
The king had given Strafford the most solemn pledges that if he remained in England he should be protected by the Crown. Without the king's assent the Act was waste paper. Would the king veto it? Would he face the storm of popular resentment which was already beginning to clamour against the queen as well as the minister. Queen and courtiers hated the great man who was no courtier; they were blind to their own incapacity, to their own need of Strafford. Every influence was brought to bear upon Charles to persuade him to surrender. He yielded, and by the great betrayal sealed his own doom.