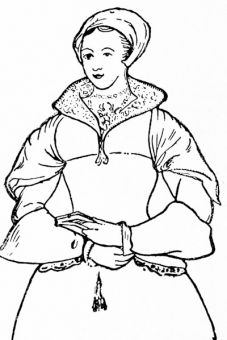 Northumberland had not achieved popularity. The fact was clearly implied when still a new Treasons Act was introduced at the time of Somerset's death. The Commons were ready to restore "verbal treason" to the Statute book, but, with pointed reference to the evidence produced against Somerset, they demanded that the evidence of at least two witnesses should be held necessary to condemnation.

The plain fact was that the fall of Somerset in 1549 had introduced changes of policy and a change of persons in the government, but no improvement at all in administration, while the changes of policy had not commanded popular assent. The national finances were in appalling disorder, the fleet which Henry VIII had created was falling to pieces, and the government had been obliged to surrender Boulogne to France without getting the indemnities for which it had been held in pledge.

When a new parliament met in 1553, it showed very little inclination to adapt itself to Northumberland's views, in spite of the fact that every effort had been made to pack it with satisfactory representatives. Northumberland's influence was indeed supreme with the young king; but Edward, though of an extraordinary precocity, had always been extremely delicate. Northumberland knew that he was dying, and that he himself had not time to secure his position before a successor to Edward should be seated on the throne. The law had settled indisputably who that successor was to be.

The succession question
Parliament had not only authorised Henry VIII to fix the course of the succession by his own will; it had also expressly ratified that course as he laid it down. The question of legitimacy was suspended and Mary was nominated the heir to Edward VI; failing Mary, her half-sister Elizabeth. After Elizabeth under the will stood Frances Grey, who was now Duchess of Suffolk, and her daughters.

If the will were challenged, the question of legitimacy at once took the first place. Every adherent of the old religion was bound to look upon Mary as Henry's legitimate child. If, however, the decisions of the English Law Courts were relied upon, Mary and her sister were both illegitimate, and in that case it was manifest that the legitimate heir was Mary Stuart, not any of the Greys. Even on the hypothesis that Mary Stuart was barred as an alien, the Lennox Stewarts, being English as well as Scottish subjects, were not similarly barred and came before the Greys.

Northumberland's plan
Nevertheless, Northumberland conceived a desperate plan of placing Lady Jane Grey upon the throne as his own puppet; to which end he procured her marriage to one of his sons, Guildford Dudley. Mary's succession was absolutely certain to mean his own ruin, since she was passionately attached to the Roman Church, besides having been treated personally with extreme harshness during his own tenure of power. As a substitute, Jane Grey was more likely to serve his purposes than Elizabeth.

His plan, then, was to claim that the dying king could subvert his father's will and himself nominate his successor. Edward's Protestantism was as fervid as Mary's Romanism, and Northumberland found no great difficulty in persuading him to fall in with the scheme in view of the danger to Pro­testantism attendant on Mary's accession. It was no such easy matter to persuade the Council.

Its members had indeed little enough to hope from Mary; Lady Jane Grey would suit most of them much better. But it was next to impossible to find any sort of constitutional justification for the scheme, which was doomed to disastrous failure unless the nation acquiesced, as it was exceedingly unlikely to do. Still Northumberland succeeded.

Reluctant members of the Council suddenly realised that their lives and liberties would be in immediate danger unless they threw in their lot with Northumberland: so they gave their assent subject to the approval of parliament. The judges declined to draw up the necessary Letters Patent without parliamentary authority, until they received their orders under the Great Seal together with a formal pardon in case it should subsequently be held that they had acted illegally.

The Letters were signed by members of the Council and others; among them Cranmer, who refused until he was induced to believe that the judges had declared the whole proceedings to be legal, and the Secretary William Cecil, who afterwards averred that he had signed merely as a witness. Fifteen days later the king was dead. Two more days passed before the fact became known, and on the fourth day Lady Jane Grey was proclaimed queen.

The Nine Days Queen
All that cunning could accomplish Northumberland had done. He alone had soldiers available; not a member of the Council could move him. He had control of the pulpits, which were perhaps the nearest equivalent of the time to our newspaper press, and could count on impassioned appeals against the succession of a papist.

For his puppet he had a child of sixteen, the new-made bride of a son of his own. Yet it was from this same child that he received the first check. When the great men of the realm came to her and declared to her with one consent that she was the lawful Queen of England, with plenty of plausible demonstrations, what could she do but believe them and accept, however reluctantly, the responsibilities laid upon her?

A dangerous puppet
But when Northumberland would have claimed that her husband should be crowned king, she flatly refused. Guildford Dudley might be her husband, but he assuredly had no right to the Crown of England. Northumberland discovered that the puppet might prove dangerously independent, if the path which he meant her to follow should be crossed by the path of her duty as she conceived it.

Ominous too was the silence with which the Londoners received her proclamation, a silence broken by a voice from the crowd saying, "The Lady Mary hath the better title." Ominous, again, was the escape of Mary herself, who had received the news of her brother's death just in time to enable her to ride hard out of the reach of the men who had been despatched to secure her person. Ill news poured in. The forces with which two of Dudley's sons went in pursuit of Mary turned against them, and the Dudley's had to ride for their lives. The country was rising in arms.

Northumberland's Fall
The duke was in a dilemma. If he remained in London to overawe the Council, the whole country would declare for Mary. If he went forth himself to crush revolt the Council might turn against him. He chose the second risk as the lesser. Five days after his departure, watched in grim silence by the Londoners, the Council declared tor Mary, proclaimed her queen at Paul's Cross amid general acclamations, and sent a messenger post-haste after Northumberland ordering him to lay down his arms. The message was superfluous, the traitor had realized that in spite of all his intrigues he stood alone, deserted. The bubble was pricked. He had played a gambler's throw and lost, and in the hour of defeat he showed himself pure craven.

He threw himself on the queen's mercy; and she would have spared even him in her magnanimity had she not yielded to the unanimous voices of her counsellors. In deference to them and to the pressure of public opinion, Northumberland himself and two of his accomplices were sent to the death which they very thoroughly deserved. Lady Jane was sent to the Tower. Bishop Ridley, who had preached a fervid sermon in favour of Queen Jane, was imprisoned; so were a very few more; but the generous extension of pardons was almost without parallel. None could have guessed from the commencement of Mary's reign, that she would be singled out among English monarchs to be labelled with that cruel title by which posterity has known her.

The completeness of Mary's victory is in no wise astonishing. There was absolutely no conceivable ground for challenging her title except the fact that Cranmer's ecclesiastical court had pronounced her mother's marriage invalid, a plea which was equally effective against the only other child of Henry VIII. Had there been a male claimant to the throne it might have been urged that there was no precedent for the occupation of the throne by a woman; but every other possible claimant — Elizabeth, Mary Stuart, Jane Grey, even Lady Lennox — was also a woman.

No one could pretend for an instant that Lady Jane had been put up with any object whatever except that of securing the ascendency of Northumberland, and that ascendency was already becoming intolerable. The people of England had acquiesced in deflections of the succession, but those changes had always been born of rebellions which represented a strong national opposition to flagrant misgovernment. Here there was nothing of the kind. The usurpation was attempted in order to maintain a thoroughly bad government in power.

The extreme Protestants might indeed feel that a Romanist restoration must be prevented at any price; doubtless Northumberland had hoped that such was the dominant sentiment of the country. But the reformers had moved forward far in advance of popular sentiment; the public at large were prepared to acquiesce in whatsoever religious forms might be imposed upon them by authority, it was the Marian persecution itself which created in England the deep-seated hatred of "popery."

Protestantism had rooted itself firmly in a portion, but not in the major portion, of the nation, which was quite prepared for a return to the position as it had been under the Protector or even under Henry VIII in his last years; and the nation had no reason to anticipate that the reaction would go further, no particular sympathy for the advanced Protestants who might suffer. And at the outset of Mary's reign there was every appearance that the national anticipations would be justified.