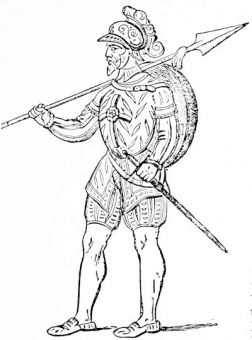 A pikeman, from an early 16th century MS.

It was inevitable that there should be a reaction [to Mary's succession to the throne], but there was no sudden and sweeping attack. Ample time and opportunity were given for Protestants, lay and clerical, to leave the country if they felt themselves too deeply committed to remain in safety; of which not a few, including John Knox, took advantage. Ridley was imprisoned, not for his religious opinions, but for his active promotion of treason.

Cranmer and Latimer chose to invite arrest and deserve full credit for their courage; but they, who had been privy to Gardiner's imprisonment for years past, had certainly no ground of complaint. For the rest, Gardiner and Norfolk were of course released, and it was obvious that the party so long suppressed would now have the upper hand; but there was no vindictive treatment of the other side.

Anxiety, however, soon began to grow. The queen would marry, and much would depend on her choice of a husband. Her choice fell on her cousin Philip, the Prince of Spain, the son of the still reigning Emperor Charles V. The marriage was exceedingly unpopular, since men felt that such a union was in danger of subordinating English to Spanish interests, and also of strengthening the Romanist reaction.

How far the country was prepared to go was shown by the parliament, which formally asserted Mary's legitimacy and repealed the ecclesiastical legislation of Edward VI, but declined to touch Henry's legislation at all; while the Commons petitioned the queen not to marry a foreigner. The queen's advisers, however, including Gardiner, found her so determined on this head that they were obliged to content themselves by insisting on the insertion in the marriage treaty of every possible safeguard against the exercise of Spanish influence.

Sir Thomas Wyatt
It was not by any means only the Protestants who detested the Spanish marriage. Within a fortnight of the signing of the treaty an insurrection had broken out, headed by Sir Thomas Wyatt, which was ostensibly directed against the marriage. Wyatt's undoubted intention was to depose Mary, set Elizabeth on the throne, and marry her to an English nobleman, the young Edward Courtenay, Earl of Devon, who was descended from Edward IV. Of complicity on Elizabeth's part there was no sort of proof.

Elizabeth's complicity?
The common sense of all such conspiracies required that the figurehead should be able to proclaim innocence with righteous indignation if matters went wrong. That rule applied to all operations involving breaches of the law or of what passed for international law. Elizabeth herself, Mary Stuart, Henry of Navarre, and Philip of Spain, nearly always managed to be in a position to repudiate any personal association with illegalities committed in their name; and yet we can be tolerably certain that they generally knew precisely as much as they wished to know of what was going on.

For a long moment it seemed possible that Wyatt's insurrection might develop into a general rebellion. The troops sent against him deserted with the cry "We are all English." London was in a panic, and the Council appeared to be at their wits' end. Mary's own masculine courage and audacity stemmed the tide. Wyatt, unable to cross the bridge at Southwark, moved up the Thames, crossed at Kingston, and so marched towards the city. But his long straggling column was cut in two.

The portion which reached Ludgate was already exhausted and was overcome with no great difficulty, Wyatt himself being taken prisoner. Wyatt, who stoutly declared Elizabeth to be completely innocent, was executed; so were about a hundred of his followers.

Executions
Suffolk, the father of Lady Jane Grey, was implicated, in spite of the generosity with which he had been treated in Northumberland's affair. He too was now deservedly executed, together with his hapless daughter and her husband Guildford Dudley. Elizabeth was sent to the Tower, but was shortly afterwards released, though she was held under very strict surveillance throughout the reign.