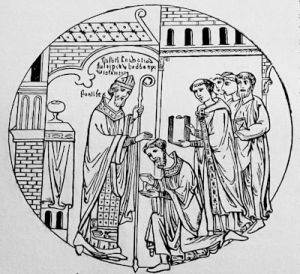 Ordination of a priest, 12th century, from the Roll of Guthlac in the British Museum

Norman kings bore sway in England for eighty-eight years. That period was not one of progress; it cannot be said that at the end of it the people of England were more prosperous or the political status of the country higher than in the days of Canute or of the Confessor.

Superficially at least the Conquest has the appearance of a convulsion which turned the land upside down from end to end, overthrew its institutions, and set up an entirely new system while imposing upon the English control by an alien and conquering race. We are able to discover, when we get below the surface, that fundamental institutions were not after all destroyed.

The Normans introduced a new factor, but they did not wipe out what they had found before them. The new factor and the old conditions, violently antagonistic as they were at the outset, had to be adapted to each other and harmonised into new conditions, which should render a national growth possible. The Conqueror by blood and iron, and Henry I with his cold-blooded aptitude for business, constructed out of the warring elements foundations on which it was possible for their successors to build ahd which even the impotence of Stephen did not obliterate. The building was taken in hand by the first of the Plantagenets and the era of English progress began.

Henry II found the hostility of Norman and Englishman already being forced into the background by the common danger from unlicensed feudal­ism which threatened the bulk of the Normans no less than the Englishmen themselves. Before the close of his reign a notable public official, Richard FitzNeal, could affirm in his Dialogus de Scaccario (i.e. the Exchequer) that Norman and Englishman had become practically indistinguishable outside the class of villeins.

The unifying process was completed when the separation from Normandy identified the interests of even the greater baronage entirely with the country in which all their estates now lay; and at least from the beginning of the thirteenth century, the entire baronage looked upon itself as English and was imbued with the nationalist conception of the state. This disappearance of racial hostility was the first condition of national progress.

The second necessary condition was the development of a higher moral standard. The Conquest tended to force to the front all the baser and more brutal qualities alike in the-conquerors and in the conquered—greed, cruelty, vindictiveness, treachery. The sheer excesses of Stephen's reign brought about reaction, a craving for order, a revulsion against the principle that might is right.

In all the civil strifes during the Angevin period there was no reappearance of the horrors of the anarchy. But the change -which came was more than a mere revulsion against abnormal excesses. A positive conception of personal duties and obligations permeated the higher ranks of the community. Barons and knights were not indeed possessed with a sudden spirit of altruistic self-sacrifice, but the chivalric ideal became elevated and purified though it was often enough misdirected.

A Coeur de Lion provided an infinitely higher type for imitation than a Rufus; and the change which made a Richard rather than a Rufus the ideal of knighthood prepared the way for a conception of knighthood which took for its ideal a St. Louis or a Simon de Montfort. Men had learnt at least to pursue ends that were not purely selfish, and to take thought for the public good.

In bringing about this change the Church played a not inglorious part. At the close of the eleventh century and throughout the twelfth, the papacy was in aggressive conflict with the lay potentates of Europe. But England was too remote from Rome to be very directly involved in that struggle

The political aggression of the papacy, however, was in itself the outcome of a lofty conception of the Church's duty in the world, a conception by which the clergy in England were as emphatically actuated as the Popes themselves.

From Lanfranc to Edmund Rich the archbishops of Canterbury and many of the bishops provided conspicuous examples of that public spirit which only began to make its appearance in the time of Henry II.

Becket and the Popes of the thirteenth century were, responsible for translating the ecclesiastical ideal into one of conflict between the ecclesiastical and the secular authority; but Stephen Langton, Edmund Rich, and the great bishop Grossetete of Lincoln, the friend of Simon de Moutfort, were the foremost champions of the highest ideals of their day. And to their support came a new movement which, gave the religious sentiment a new vitality.

The orders of Mendicant friars, founded by St Francis of Assisi and by St Dominic were planted in England just after the accession of Henry III. By precept and example the brothers taught men to deny themselves, not, like the ascetics, for the discipline or salvation of their own souls, but for the welfare of others, material as well as moral. Political and moral progress reacted upon material, progress to which the Conquest had in the first, place given a set-back.