Tories and Whigs, the beginnings of party politics 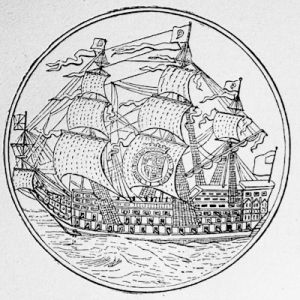 An English ship of war, in the time of Charles II, from a medal

The Cabal dissolved
But the Test Act and the Peace of Westminster were not the only results of the reassembling of Parliament. The Test Act itself excluded from office the Duke of York and Clifford with other Roman Catholics. Shaftesbury, more than suspicious that the king had tricked him, went into opposition along with Buckingham. The Cabal was dissolved, and Charles called to his counsels the High Anglican and Cavalier, Sir Thomas Osborne, who was made Earl of Danby and Lord Treasurer.

The Danby administration
From the Danby Administration may be dated the beginnings of the division of parliament into two organised parties, though they cannot as yet be defined as Ministerialists and Opposition, because sometime was still to elapse before it became a matter of course that all the ministers of the Crown should be chosen from the one party.

Court Party and Country Party
But although the principle of forming a united ministry, with its corollary of collective responsibility, had not yet come into play, during the rest of the reign of Charles II, parliament was shaping itself into the two divisions which became known as the Court Party and the Country Party, and ultimately as Tories and Whigs.

Now also was inaugurated that extensive system of party management, by the distribution of places and emoluments and still more flagrant forms of bribery, which so corrupted parliament during the ensuing century. Charles chose Danby as the champion of Anglicanism and Royal Prerogative in spite of the fact that the minister was exceedingly hostile to France.

For the time being it suited Charles very well to make a show of independence of Louis. He intended to make his bargain with the French king, but he could get improved terms, even at the cost of a temporary estrangement, though the estrangement must not go too far.

Shaftesbury was determining upon his line of policy, of which the primary aim was to be the exclusion of the Roman Catholic Duke of York from the succession to the throne, while the immediate design was to procure a dis­solution in the expectation that a new parliament would set the country party decisively in the ascendant and compel the dismissal of Danby. But, when parliament met after an extended prorogation, Shaftesbury and Buckingham over-reached themselves in their opposition and were relegated to the Tower.

By this time Charles was in fact fencing with Louis. Danby was allowed to push forward his anti-French policy. The Princess Mary, the Protestant daughter of the Duke of York, and heir-presumptive to the throne if she should outlive her father, was married to William of Orange, Holland being still at war with France; and Danby joyfully believed that England would now be carried into the war on the side of Holland.

But Danby was to be disappointed. Through the first half of 1678 elaborate intrigues were going on. Louis wanted to bring his Dutch war to an end. He was in communication with sundry leaders of the Opposition in England, who, while they could not risk the unpopularity of openly opposing a French war, were bent on the overthrow of Danby, who was conspicuously identified with the war policy.

On the other hand, Charles merely wanted to use the threat of war in order to extract better terms for himself from the French king. By Charles's orders and very much against his own will Danby was compelled to write to the English ambassador at Paris offering English aid in bringing the war to a close for a substantial cash consideration.

Secret treaty
A secret treaty was ultimately framed, under which Charles was to get his money and was to disband the troops then being raised for the war, conditions which gave to Charles what he most wanted and to the Opposition leaders what they most wanted, while Louis made his terms with the Dutch without English inter­vention. But the letter which Danby had written was presently to be employed as an instrument in procuring his fall.