The Reign of Richard II 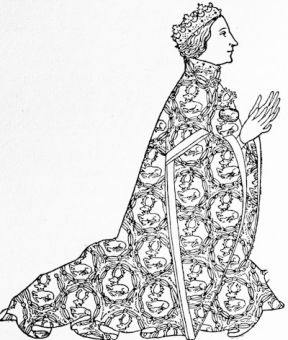 Richard II, from the contemporary painting belonging to the Earl of Pembroke

In the Peasant Revolt the young Richard had displayed the qualities of courage, self-reliance, and readiness in emergency in a very high degree. But he was still only a half-grown boy, the direction of affairs was virtually in the hands of his Council, and the effective head of the government was his eldest uncle, the Duke of Lancaster, who, fortunately for himself, was absent in Scotland at the time of the revolt.

But Lancaster's administration through these first years of the new reign continued to be inefficient; he was extremely unpopular, and the high-spirited boy resented his control. By way, perhaps, of counterbalancing him, his brothers were now made Dukes of York and Gloucester, but the young king did not place himself in their hands, giving his confidence instead to a young favourite, the Earl of Oxford, and more wisely, to an experienced official, Michael de la Pole, who was made Earl of Suffolk — the first instance of a mercantile family being raised to the baronage.

An invasion of Scotland of the usual type, in 1385, on which Lancaster was accompanied by the young king, did nothing to improve the duke's position; and immediately after it he retired from England, in the hope of enforcing his own claim to the crown of Castile through his wife, a daughter of Pedro the Cruel, who had ultimately been ejected by Henry of Trastamare.

But Lancaster's departure did not improve matters for the king, since it gave Gloucester an opening to place himself at the head of the opposition to De la Pole, whom the baronage regarded as an upstart.

Moreover, the king made himself unpopular by the honours and the wealth which he lavished on his favourite, the Earl of Oxford, whom he made Duke of Ireland, whereas Gloucester made it his business to court that popularity which had never been sought by his brother of Lancaster. An alarm of a French invasion roused popular anger against the administration which had rendered such a thing possible; and it was easy enough to make the king's favourite counsellors the objects of public indignation, though Suffolk was perhaps the last person who deserved it.

The baronage, headed by Gloucester and supported by the Commons, refused supplies unless the obnoxious "favourites" were removed from their offices; and ominous references were made to the deposition of Edward II.

The king ostensibly surrendered, and according to precedent a Council was nominated to control the administration. But Richard's apparent surrender was merely a temporising expedient. In the following year he called an irregular assembly at Nottingham, attended by the judges, which pronounced that the proceedings of the late parliament were unconstitutional and invalid.

The Lords Appellant triumphant
Gloucester and his allies at once took up arms "to deliver the king from evil counsellors," according to the familiar formula. Five of them proceeded to "appeal" five of the said evil counsellors of treason, and hence became known as the Lords Appellant. The king and his friends could make no corresponding display of force. The Duke of Ireland succeeded in making his escape from the country; so in course of time did Suffolk; The king himself became practically a prisoner, and the Lords Appellant were complete masters of the situation.

However, they continued their professions of loyalty to the king himself, and summoned what is sometimes called the Wonderful and sometimes the Merciless Parliament. The five "evil counsellors" who had been appealed were impeached; so were the judges who at the Council of Nottingham had pronounced the proceedings of the previous parliament invalid. Other victims were added, although one at least of the Lords Appellant, Henry Earl of Derby, the son of the still absent Duke of Lancaster, endeavoured to check the vindictiveness of Gloucester.

And yet, in spite of the completeness of his defeat, the king in the following year again effected a revolution. In 1388, the year of the Wonderful Parliament, he was not yet of full age. But in 1389 he reminded the Council that he was now twenty-one, and being no longer a minor was en­titled to follow his own counsel; he would dispense with their further services.

Strangely enough, they acquiesced in the dismissal. Probably the Appellants knew that the use they had made of their power had lost them the popular favour which had at first made them irresistible. At the same time the king was wise enough to avoid their blunder, and to abstain from retaliatory measures, which would have made Gloucester and the rest turn to bay.

But he recalled his uncle of Lancaster, on whose loyalty at least he knew he could depend, whatever his faults might be. Lancaster had at last learnt the futility of his enterprise in Castile, and his presence would effectively muzzle the Duke of Gloucester.