The Fall of Richard II 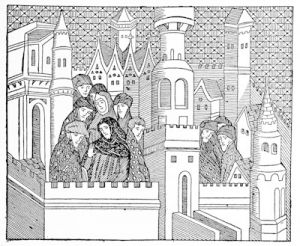 Richard II, having landed at Milford Haven, goes to his friends at Conwy Castle, from a 14th century MS. life of Richard

The French war had worn itself out, and the desultory raids and counter-raids on the Scottish border were brought to an end. Richard, after all, made no violent changes in the personnel of his ministers and his Council, and for some years the government was continued on orderly and constitutional lines. To these years belong the amendments to the Anti-clerical statutes of Provisors, Mortmain, and Praemunire which made them more stringent; while the new form taken-by the last statute ultimately made it a most effective instrument in the final contest with Rome.

These measures were significant of the constant growth of the Anti-ecclesiastical sentiment and of the multiplication of the disciples of Wiclif, who were now known as Lollards. On the theological side this movement was beginning to develop the advocacy of novel doctrines, which were very shortly to be pronounced heretical; but it is safe to say that most of what passed for Lollardry at this time had but little to do with theology, and was directed almost entirely against the clerical wealth and clerical worldliness which scandalised a laity by no means unprosperous or eager on its own part to renounce the world and the flesh.

Unhappily, Richard's self-restraint and moderation were only assumed, cloaking a self-willed and vindictive spirit. He was biding his time, and in 1397 he thought that his time had come. Gloucester's conduct laid him open to suspicions of treasonable intrigues.

Suddenly the king struck. Gloucester was arrested and sent off to Calais under the charge of Thomas Mowbray, Earl of Nottingham, one of the Lords Appellant who, like Henry of Bolingbroke or Derby, had acted as a restraining influence on the other three. At the same time with Gloucester, the other two Lords Appellant, Warwick and Arundel, were arrested.

Trial and execution
In effect no new charges were brought against any of the three; the real ground of the attack was their conduct at the time of the Merciless Parliament. Arundel was tried and executed; his brother the Archbishop was impeached and sentenced to confiscation and banishment. Warwick confessed his old guilt and was banished. But Gloucester did not appear to answer the charges; Mowbray announced that he had fallen ill and died at Calais.

Public rumour of course affirmed that Mowbray had put him to death by the king's orders; and the circumstances were at least suspicious enough, though the truth of the report was never proved. Perhaps the strongest argument against the belief is to be found in the fact that, if it was impolitic to run the risk of openly putting Gloucester to death as a traitor after fair trial, it was still more impolitic to risk the suspicion Of a secret assassination.

Nottingham and Derby, whose conduct from the very beginning had distinguished them favourably among the Lords Appellant, were treated with conspicuous favour, and were made Dukes of Norfolk and Hereford respectively; still, both of them must have suspected that danger lurked behind the king's show of friendliness.

The Shrewsbury Parliament
A parliament, however, was summoned in 1397 at Shrewsbury, and Richard found that it represented a marked reaction of sentiment in his favour. The country may well have imagined that the elaborate machinery for the curtailment of the royal power had been warranted when the king was a boy but was superfluous now that he was a man experienced in affairs, who certainly possessed kingly qualities, and, since his coming of age, appeared to have learnt self-mastery and moderation. Even his recent proceedings could hardly be called vindictive.

So the Shrewsbury Parliament showed itself ready to reestablish the royal power free from the trammels which had been imposed during Richard's reign. The proceedings of the Wonderful Parliament were formally condemned, while the pronouncements of the Nottingham Council were confirmed. It was even resolved by this assembly that no restraint set upon the king could be legal; and that anyone hereafter attempting to reverse its own proceedings would be guilty of treason. Finally it took the fatal step of surrendering its own powers to a committee of eighteen, which would thenceforth be able to act in the place of parliament - the committee being virtually Richard's own nominees.

But Richard was still unsatisfied; the field was not yet clear so long as Norfolk and Hereford were in the country. The two dukes played into his hands. Norfolk confided to Hereford his own suspicion of Richard's sinister intentions; Hereford communicated this confidence to the king, who invited him to charge Norfolk publicly with what he had said, Norfolk gave Hereford the lie, and the question was referred to ordeal by battle.

Norfolk v Hereford
Thousands of spectators assembled to witness the fight; the lists were prepared and the combatants ready; when Richard suddenly stopped the proceedings and pronounced his own award that both should be banished, Norfolk for life and Hereford for ten years, though without prejudice to his own estates or to his rights of succession when his father, John of Gaunt, should die. And now it seemed that nothing stood between Richard and such an absolutism as no King of England had ever enjoyed.

But his finishing stroke had been an act so arbitrary, so utterly impossible to reconcile with equity, so manifestly and essentially tyrannical, that any pretence of constitutionalism on Richard's part was rendered absurd. For the brief remainder of his reign Richard acted as an unqualified despot.

To procure money he raised forced loans and imposed heavy fines upon individuals and upon districts which has been in any way implicated in any of the so-called treasons of the Lords Appellant. With the funds thus procured he raised and maintained a great bodyguard of archers, who in effect formed a not inconsiderable standing army at his own immediate disposal. The old Duke of Lancaster died and the king seized the inherit­ance. And then he betook himself out of England to quell an insurrection in Ireland.

The last step was fatal.

Henry returns
Henry of Hereford, robbed of his duchy of Lancaster, returned to England, landing at Ravenspur in Yorkshire and bringing with him the exiled Archbishop Arundel. He at once proclaimed that he had come to demand only his lawful inheritance of Lancaster. He was promptly joined by the Earls of Northumberland and Westmorland. The Duke of York, acting for the absent Richard, gathered a large force.

But public sympathy was entirely on the side of the duke, unjustly banished and unjustly robbed; York's musters refused to march against Lancaster. York hurried to the west, while Henry marched in the same direction, gathering fresh adherents, still proclaiming that for himself he sought only his inheritance, though to this demand was now added that of the removal of Richard's evil counsellors. York parleyed; York was convinced; York went over to Lancaster. The few leading adherents of the king in the west were captured and executed.

From Ireland the Earl of Salisbury hurried back to raise forces for the king in Wales; but when Richard himself arrived a fortnight later, it was only to find that Salisbury's levies had dispersed again. Then came the Earl of Northumberland on Henry's behalf with a proffer of terms — the trial of Henry's prominent supporters before parliament, and the appointment of Henry himself as Grand Justiciar.

The king deposed
The proposals were obviously impossible, but Northumberland effected his real object; which was to draw Richard into an ambush of his own followers. The unlucky king was carried off to Flint Castle, thence to Chester, and thence to the Tower. A parliament was summoned, and the king was forced to sign an Act of Abdication.

A dubious claim
An Act of parliament was passed setting forth the reasons for the deposition. Henry then advanced and claimed the throne for himself on the somewhat amazing plea of his descent, not from Edward III. through his father, but through his mother from Edmund Crouchback of Lancaster, the brother of Edward I; the pretence being that Edmund was the elder brother, but had been set aside on account of deformity. Obviously the legitimate heir of Edward III, if Richard was set aside, was the child Edmund Mortimer, the great-grandson and representative of Edward's second son, Lionel of Clarence; for it could hardly be pretended that English law or custom rejected descent through the female line.

Hence this curious attempt to create a technical claim going back to Henry III. Parliament proceeded to pronounce Henry to be the rightful King of England; but it was the patent fact that the technicalities had been set aside, and that Henry was king because parliament for whatever reasons chose that he should be king - not because he stood next to the Crown in blood. Edmund Mortimer was quietly ignored, although his father Roger, recently slain in Ireland, had been recognised before his death as heir-presumptive by Richard himself.