Scotland in the Reign of Henry VIII 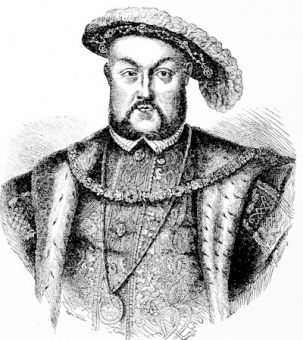 Henry VIII, after a portrait generally attributed to Holbein

The story of Scotland during these years falls into two divisions, the period of the minority of James V., and that of his personal rule. After Flodden, the infant king's mother, Margaret, the sister of Henry VIII, was made regent. A year later she married the young Earl of Angus, who had just succeeded old Archibald Bell-the-Cat; but in the meantime a powerful section of the lords resolved to place the regency in the hands of the Duke of Albany, the son of that Albany who played so active a part in the reign of James III.

The duke, it must be observed, was to all intents and purposes much more of a Frenchman than a Scotsman; but he stood next in Blood for the succession to the two infant princes, of whom the younger, a posthumous child, did not long survive. Family relationships played so important a part, and are at the same time so confusing, that it is advisable to grasp them clearly.

Next to the throne, then, was John Stewart of Albany—Stuart was the French spelling of the name ultimately adopted by Queen Mary. Next to Albany stood the Hamilton Earls of Arran; the mother of the actual James, Earl of Arran, was the sister of James III. Next to the Hamiltons themselves were the Stewarts of Lennox, the mother of the present Earl of Lennox being a sister of Arran.

These Stewarts themselves were not of the royal family. The house of Albany will presently disappear; but we shall find the nearness to the throne of the houses of Arran and Lennox playing later on an important part in various political complications.

During the succeeding years, Albany, from the time of his arrival in Scotland in 1515, nominally held the regency, and was predominant while actually in the country. While he was not in the country, the factions of Arran and Angus struggled for supremacy. There were frequent hostilities with England on the Borders. English diplomacy was largely engaged in fostering the feuds of the Scottish nobles; Arran, with James Beaton, Archbishop of Glasgow, representing the party which clung to the French alliance and the hostile attitude towards England, while the Douglas party were the hope of Wolsey and Henry.

There is no doubt at all that Henry cherished the desire of turning Scottish factions to account in order once more to assert the obsolete English claim to the sovereignty of Scotland. He appears never to have grasped the fact that while there were Scottish nobles who were ready to make promises and to receive gifts, a threat to enforce English supremacy was the one absolutely certain means of uniting Scotland in an attitude of defiance.

Albany himself finally threw up the cards and left Scotland for ever in 1524. It is curious to find Arran now leaning to the English policy, with Angus on the other side. Angus obtained the upper hand, and for a time was supreme in Scotland, while he held the young king in an extremely irksome tutelage which inspired him with an intense hatred towards the Douglases.

In 1528 the king escaped from the hands of his guardians, and the moment he asserted himself, though he was but seventeen at the time, he found himself at the head of a powerful following. Men who supported Angus in a struggle of factions supported the king against him. Before the year was over the Douglases were driven out of the country.

It was the policy of James to ally himself with the churchmen, while his attitude towards the nobility was one of repression. Of the King of England and his designs he was with very good reason extremely suspicious; and these circumstances combined to make the Crown definitely hostile to the progress of the Reformation. An anti-English policy in Scotland always meant the drawing closer of the French alliance; and in 1537 James married the French princess Madeleine.

The bride, however, did not long survive the marriage, and in the following year James took to wife Mary of Lorraine, a daughter of the house of Guise, now one of the most powerful in France.

Mary of Guise
Mary herself was a woman of great ability, and she soon allied herself with David Beaton, the famous cardinal, who succeeded to the influence which had been exercised by his kinsman the Archbishop of Glasgow, and developed an extreme zeal as a persecutor of heretics. On the other hand, the king's treatment of the nobility, directed to strengthening the power of the Crown, was tending to drive the latter body into direct antagonism with James's clerical supporters. Hence we shall presently find the nobility to a great extent supporting the Reformation, and the reforming party looking to England for support.