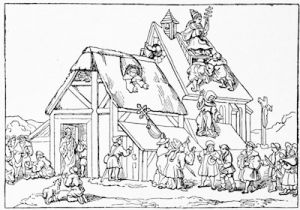 The two Shepherds, from a drawing by Hans Sachs, about 1525

Now Elizabeth herself was not a woman of strong religious feeling like her sister Mary. Her religion was in the main dictated by politics. Probably if she had been circumstanced like Henry IV of France, she, like him, would have considered that the Crown was "worth a Mass," although, not being similarly circumstanced, she expressed much righteous indignation when he acted upon that view. But her intellectual sympathies we're on the side of the conservative element in the Church, the element which desired the least possible departure from the old practices and doctrines.

A substantial proportion of the nobility, especially of what remained of the old nobility, was on the same side, and also perhaps of the old gentry. The north, too, was conservative, as it had been in her father's time, though in this respect the south-west had under­gone a transformation. Hence enthusiastic Romanists perpetually suffered from a conviction that the country would welcome the restoration of Romanism.

On the other hand, however, the parliaments were very emphatically Protestant, more Protestant than Elizabeth's government; and every one of Elizabeth's ministers, though in somewhat varying degrees, leaned in the same direction. It is hardly to be imagined that this would have been the case if popular sentiment had been with the reactionaries. At all times parliament was ready, even eager, to go further than the queen in favouring the puritan element in the Church, repressing Romanism, attacking Mary Stuart, and adopting an aggressively Protestant attitude towards the European Powers.

The English people have never, like the Scots, taken a keen delight in metaphysical and logical arguments or troubled themselves greatly with dogmatic subtleties. But a great many of them connected Romanism with the fires of Smithfield, the brutalities of Alva in the Netherlands, and the tortures of the Spanish Inquisition, or still more luridly after 1572 with the Paris massacre.

Romanists might indeed retort upon Protestants a few years later by pointing to Jesuit martyrs and to the sufferings of the Irish; but the English had then already learnt to look upon the Jesuits as traitors and upon the Irish as wild beasts, so that the retort fell flat. Nowhere outside of the northern counties was there ever the slightest sign that the mass of the people was Romanist in its sympathies.

In fact the question of the future was not whether England would revert to Rome, but whether Calvinism would dominate the Church in England as it very emphatically did in Scotland. In both countries, the secular government was antagonistic to Calvinism, and to the conceptions of Church government and of the relations of Church and State associated with the Calvinistic creed. On the other hand, intense hostility to Rome and to the active champions of Rome tended of itself to generate Calvinism, simply because Calvinism was the form of Protestantism which was most palpably irreconcilable to Romanism.

"No bishop, no king"
After the Bull of Deposition and the massacre of St. Bartholomew, active hostility to Rome increased and Calvinism in England became more aggressive. In part it merely took the shape of what was called Noncon­formity, the demand for the abolition of ceremonial observances which were looked upon as papistical, or at least for permission to dispense with them. But then there arose the demand for a change in the form of Church government on Presbyterian lines. This called for active repression, for the Crown held the doctrine, summarised in a favourite phrase of James VI, after he became King of England, "No bishop, no king."

Even within the Church organisation, certain of the advanced clergy constructed a Presbyterian organisation. Presbyterianism was to the full as rigid in its demand for uniformity as was the State itself, and sought to impose its own particular views on the whole body. It had no sympathy with the audacious individualism of the group who at this time began to be known as Brownists, and subsequently became exceedingly formidable under the name of Independents; a group which claimed freedom of conscience for each separate congregation, the right of each congregation to worship unmolested after its own fashion. In the sixteenth century, at least, such an idea appeared to be hopelessly anarchical, subversive alike of State and Church.

Now Elizabeth's first Archbishop of Canterbury was the typical moderate Matthew Parker; and Parker was succeeded by Grindal, whose sympathies were entirely with that party which in modern phraseology would be termed Evangelical.

Archbishop Whitgift
Thus at the time when he was succeeded in 1583 by Archbishop Whitgift, the Evangelicals were exceedingly active in the Church, while the tide of severe repression against the Romanists had just set in, in consequence of the great Jesuit mission. It appeared that credit for impartial justice would be the more readily obtained if Protestant indiscipline were sternly dealt with at the same time with Romanism. Whitgift was not so much a High Churchman as a rigorous disciplinarian, and his primacy was signalised by the establishment of the Court of High Commission for dealing with ecclesiastical causes, which had been sanctioned by the Act of Uniformity a score of years earlier, though it had never been actually constituted.

The Marprelate Tracts
The Court's methods were inquisitorial and arbitrary, and were clearly disapproved by Lord Burleigh. It enforced uniformity very much more rigidly than had been done in the past, with, the effect of intensifying the hostility of the advanced school to the episcopal system as an instrument of tyranny. Thence there issued a violent and unseemly onslaught on that system by the publication of a series of tracts signed Martin Mar-Prelate, in the year following the Armada.

The violence of the pamphleteers created a certain reaction, and this, coupled with the actual and fancied existence of all manner of Romanist plots, led in turn to increasingly severe legislation in 1593, directed against the Romanists on one side and the Nonconformists on the other. It should, however, be remarked in passing, that the Nonconformists did not seek to separate themselves from the Church, but remained professedly within it, while protesting against certain doctrines and practices; even as Cranmer had remained Archbishop of Canterbury while avowing to the king, at serious risk to himself, his personal adherence to views condemned by the Six Articles. These measures now resulted in the expulsion or emigra­tion, chiefly to Holland, of the determined Brownists.

The bulk of the Nonconformists, however, preferred obedience under protest to exile, and the Church parties became more and more differentiated as High Churchmen and Puritans, the names which afterwards came to be generally adopted to distinguish them. At the same time what may be called Liberal churchmanship was finding admirable expression in what is perhaps the first monumental work of English prose, the Ecclesiastical Polity of Richard Hooker, which exemplifies the attitude of all the greater minds of the day in England.