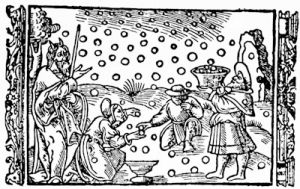 The Reformation in England was primarily the handiwork of Henry VIII its completion was the logical outcome of Henry VIII's policy, though it was by no means what that king himself contemplated. What Henry himself carried out was a revolution, not doctrinal nor moral but political. When he came to the throne, Western Christendom formed one single spiritual organisation.

The Church was co-extensive not with the State but with Christendom; since Eastern Christianity, the "orthodoxy" of the Greek, not the Roman Church, was in the Western view outside the pale, not pagan but heretical. Within the Western area all Christians belonged to that one organisation, and the only non-Christians tolerated were the Jews. Within the Church, so far as doctrine and practice were deemed, no diversities were permitted; nor did the State sanction the existence of Christian sects external to the Church. It followed that all individuals owed a double allegiance, to the Universal Church and to the particular State.

State over Church
The essential feature of Henry's Reformation was the repudiation by the State of the existence of any such double allegiance. The citizen owed allegiance to the State alone, or to the Church only subject to the State's sanction. It did not follow of necessity that the State would sanction one Church only. It might sanction one or many or none at all. The authority of the State might be repudiated, but it could and would enforce its de facto supremacy. It was not a matter of necessity, but it was practically a matter of course, that the State should sanction these circumstances one Church coterminous with itself.

In effect it treated the Church in England as the Church of England, the ecclesiastical expression of the State, though it did not quarrel with the liberty of churchmen to regard themselves still as members of the Universal Church, provided that they remained in practice obedient to the State control; and explicitly from Henry's point of view the State in this connection meant the Crown.

In the theory of the State there was no real change; the State merely asserted the authority which, it had always possessed. Such changes as were made were not organic but were simply administrative modifications. And this view that the Church retained its identity was made possible of acceptance by the Church itself, by the retention of the Ordination which gave continuity to the priesthood. Thus spiritually in the eyes of the Church, and legally in the eyes of the State, the continuity of the Church was preserved.

But diversity was contemplated no more than in the past. No one was to be permitted to separate himself from the Church; there were to be no external sects. Yet in the general intellectual ferment of Europe, immense uncertainties had arisen as to what doctrines and practices were positively enjoined, what were permitted, what were sanctioned as mere matter of convenience, what were immutable by the sanction of Divine law.

Definition was necessary or there would be chaos within the Church. Rome established her own definitions by the Council of Trent. England established hers by formularies prepared mainly by clerical commissions and sanctioned by the Crown and parliament. Of these formularies, the first was the Ten Articles of Henry VIII and the last the Thirty-nine Articles incorporated in the Prayer Book during the reign of Elizabeth.

Between these two stages there were violent fluctuations. But throughout the root principle remained the same; the definitions laid down with the sanction of the State must be accepted by all; departure from them subjected the recalcitrant to penalties which ranged from burning down to fines or dis­ability to discharge public functions. Definitions might be rigid or loose, penalties might be mild or severe, but within the scope of the definitions, uniformity was to be enforced.

Toleration in the sense that men were at liberty to follow the dictates of their own conscience was hardly dreamed of. But the characteristic of the formularies of Elizabeth, to whom it fell to make a finally acceptable settlement, was a wide latitude which admitted within the pale on the one hand followers of John Knox, and on the other men whom many Calvinists regarded as no better than Papists.

The State demanded from the laity only outward conformity, a decent observance of practices enjoined, abstention from practices forbidden. Privately a man might hold what opinions he liked, so long as those opinions did not materialise into actions or language subversive of the authorised institutions and doctrines. For some time even disobedience, un­less thrust upon the notice of the authorities, was to a great extent winked at.

Neither Romanist nor Protestant sectarians were much interfered with, unless they chose to be aggressive, until first the papal bull of deposition and then the Jesuit propaganda of Parsons and Campian brought Romanism under suspicion of treason, stiffened the enforcement of conformity, and brought all kinds of overt nonconformity under the ban.

<< The Tudors and Parliament - The Tudor Church - The Elizabethan Church >>