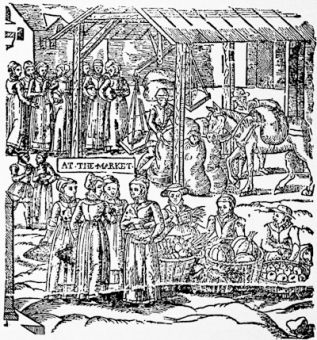 Mercantilism
The Tudors inaugurated the great period of English commercial expansion. Henry Vll made the development of the national wealth an explicit object of policy, the State operating by means of commercial treaties, although he did not hesitate to employ commercial wars as a means to securing quite other political ends. The root principle of the politico-economic theory known as Mercantilism was already being formulated, namely, that wealth is to be sought as a means to national power.

On this theory, then, trades and employments should be encouraged which tended to develop national strength; trade which enriched another nation was to be discouraged; the prosperity of a neighbour probably, of a rival certainly, was looked upon as injurious. The importance to the State of possessing a large amount of gold and silver gave rise to the doctrine that a trade which exchanged treasure for goods was bad for the country, but that one which exchanged goods for treasure was beneficial.

Balance of Trade
It became, therefore, the duty of the State to control commerce, to encourage or discourage it actively, with a view to maintaining the "balance of trade" that is, of securing an inflow of treasure greater than the outflow — the artificial development of industries regarded as beneficial, as, for instance, the manufacture of gunpowder and ordnance, and in particular the increase of shipping, which the England of the sixteenth century was learning to look upon as of quite vital importance.

The Navigation Acts
The principal means to the encouragement of shipping was found in the Navigation Acts, favouring goods exported or imported in English bottoms', and to these must be added the post-Reformation ordinances in­sisting on the Lenten fast — issued by Protestant governments even while they repudiated fasting on religious grounds as a papistical superstition — because employment was given thereby to the deep-sea fishermen and sailors, and so shipbuilding and the mariner's art were fostered. But the State left it to private enterprise to turn maritime energy to commercial account. After the first start, sailors and explorers owed nothing to the State, although Eliza­beth personally speculated in some of their ventures on terms exceedingly profitable to herself.

Perhaps, how­ever, we should qualify the statement that private enterprise was unaided. The government continued on an extended scale to employ the old method of granting monopolies in order to extend trade. Of these monopolies there were two types, those which were granted to mercantile companies, and those which were granted to individuals. In the past the great examples of monopolist Companies had been the Merchants of the Staple and the Merchant Adventurers, who had exclusive rights of trading in certain classes of goods in Western Europe.

Such monopolies were in fact a condition of the progress of trade, or at least appeared to be so. Other states practically excluded the foreign private trader, as did the English themselves. The trader was admitted only if he was an enrolled member of a Company which was responsible for his good behaviour and could be penalised if its members set rules and regulations at nought. To a Company which was under control privileges might be conceded.

A Company to which authority had been granted could control its members but unless the grant conveyed also a.monopoly, it would have no control over traders who were not members. It could not protect itself against the misconduct of such persons, while they, on the other hand, would have the utmost difficulty, acting as private individuals, in enforcing for themselves such rights as the law might concede to them.

Provided that the monopolist Company was open to all would-be traders on reasonable terms, it was ordinarily to the advantage of the private individual to trade under its aegis; while the Company itself was liable to suffer damage from illegiti­mate practices, if non-members were permitted to trade within its area. Commercial treaties were effective under the Company system, but would have been a dead letter without it.

Chartered companies
That was a state of things which passed away in Western Europe as the ordinary machinery of the law became sufficient to protect the community against the un­principled "free trader," the trader who was not a member of a Company, and to secure the individual in his rights even when there was no organised Company at his back to help him. But the maritime ex­pansion of the sixteenth century opened up new markets or new fields of enterprise, where the economic arguments which had warranted the old monopolies were more effective than ever.

The great bar to enterprise was insecurity, and a chartered Company could give a comparative security to its members. But the chances of profit were too precarious, unless the Company itself could protect itself from the reckless competition of the free-trading adventurer; in other words, unless it had a legal mono­poly.

So in Elizabeth's reign there began a multiplication of chartered Companies for trading in the more remote and less civilised portions of the globe. Thus the Eastern or Prussian Company was established for trading with the Baltic, the Muscovy Company for the Russian trade, the Levant Company, and, finally, on the last day of the year 1600, the East India Company.

Analogous to these were the patents granted for colonisation to Sir Humphrey Gilbert and Sir Walter Raleigh in America. These were the men who first conceived the mighty vision of a new England beyond the ocean, where Englishmen should find a hew home. The Spaniard had secured the treasure-regions of the south, and Englishmen were eager enough to.break through the Spanish monopoly, to join on their own account in the hunt for Eldorado; but Gilbert and Raleigh dreamed of something far different, something which was realised in those colonies which have developed into the United States of America.

To neither of them was it given to realise the dream. Gilbert tried vainly to plant a colony in the vague northern region known as Norumbega, but his ship foundered at sea when he was returning to England. After him his half-brother Raleigh spent wealth and brains and energy In the attempt to plant his colony of Virginia, whither he sent expeditions year after year, only to find each time that the last group of settlers had been wiped out. Only in the next reign, when Raleigh was eating his heart out in the Tower, was the colony of Virginia really created; the child of a commercial chartered Company.

Somewhat different was the basis on which trading monopolies were granted to private individuals. In theory, at least, the monopoly was granted in such cases with the direct object of creating industries which could only be nursed into life, industries in which the financial risks were too serious unless they were protected from competition, or which required the granting of special powers such as those which, in the nineteenth century, it was necessary to confer upon railway companies.

In practice, the system became liable to serious abuse, and occasionally, at least, the Crown conferred monopolies for the enrichment of private individuals where there was no adequate excuse for prohibiting competition. At the end of Elizabeth's reign the grievance had become sufficiently serious to threaten a rupture between the Crown and parliament; a rupture which was averted by the tactful skill with which Elizabeth promised to withdraw and prohibit obnoxious monopolies, although the promise 'was not in fact observed. The State sought to encourage new industries, as it sought to encourage commercial enterprise, by granting monopolies to the pioneers, but also by the introduction of foreign craftsmen.

In particular, privileges were granted to refugees from Alva's persecution in the Low Countries, where textile arts in especial were practised which had not yet been taken up in England, in spite of the great development of the cloth manufacture. It is probable that refugees from Antwerp introduced the cotton industry, although its great development was deferred for a couple of centuries.