Insurrections against William the Conqueror 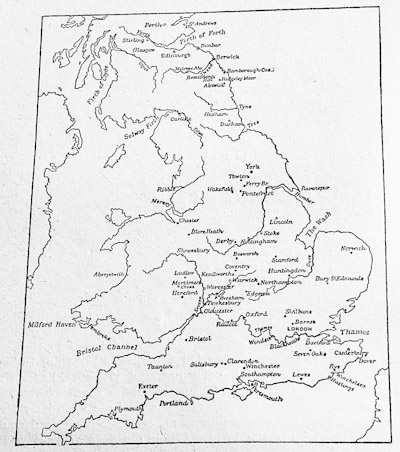 England and the Lowlands under Normans and Plantagenets

In the winter - we are still in the year 1069 -William ravaged westwards to Chester and Shrewsbury, and in the meanwhile the Danes came out of Holderness and sacked Peterborough, after which they made up their minds that there was no hope of a conquest and took their departure.

Hereward the Wake
The last struggle of resistance was left to the half mythical hero, Hereward the Wake, who formed his "camp of refuge" at Ely, whence he struck right and left at the Normans, and where he held out until the end of 1071. The traditions concerning him are faithfully embodied in Charles Kingsley's novel which bears his name.

Malcolm Canmore submits
The conquest may be said to have been completed in 1072, when William marched into Scotland and again obtained a submission from Malcolm Canmore, whose recent marriage to the AEtheling's sister Margaret was a somewhat serious menace to the peace at least of Northumbria.

The astute Scot dismissed Edgar himself from Scotland, at the same time counselling him to make his peace with William and become his man - advice which the AEheling subsequently took and never had reason to repent. But Malcolm at the same time got for himself a grant of lands in England for which he dd homage; and Scottish historians have always claimed that whatever homage was thenceforth rendered by a king of Scots to the English king, with one exception, was rendered not for the Scottish crown but for those lands south of the Tweed.

Redistribution of land
The long series of insurrections and their suppression meant the extension to all England of the principles which had been adopted in Wessex. Wherever there was a rising, lands were confiscated and bestowed upon Frenchmen, while only a few of the English were reinstated. Confiscations did not apply to the holdings of the ceorls, who remained in occupation, holding from the new French lord or the reinstated Saxon lord theoretically on the same terms as before.

The new lords were not permitted to build castles at large; the Norman 'keeps' were constructed by licence of the king. The effect of the piecemeal process of conquest and confiscation was that in each new region the lands were distributed among a number of Frenchmen; so that, although one man might be lord of a great amount of territory, his several domains were scattered up and down the country instead of forming one large unit.

Single estates in many cases corre­sponded to shires and formed earldoms; but no earldom was great enough to give the earl a chance of standing to the king in any such relation as the great feudatories of France, such as the Duke of Normandy himself, bore to the French king.

The fact may or may not have been due to deliberate policy on the part of the Conqueror; it is quite sufficiently accounted for as the natural outcome of the way in which the confiscations were carried out; but the practical effect was to secure the crown against the absorption of excessive power by any one vassal. The position of the crown was further fortified by its right of control over the marriages of vassals, so that the king could prevent a dangerous accumulation of estates by the marriage of a great baron to a neighbouring heiress.

The earls on the Welsh and Scottish marches were necessarily granted large powers because those regions were open to attack from Scotch and Welsh; but they would have had to act together in order to have any chance of resisting the Crown; and the power of every earl was checked by the power of the sheriff who, though frequently he was a great baron, held his office entirely at the king's pleasure.

1075 uprising
This situation was riot altogether pleasing to the great Norman barons; and when there was a rising in 1075 it was an insurrection not of the English but of the Norman barons, the Earls of Hereford and Norfolk, who inveigled Waltheof into their conspiracy.

Their grievances, as might have been expected, were connected with the prohibition of a marriage between the two families and the interference of sheriffs with what the earls regarded - as their rights. But Waltheof was an incompetent conspirator; his conscience got the better of him, and he revealed the plot to Lanfranc, the Archbishop of Canterbury, then acting as justiciar while the king was abroad.

The attempted insurrection collapsed, the English shire levies obeying the call of the government; as they habitually did when the Crown appealed to them against the barons, who were their immediate oppressors.

The last Saxon earl
The execution of Waltheof removed the last of the Saxon earls, since Edwin and Morkere had blotted themselves out in the days when Hereward was holding his camp of refuge at Ely; and there was no other attempt on the part of the barons to set William at defiance.

When in 1082 the king's half brother, Odo of Bayeux, began to form ambitious projects of his own, even although they were not ostensibly directed against the king, William threw him into prison and no one ventured to espouse the cause of the bishop.