The Normans and Saxon Law 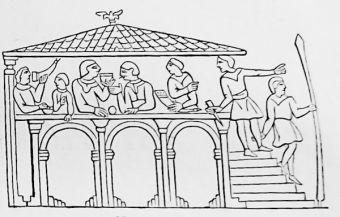 Normans at Dinner, from the Bayeux Tapestry

It is of fundamental importance to realise that in theory the system of the government of England was continuous and was not changed by the Norman Conquest. The old institutions remained. The Witan and the various folc-moots remained. The fyrd remained.

The ceorls occupied the land on the same tenure as before. The relations of the Church to the Crown and the Papacy were theoretically unchanged. But it is no less necessary to realise that in actual practice the changes brought about by the conquest were enormous.

At the root of these was the fact that the native magnates in Church and State were entirely displaced by foreigners. Nearly every great landowner or ecclesiastic was a foreigner, who interpreted his position and his powers in accordance with the ideas to which he was accustomed. They were foreigners, moreover, who looked upon the English as a conquered and inferior population; and the conquered population had no practical means of redress, what­ever brutalities might be inflicted upon them.

Commonly enough they sought redress by taking the law into their own hands, thereby bringing down upon themselves increased brutality at the hands of the lawless, and inviting severity at the hands of the government and of those officials whose business it was to enforce the law. Hence arose the one piece of legislation which formally distinguished between Saxon and Norman.

Murder of a Norman
An especially heavy penalty was imposed for the slaying of a Norman; and if the slayer were not discovered the hundred was liable for the whole fine. A hundred years later Richard Fitz-Neal explained in his Dialogue on the Exchequer that a murdered man was assumed to be a Norman unless proof was forthcoming that he was not; and, by that time the presumption was that any one outside the class of villeins had some Norman blood in his veins, because inter-marriage had become the general practice, and the two races outside the villein class were indistinguishable. But at the outset the effect must have been to intensify the sense of race antagonism.

Forest Law
Otherwise the legislative innovation felt most grievously by the English was the Forest Law, which introduced unheard-of penalties, especially that of blinding for the slaying of deer. William loved the tall deer as he had. been their father. Great tracts, notably the New Forest, were converted into game preserves, and villages and churches were desolated if they tell within the regions appropriated by the Crown to hunting.

Domesday Book shows clearly enough that the actual desolation was much less than later tradition made it out to have been; the real popular grievance was that hunting was forbidden where before it had been free, and poaching was savagely penalised. It is rather curious to observe by the way that William all but abolished the death penalty, though, on the other hand, a repulsive system of mutilation was substituted for it.

The last flame of the English resistance to the Conqueror was stamped out five years after he seized the throne. No long time elapsed before the insurrection of Roger Fitz-Osbern of Hereford and Ralph Guader of Norfolk - the latter apparently of mixed English and Breton descent, though he fought on William's side at Hastings - taught the barons once for all the futility of defying King William, the more emphatically because his own presence was not required for their suppression.

Administration during his absence was largely in the hands of Archbishop Lanfranc, for William himself was frequently occupied in Normandy, owing partly to dissensions with his eldest son Robert and with his nominal suzerain, the king of France.

Death of the Conqueror
It was while engaged in a war in Maine that the Conquerer met his death from internal injuries caused by the stumble of his horse. Normandy he left to Robert with whom he had. become reconciled. To the English succession he commended his second son William. To the third son Henry, the only one born after his accession in England, he left only five thousand pounds, in the confident conviction that he could take very good care of himself.

William in the eyes of his contemporaries
"A very wise man was King William," says the con­temporary English chronicler, "and very mighty; of a power and dignity greater than any that went before him. Mild he was to the good men who loved God, and beyond measure harsh to the men who gainsaid his will. Thrice every year he wore his crown as often as he was in England; and then were with him all the great men all over England) archbishops and bishops, abbots and earls, thegns and knights. Also he was a very stark man and cruel, so that none durst do anything against his will.

"Not to be forgotten is the good peace that he made in this land; so that a man who in himself was aught might go over his realm with his bosom full of gold unhurt. Nor durst any man slay another, had he done ever so great evil to the other. Surely in his time men had great hardships and many injuries. Castles he caused to be made and poor men to be greatly oppressed. He fell into covetousness and altogether loved greediness.

The great men bewailed and the poor men murmured thereat, but so stark was he that he recked not of the hatred of them all; but they must wholly follow the king's will if they would live or have land or property or even his peace."